Opposition leader Svetlana Tikhanovskaya set a deadline of October 25 for Lukashenko to leave office or face a general strike that will bring the country to its knees. Lukashenko has not quit.
By Ben Aris in Berlin October 26, 2020

The deadline of October 25 expired on Sunday, set by former English teacher and nominal victor in Belarus’ presidential election Svetlana Tikhanovskaya as part of the “People’s Ultimatum.”

The ultimatum demanded that Belarus' self-appointed President Alexander Lukashenko leave office by October 25, release all political prisoners and end the violence or else the entire country would come out in a general strike that will collapse the economy. Lukashenko has met none of these demands.

Tikhanovskaya’s ultimatum seems to have revitalised the protesters, which came out in record numbers on Sunday. There were over 200,000 according to media reports – twice the size of the early marches – but the numbers had been falling in the last weeks as the cold and wet autumn weather sets in.

The authorities were out in force as well, but as no route or destination was announced prior to the demonstration several large columns moved around Minsk at random. The police had closed all the roads in the capital and shut 12 of the central metro stations, but protesters simply changed direction when they encountered a roadblock, and as usual, simply overwhelmed the security services with the sheer number of people on the street.

“Today is the People’s Ultimatum, and by 23.59 our conditions must be fulfilled by authorities. I support each Belarusian going to the streets to protest peacefully. I will support today each official, law enforcement and security worker expressing solidarity with people,” Tikhanovskaya said in a tweet. “We demand that: 1. Lukashenko must go. 2. Violence has to stop. 3. Political prisoners must be released. Unless authorities deliver, Belarusians will start a national strike tomorrow on October 26th. Together we are stronger than any regime & we will return the law to Belarus.” 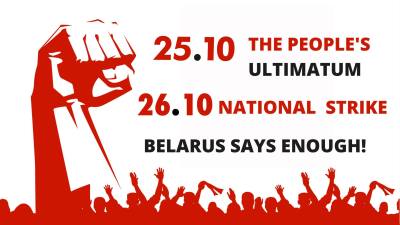 As the crowds began to break up and people made their way home the OMON moved in. Groups of demonstrators caught on the street by lines of OMON were assaulted by a battery of rubber bullet fire and stun grenades. The crowd turned and fled as the police fired on them running in pursuit.

Social media show similar scenes being enacted in several locations in Minsk. In another incident a 65-year old man was assaulted by police and later admitted to hospital with head injuries.

Lukashenko had answered Tikhanovskaya’s call to end the violence – one of the three demands of the day’s rally – by increasingly the violence to a new level.

Dialling up the tension

The People’s Ultimatum represents a dramatic dialling up of the tensions between the two opposing sides and came a day after Belarus’s Ministry of the Interior announced that it was authorising police to use live ammunition against protesters if they continued their “radical” demonstrations. Until now the weekly mass demonstration have been entirely peaceful on the side of the demonstrators and the only violence has been perpetrated by the police, and especially the OMON riot police.

Tikhanovskaya has been travelling throughout Europe to meet with EU leaders, presidents and prime ministers and lobbying them for support in the people’s showdown with the incumbent president, who massively falsified the August 9 presidential elections and refuses to leave office.

Tikhanovskaya has been showered with awards and the EU imposed targeted sanctions on 40 senior Belarusian officials from the Lukashenko regime on October 13, including the president himself. Most recently the Belarusian opposition was awarded the prestigious Sakharov Peace Price, set up in honour of the legendary Russian Soviet-era dissident Andrei Sakharov, who campaigned for peace. 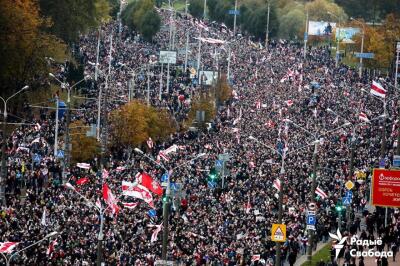 Tikhanovskaya’s authority on the line

In addition to touring European capitals, Tikhanovskaya has been speaking directly to groups in Belarus via video conference and preparing the ground for the general strike that is due to start on October 26.

The opposition initially called for a general strike on August 11, but few workers came out and those that did were quickly arrested. However, after two days of violence where the OMON brutally beat protesters one factory after another came out on strike from August 13 onwards in solidarity with the demonstrators. The strikes were a significant blow to Lukashenko, who has always counted the blue collar workers as his core supporters. The most striking example of the enmity Lukashenko managed to generate was when he was heckled by a crowd of factory workers during a visit to the MZKT truck factory on August 17.

However, Lukashenko managed to take back the initiative after Russian President Vladimir Putin's statement that he was willing to send a special military unit to quell the protests “if necessary” on August 27

In the meantime, the loyal factory bosses have been cracking down on the most militant striker leaders, who have either been dismissed or arrested. As bne IntelliNews reported, the strike movement has not managed to reach critical mass. Instead, workers have organised a so-called “Italian strike” where they come to work, but don't do anything, or even actively sabotage their factory’s equipment.

By calling for a general strike Tikhanovskaya has put her authority on the line. While rebel polling stations that reported the true outcome of voting in the August 9 elections and a statistic study based on the official results both show that Tikhanovskaya won the elections by a landslide, as the Central Election Commission (CEC) burnt the ballot papers there is no possibility for a recount. After Lukashenko organised a secret inauguration he has completed all the legal formalities necessary to take office.

What happens next will turn on how successful the general strike is. If the entire workforce comes out on strike then Lukashenko’s position will become untenable and if it fails the opposition’s campaign to force him out of office will receive a major blow.

Nevertheless, Lukashenko’s efforts to reassert his authority are not going well. On October 24 he tried to organise a mass rally to counter the regular weekend rallies organised by the opposition, where tens of thousands have marched against him.

According to reports, Lukashenko was hoping to gather some 30,000 demonstrators for his pro-regime rally by using coercion, bribes and threats. There have been a number of pro-regime rallies so far, but they have been small, numbering a few thousand at most. Reports on social media have shown that the state has used soldiers as faux-protesters and also that men in supposedly spontaneous rallies in the smaller regional towns and cities have appeared at multiple rallies, clearly bussed between the venues to pad out the numbers.

Lukashenko himself also appears to be preparing the ground for flight. There were unconfirmed reports that Lukashenko has sent large amounts of money to Arab banks in the last week, presumably in preparation for his exit. There were also confirmed reports that he has sent his children abroad to Turkey and one of his sons is reportedly now in an elite boarding school in Moscow.

At the same time, there have been unconfirmed reports that several of Lukashenko’s top lieutenants have been in touch with the Kremlin to prepare escape routes should the opposition manage to oust Lukashenko.