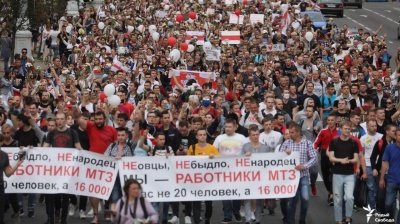 Workers at Belarus' biggest companies have been threatened with the sack or worse if they go on strike so they have started an "Italian strike" where they turn up but don't do anything
By Ben Aris in Berlin September 21, 2020

The opposition leaders called for a general strike in Belarus on August 11, two days after the disputed presidential election where the official results gave Belarus' self-appointed President Alexander Lukashenko a landslide win. A few brave workers heeded the call but were quickly arrested. But as more and more details came out of the brutal beatings dished out to detained protesters by the security forces emerged over the next few days after August 13 the workforces of one large state-owned enterprise (SOEs) after another came out on strike in solidarity with the rest of the population.

Striking SOEs is a body blow for Lukashenko. The blue-collar workers at the big Soviet-era enterprises have always been his core supporters. Lukashenko was swept into office in 1994, ironically on a platform of fighting corruption, and is widely seen as having fixed all the subsequent elections. Yet the irony of the situation is that he probably would have won a free and open vote anyway: the working people of Belarus appreciated the stability he brought as his neo-Soviet model preserved many of the better aspects of the Soviet cradle-to-grave care and basic services. Lukashenko managed to shelter his country from the worst ravages of the collapse of the Soviet Union.

But the brutality of the repression of the demonstrations between August 9 and August 13 was a step too far. The country was shocked by the viciousness of the attacks and the injustice. Lukashenko’s base abandoned him en masse. In a poignant moment he was heckled by the workers at the MZKT truck factory on August 17 who told him to his face: “Get Out.” It looked like Lukashenko was about to fall, until the Kremlin stepped in the next day and Russian President Vladimir Putin promised him help “if necessary”, which reversed his political fortunes and handed him back the initiative.

A standoff has developed. The general strike continues and is one of the biggest dangers the Lukashenko regime faces. If the incumbent cannot get the factories back to work, most of which are major sources of export earnings, the economy will collapse. However, the embattled workforce is facing ongoing harassment and pressure from the state, which is trying to force them back to work.

Under Belarusian law it is illegal to go on strike. So workers have adopted the more subtle tactics of an “Italian strike:” they turn up to “work” but then don't actually do anything. Moreover, factories across the country are suffering from “breakdowns” of key components of their production lines that bring the conveyer belts to a stop until “repairs” can be effected.

The constitution says: "Citizens have the right to defend their economic and social interests, including the right to form trade unions, conclude collective bargaining agreements (agreements) and the right to strike."

However, in accordance with Article 84 of the Constitution on the powers of the president, Lukashenko has the power to unilaterally postpone or suspend a strike on the grounds of a threat to national security, public order, public health or the infringement of the rights and freedoms of others. In effect Lukashenko can simply cancel any strike, which then becomes illegal, reports independent media outlet Belsat.

Protesting workers are now being actively targeted and are being threatened, fired or simply arrested.

Among the first members of the presidium of the newly established Coordinating Council to be arrested was Siarhei Dyleuski, who quickly rose to prominence as the leader of the striking workers at the Minsk Tractor Works (MTZ), one of Belarus’ most famous factories. The authorities accused him of organising a protest without proper permission and he was jailed for 25 days, only being released on September 19.

So far the strikes are holding, but as bne IntelliNews reported, they have yet to reach critical mass, as many workers, afraid to lose their livelihoods, are still at work.

“People began to be forced to work under the pressure. The most active were fired. They even threatened with physical violence the families of those who supported the strike, pressured through the leadership, trade unions ... There is no morality left. But this is impossible to do. And it is not necessary for the whole enterprise to become effective for the strike to be effective, ”said Yaroslav Likhachevsky, founder of the Belarusian Solidarity Fund, as cited by Belsat in a report on the plight of striking workers.

But the workers are getting creative and actively sabotaging their factory’s machinery.

“At [Belarus Metal Works] BMZ in Zhlobin, factory workers were forced to work. But suddenly the gas outlet collapsed, and only one of the three furnaces is working. And the gas outlet is being repaired very slowly,” Likhachevsky adds.

In a similar story at Grodno Azot, a massive ammonia producer that is one of four biggest companies in the country, this week a system failure has forced the company to flare off its ammonia to prevent a build-up in the system that could end in an explosion that would destroy the plant.

“My favourite story is [the] Gorodeysky sugar plant,” says Likhachevsky. “A super-poor enterprise whose management makes a lot of money off sugar. There people were very intimidated, and very strongly threatened. In the end, they gave up the strike. Three people from all over the enterprise quit. Only three. But these were the people who were in charge of the commissioning processes. And the equipment stood still there, as there was no one to start it. Eventually the management found someone to start it up, but the equipment immediately broke down.”

Reports of dismissals are coming in via social media from all the major enterprises. This week ten people were dismissed from the [Minsk Automotive Works], another giant enterprise, where the assembly line broke after their departure. Then the spray guns used to paint the cars broke, so now the cars have to be painted using brushes. Production has slowed to the point where the plant is producing as many cars in a week as it used to produce in a day, reports Belsat.

In addition to actively tampering with the equipment many workers are simply working to rule or going slow. At the potash mines in Soligorsk workers are going down into the mines, but do not fulfil the plans. The company has already failed to meet delivery obligations and will be penalised under the contract as a result. And these are massive contracts; Belarus accounts for about a fifth of the world’s potash production and is a giant player on the lucrative market.

The workers’ disobedience carries real risks. Workers can lose their jobs and in Lukashenko's neo-Soviet system, where all the big firms are owned by the state, that could mean they never work again. Or they can be arrested and face criminal charges and long jail sentences.

“In the worst case, people are not only fired, but also criminal cases are brought up. In such a situation, we help the victims to go abroad until this is all over. So the factory workers go to Lithuania, Poland, Ukraine, several people went to Latvia,” says Likhachevsky.

Society has rallied to the aid of workers dismissed from their jobs and crowdfunding campaigns have quickly raised tens of thousands of dollars to help the newly unemployed. Likhachevsky says workers can receive up to BYN1,500 ($750) as a one-off payment for immediate support from the NGOs if they are still in Belarus and not in any danger of arrest or retribution by the state.

Some analysts have speculated that the state’s policy of firing the most militant and active strike organisers will backfire, as they stay in touch with the strike committees at the enterprise and with nothing else to do they devote themselves to full time agitation.

“Those who were involved in the strike committees stay in touch with the enterprise. Such people have more trust among factory workers, they communicate easier with them than we do. Therefore it is much easier for us to work with factories through former employees,” Likhachevsky said.