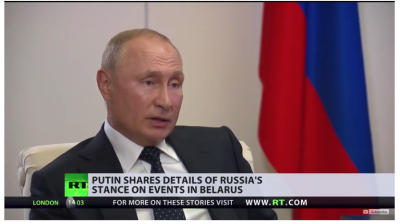 Putin: “Lukashenko asked me to form a certain reserve of law enforcement officers, and I did." / wiki
By Ben Aris in Berlin August 27, 2020 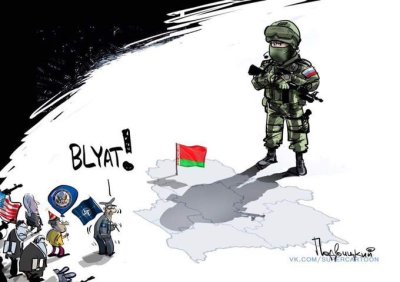 Russian President Vladimir Putin has said the Kremlin has a special reserve of police ready to send to Minsk “if necessary”. He spoke in a televised interview on state-run Rossiya 24 channel on August 27.

“[Belarus' self-declared President Alexander] Lukashenko asked me to form a certain reserve of law enforcement officers, and I did,” Putin said in the interview. “But we also agreed that it will not be used unless the situation gets out of control.”

Russian war correspondent Semyon Pegov said that this reserve of security services personnel included the MoD’s Special Operations Forces (SSO) who led the Russian operation in Crimea. They have reportedly been preparing for over a week.

Putin’s interview has provoked a storm of commentary, as some have argued that Russia is preparing the ground for a military intervention and will invade and annex Belarus.

A more nuanced read on Putin’s comments is that they are designed to undermine the resolve of the protesters that have taken control of Belarus’ streets and to sow discord amongst the Belarusian population.

Most importantly of all, Putin’s backing and promise of potential military aid will reassure Lukashenko’s most important constituents, namely the security forces, said Janis Kluge, an analyst at the German Institute for International and Security Affairs. If the OMON riot police and soldiers believe that Putin has Lukashenko’s back then a mutiny amongst the security forces is less likely.

According to some analysts, the Kremlin is keen to try to slow the revolution down and wants to avoid a sudden and disorderly collapse of the Lukashenko regime, which would have unpredictable results and give the Kremlin no chance to groom or promote a Kremlin-friendly alternative. Or at least to wring concessions and promises out of the existing opposition Coordinating Council ahead of a change in the constitution and fresh elections.

Simply the threat of military support will only entrench the stalemate between the two opposing sides and that will make the Kremlin a kingmaker as the only party able to break the deadlock, which is probably Putin's goal rather than to resolve the crisis through the use of force.

As bne IntelliNews contributor Mark Galeotti said in a recent column, "a military option is almost certainly off the table” as while Russia could easily take the country over by force, the effect would almost certainly be to unite the Belarusian people, who have remained largely pro-Russia so far, against the Kremlin, creating “a second Ukraine”. 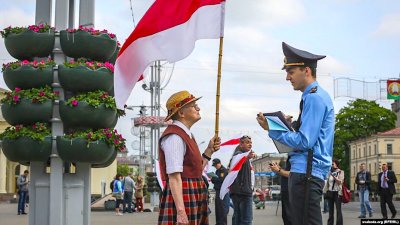 Belarusian pensioner Nina Bahinskaja, 74, is a permanent fixture in the Belarus protests, where she defies the police and OMON without fear.

Sending police or military support to keep Lukashenko in power would also almost certainly provoke a strong reaction by the West that would mean, at a minimum, a fresh round of harsh sanctions.

The EU has been renewing its 2014 sanctions regime on Russia and the US has introduced new sanctions, but these have become increasingly symbolic. For the last round of US sanctions imposed in connection with the poisoning of ex-spy Sergei Skripal in the UK, the bill included provisions to ban investors from buying and holding Russian Ministry of Finance ruble-denominated OFZ treasury bills, the government’s workhorse bond that it uses to fund the budget. It would have been an extremely painful move. In the final version of the bill, all references to OFZs were dropped and the only restriction was that US investors are not allowed to buy primary issues of Russian sovereign bonds, but there are no restrictions on buying and trading the same bonds in the secondary market. It is hard to imagine a weaker sanctions regime.

Lukashenko still faces the biggest threat to his 26-year rule since protests erupted across Belarus to demand his resignation following the August 9 presidential election, which he claimed to have won by a landslide.

The strength of the protests is the unanimity the people have shown, untied by the extremely simple and largely apolitical platform of former English teacher and nominal victor in Belarus’ presidential election Svetlana Tikhanovskaya, who is only calling for Lukashenko to step down and for fresh “real” elections to be held.

However, after the initial three days of police brutality, where the authorities tried, and failed, to cow the population into submission, a standoff has now developed. Lukashenko remains firmly ensconced in power, relying almost entirely on the security services' support, whereas the people have control of the streets.

The battle has become a series of skirmishes. The main tool the people have to exert pressure on the government is a general strike, where the workers at most of the state-owned enterprises (SOEs) have downed tools. That will inevitably cause an economic crisis, while the factory directors sack the most vocal strike leaders or the police arrest them.

At the same time, the authorities have been harassing the newly established Coordinating Council set up by Tikhanovskaya to negotiate a transfer of power and organise an interim government. The state has charged the council with trying to organise a coup d'état and two of the council’s members have already been arrested, while several of the other prominent members have been called in for questioning.

There is now a stalemate, as neither side can force the other to concede defeat and the clock is ticking for both. Ordinary Belarusians are poor and an economic crisis will hurt the regular man in the street more than the elite. But at the same time, as bne IntelliNews has reported, the Belarusian ruble is in freefall and the state is likely to rapidly run down its reserves, bankrupting the country. Lukashenko is also under time pressure to end the crisis. Banks in Minsk have already run out of dollars as a financial sector liquidity crisis looms.

Lukashenko has turned to Putin for support and he has already reportedly asked for a $1.6bn emergency loan to tide the government over.

The European Union has condemned the violent police crackdown on protesters, but has also vowed to keep out of the fight at the request of both Russia and Tikhanovskaya; the opposition are clearly very afraid of getting sucked into the geopolitical standoff between Russia and the West and have made numerous statements making it clear that they intend to maintain close and brotherly relations with Moscow, including adhering to the Union State deal signed in 1999 that would create a sort of Eurozone of the east between Russia and Belarus.

So far there hasn’t been the need for a Russian intervention, Putin said. But his comments represent a scaling up of the Kremlin’s support for Lukashenko. After the elections, the Kremlin initially offered lukewarm support, warning the West to avoid interference in Belarusian domestic affairs, but allowing the Russian press to report the story straight. Many Russian papers were very critical of Lukashenko and called on him to step down.

Putin also has the domestic reaction to the events in Belarus to consider and its potential to cause dissent at home. A poll by independent pollster the Levada Center that came out on August 27 found that Russians tend to back Lukashenko as president but don't want him to use force against the protesters, although most think he will.

While Lukashenko has been widely demonised in the West as the “last dictator in Europe,” it is important to realise that he has a much better reputation in the East, where he is credited with shielding the most vulnerable from the worst shocks of the economic chaos of the '90s. In a poll last year, Ukrainians named Lukashenko as their favourite foreign leader.