A general strike in Belarus could bring the Lukashenko regime down, but so far it has failed to reach critical mass 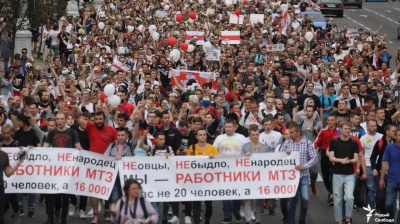 Belarus' general strike only took off on August 13 after the details of police brutality began to emerge radicalising even Lukashenko's most loyal supporters / wiki
By Ben Aris in Berlin September 4, 2020

The mass rallies that have filled the streets of Minsk for the last three weeks are inspiring, but it is the general strike by the blue collar workers, traditionally Belarus' self-appointed President Alexander Lukashenko’s core supporters, that could bring his regime down.

The extent of the population’s disapproval only really became apparent when workers at the biggest state-owned enterprises rebelled during the first week of protests and chanted “get out” to Lukashenko’s face when he was foolish enough to address the employees at the MZKT truck factory on August 17, supposedly a bastion of support. It was dubbed his “Ceausescu moment” by pundits and he quickly left, looking visibly shaken by the experience.

But the general strike took a little time to take hold and experts say that it has failed to reach the critical mass needed to force Lukashenko from office. The first call for a general strike was made by the Telegram channel Nexta, which has become the de facto organiser of the protest movement, on August 11. It flopped.

A few workers downed tools, but were quickly arrested by waiting security services agents and disappeared into the detention centres that consumed 6,600 protestors over the first three days of general protests, who were horrifically beaten, raped and tortured.

Taking a leaf out of the Polish Solidarity movement that brought Polish industry to halt in the '80s, paving the way for the collapse of Soviet control and which celebrated its 40th anniversary this year, most of Belarus’ biggest companies have been affected. Bring the economy to a standstill is one of the most powerful weapons the population have to force Belarus' Lukashenko to the negotiating table.

However, despite the popular outrage the strikes are partial at most plants as many workers remain intimidated by the threat of the sack and Lukashenko’s promise to lock them out of any future employment if they do down tools.

And Lukashenko is not going to give up without a fight. He has called for the dismissal of workers for participating in strikes. “We have surplus personnel at MTZ [Minsk Tractor plant], MAZ [Minsk Automotive Works], BelAZ [Belarus Automotive Works] – everywhere. Let them go! But after that there should be no place for them in factories,” Lukashenko said on August 15, adding that he would close all enterprises where a strike began. However, none of them have been closed yet.

He also threatened to replace the staff of state-owned plants with Ukrainian workers, in comments that immediately backfired. Having lived through two revolutions that ousted two presidents already, the head of a mining union in Ukraine quickly put out a statement that no Ukrainian workers would travel to Belarus and his union was with the Belarusian people.

But following Russian President Vladimir Putin's statement that he was willing to send a special military unit to quell the protests “if necessary” on August 27, Lukashenko has taken back the initiative and re-launched his campaign of intimidation in an effort to reassert his control.

It has been hard to assess how widespread the strikes have been and what impact they have had on Belarus’ leading enterprises. An investigation conducted by RBC estimated a total of 30 enterprises have been affected, although other estimates put the number at 150, which collectively have revenue equivalent to 27% of Belarusian GDP, based on last year’s results.

The irony of the Belarus protest being an “old school” traditional revolution where it is the working classes that are holding their oppressors to account has not been lost on commentators.

“I love the idea that the working class can be the backbone of the current revolutionary movement in Belarus,” wrote Renaissance Capital chief economist Charlie Robertson on August 14 as cited by RBC, as the strikes were picking up steam.

But the state continues to up the ante and is already carrying out reprisals against workers who refuse to work. “The shutdown of enterprises is not only a decline in wages, loss of markets and the closure of production facilities, unemployment, a fall in the ruble and a rise in prices. Who and what will say to those who have lost their jobs when a budget clinic or school is closed near their home? One day a communal apartment will double in size, and no one will take out garbage from the yard for weeks,” warned the State Secretary of the Security Council of Belarus Andrei Ravkov, who has just been replaced as Lukashenko shores up his control over the security organs.

Part of the problem is while workers' unions have always been around, they were developed as another mechanism of control and were a throwback to Soviet-era unions that were designed to give the veneer of a “Workers' Paradise” rather than be truly representative bodies of the workers’ interests.

Workers have come out on strike as individuals, appalled at the mistreatment of the people by the police, rather than being taken out on strike by national level union organisations. As a result, the strikers are vulnerable to threats by the enterprise managers who remain loyal to the state and who are singling out the most vociferous strikers for punishment and dismissal. In other reported incidents workers have simply been locked in on shop floors and not allowed to leave the work place.

Another tactic employed by workers to avoid retribution but nevertheless cause the state problems is the “Italian strike”, where they go to their work places but basically do nothing. However, it appears this tactic too has failed to catch on and has not been effective.

According to IMF estimates, state-owned enterprises create more than 30% of added value in the country's economy, which is significantly higher than in other Eastern European countries; for comparison SOEs account for 10% of GDP and in Russia 15%, according to RBC. According to the National Statistical Committee of Belarus (Belstat), at the end of March 2020 the state owned 3,220 legal entities and employed 1.25mn people from a total population of just under 10mn, or 42.8% of the total working population.

RBC concludes that much of the strikes are actually protests and the strike movement has not gained a critical mass that would put the government under sufficient pressure to force it into negotiations. Moreover, as time passes the authorities' pushback is already effectively undermining the movement as the most militant workers are removed.