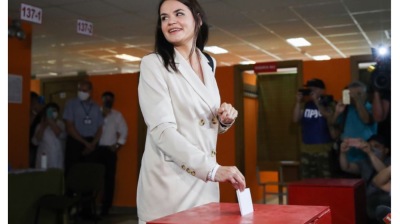 A statistical study into voting patterns in the August 9 Belarusian presidential elections suggests massive falsification, according to a paper released on August 17.

“In Belarus, thousands of protesters questioning the results of the presidential election were brutally beaten, detained and tortured. I did the analysis of the only available database of the precinct-level election results and found significant statistical anomalies,” tweeted Vadim Zipunnikov, the Associate Professor at Department of Biostatistics at the Johns Hopkins University.

The official results proclaimed that incumbent Belarus President Alexander Lukashenko won his sixth election by a massive landslide, taking 80.08% versus that of his challenger, former English teacher Svetlana Tikhanovskaya, who inflamed the country with an inspiring campaign.

“With almost a uniform absence of independent monitoring from the united opposition and independent media, the mounting evidence of widespread election fraud has pointed towards the advanced voting over a five-day period of August 4-8 as one of the major vehicle of the fraud,” said Zipunnikov.

The way these election studies work is that they look at the distribution of the votes, which should conform to an identifiable random distribution. However, election officials that stuff ballot boxes tend to round up the numbers to those that end in 5 or 0 when fixing the vote. In addition, when the authorities are aiming for a particular result, the distribution of results around that result become too concentrated to be truly random.

Zipunnikov found that the advanced voting stations recorded extremely high turnouts compared to historical data and the results were tightly clustered around specific results across the various stations, which are statistical anomalies.

Zipunnikov compared the reported results with the results from voting stations where the suspicious results were reported.

Zipunnikov found that every 7% of early voting ballots decreased Tikhanovskaya's result by about 8% and increased that of Lukashenko by the same amount.

Another anomaly the results carry is the very tight clustering of votes that again strongly suggests the results have been tampered with. 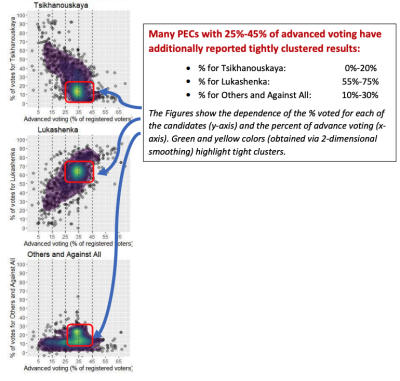 Again adjusting the results and removing the votes from polliing stations that have more than 25% advanced votes produces a much broad distribution of votes that are spread across a much bigger range, as you would expect from a random distribution. In the adjusted version Tikhanovskaya outperforms Lukashenko, although Lukashenko wins a lot more than the 3% some independent polls claimed he’d get. While Tikhanovskaya appears to be significantly more popular, the adjusted results suggest that the election may have gone to a second round had it been free and fair. 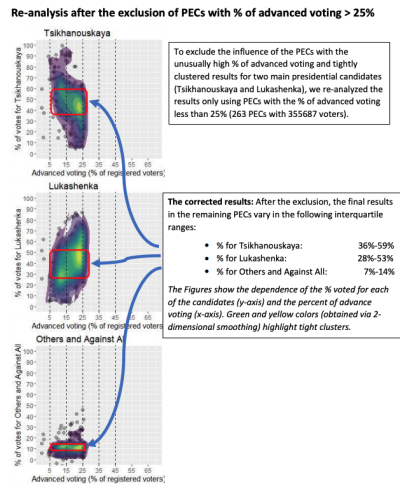