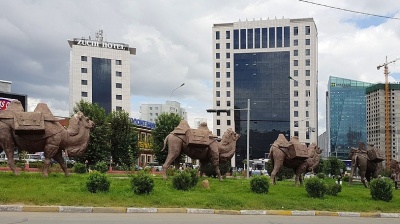 Ulaanbaatorians have got the hump with DBM. / Anagoria, cc-by-sa 3.0.
By Anand Tumurtogoo in Ulaanbaatar February 14, 2022

Many Mongolians have expressed outrage at figures that show around half of the loan portfolio of the state-owned Development Bank of Mongolia (DBM) is made up of risky or non-performing loans (NPLs). The greatest uproar stems from the fact that many borrowers placed in the risky category are well-known Mongolian business leaders with links to, or past service in, government or parliament.

DBM was founded in 2011. Current legislation states that the development bank must award at least 60% of its loans to recipients that boost Mongolian exports. The lender was formed with the goal of assisting the country's growth via export gains and the financing of import replacement projects and programmes. However, according to the data release dated January 31, fully 55% its loans were deemed risky or as NPLs.

DBM's total loan portfolio amounts to Mongolian tughrik (MNT) 3.1 trillion ($1.1bn).  Around one trillion tughrik of loans, ascribed to 28 borrowers, were subject to ongoing court action, the records showed. In addition, 14 borrowers were under investigation by law enforcement agencies.

Representatives of DBM said that lawsuits generally take a significant amount of time to resolve. Some disputes have been pending in court for 69 months.

A regular Cabinet meeting was held on February 9 and DBM’s finances were on the agenda. Deputy Prime Minister Solongoo Bayarsaikhan said in a subsequent press briefing: “The prime minister gave some directions to resolve the issues the bank is facing. Step-by-step, measures should be taken relating to the non-performing loans. Measures have achieved some results.

“DBM is an institution that supports export projects and programmes necessary for the development of Mongolia. Therefore, the government will continue to support DBM. The government plans to cooperate with law enforcement agencies and charge irresponsible borrowers. In this regard, the prime minister instructed that all possible support should be given to agencies of law enforcement.”

On February 11, policymakers, activists and everyday citizens concerned about DBM's NPLs gathered for a discussion hosted by local media reporters.

One anxiety voiced at the meeting was that the majority of the bank's financing derived from overseas issuers and was lent out in MNT; if repayments do not come through, the Mongolian taxpayer is required to cover the exchange rate difference.

Also during the gathering, Solongoo stated that the government would have to accommodate the redemption of an $800mn samurai bond, which must be paid through DBM: “The $800mn bond must be repaid by the end of next year," he noted. “Given that the samurai bond is backed by a government guarantee, DBM is compelled to repay the bond through contractual commitments. Due to the development bank's loan schedule breach, it may be impossible for it to repay the bond using its own resources. If the situation does not improve by 2023, the government may be held liable for repaying the debts."

After news broke of the risky loans, DBM put out a statement on February 11 stating that “from January 20 to February 11, the bank received repayments of up to MNT39.8bn”.