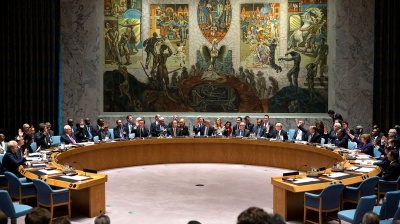 The UN General Assembly voted overwhelmingly to condemn Russia's attack on Ukraine. Only five countries voted against the motion. / wiki
By Ben Aris in Berlin March 3, 2022

An emergency session of the United Nations General Assembly voted overwhelmingly to condemn Russia’s attack on Ukraine on February 24. Only five members voted against the resolution on March 2.

The resolution called for the immediate cessation of hostilities and for Russian troops to withdraw further isolates Russia from the international community.

At the emergency session in New York a total of 141 of the 193 member states voted for the resolution, 35 abstained and five voted against.

"The message of the General Assembly is loud and clear: End hostilities in Ukraine – now. Silence the guns – now. Open the door to dialogue and diplomacy – now," UN Secretary-General Antonio Guterres told diplomats after the vote, adding: "The territorial integrity and sovereignty of Ukraine must be respected in line with the UN Charter."

Russian Ambassador to the UN Vassily Nebenzia urged members to vote against the resolution, saying the Western nations had exerted “unprecedented pressure” with “open and cynical threats” to get support for the measure.

“This document will not allow us to end military activities. On the contrary, it could embolden Kyiv radicals and nationalists to continue to determine the policy of their country at any price,” Nebenzia warned.

“Your refusal to support today’s draft resolution is a vote for a peaceful Ukraine” that would not “be managed from the outside,” he said. “This was the aim of our special military operation, which the sponsors of this resolution tried to present as aggression.”

The US delegation was outspoken in its criticism of Russia’s attack and said that it had evidence of Russia moving in illegal weapons, banned by the Geneva Convention.

"Russia is preparing to increase the brutality of its campaign against Ukraine," US Ambassador to the UN Linda Thomas-Greenfield said before the vote. "We've seen videos of Russian forces moving exceptionally lethal weaponry into Ukraine, which has no place on the battlefield, that includes cluster munitions and vacuum bombs, which are banned under the Geneva convention."

"The truth is that this war was one man's choice and one man alone: President Putin. It was his choice to force hundreds of thousands of people to stuff their lives into backpacks and flee the country. To send newborn babies into makeshift bomb shelters. To make children with cancer huddle in hospital basements, interrupting their treatment, essentially sentencing them to death. Those were President Putin's choices. Now it's time for us to make ours," Thomas-Greenfield said.

Ukraine's President Volodymyr Zelenskiy welcomed the vote, saying those who backed the Resolution had "chosen the right side of history."

Russia voted against the motion and was joined in its “no” vote by its allies Belarus, North Korea, and Syria. The African country of Eritrea also voted “no”.

The resolution is not legally binding, but is an expression of the views of the UN membership, aimed at increasing pressure on Moscow and its ally, Belarus. 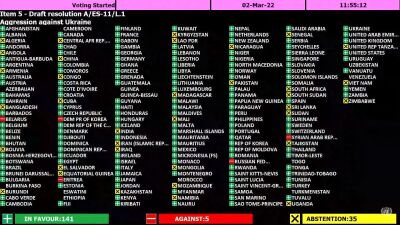 The vote follows a similar vote by the UN Security Council on February 26, which was vetoed by Russia. The Kremlin was also further isolated at that vote when both India and China abstained from voting, whereas all the other members of the UNSC, lead by the US, voted for the motion to condemn Russia.

The Kremlin was hoping for a more public display of support, especially from China, which it was hoping would also use its veto. However, analysts say that while China supports Russia in its opposition to the “unipolar” world led by the US, it will not risk its commercial interests and threat of sanctions by overtly allying itself with Russia in the midst of global condemnation.

India is in an even more difficult position, as it maintains good relations with the Kremlin and has significant commercial and military interests in Russia, which it does not want to endanger, but at the same time cannot be seen to condone Russia’s use of violence against Ukraine.

The need to balance commercial and security concerns with the global outrage over Russia’s unprovoked attack on Ukraine was seen in the UNGA vote.

All the Central Asian countries that have significant economic ties with Russia and several of them are also in the Collective Security Treat Organisation (CSTO) military alliance with Russia chose to either abstain or not vote at all.

Uzbekistan has especially difficult relations, as it co-operates with Russia as the country that guarantees Central Asian security, especially relevant in the face of the Taliban resurgence in Afghanistan, but is trying to maintain some distance from Russia and balance the interests of the major powers in Central Asia. Tashkent has resisted Russian pressure to join the Eurasia Economic Union (EEU) trade club, but Uzbek President Shavkat Mirziyoyev has gone out of his way to cultivate good relations with Russian President Vladimir Putin.

Turkmenistan didn't vote at all, which counts as abstaining. The other Central Asian countries also formally abstained.

Other countries in the Former Soviet Union (FSU) also took a similar fence-sitting position. Armenia abstained from voting against Russia. That country went through a coloured revolution and now has a democratic government lead by Armenia’s Prime Minister Nikol Pashinyan. However, with Russia as a neighbour and a key trade partner and source of energy, Pashinyan has been at pains to maintain good relations with the Kremlin. Armenia is also a member of the CSTO and relies on Russia for security, especially in the wake of last year’s Armenia-Azerbaijan war, which Yerevan lost. Azerbaijan, like Turkmenistan, didn't vote at all.

Pakistan also abstained. Last year the Kremlin has been promoting relations between Moscow and Islamabad and Russian Foreign Minister Sergei Lavrov paid a visit, the first in years.

Mongolia abstained. Mongolian officials have tiptoed around the issue of the war in Ukraine, and not openly condemned the aggression, afraid of endangering the country's gasoline provision from Russia. Mongolia imports 98% of automobile fuel from Russia.

The landlocked country is heavily dependent on Russia for logistics to export its mineral production as well as investment. In the midst of this crisis Gazprom CEO Alexei Miller announced on February 28 that the project to build the Soyuz/Vostok gas pipeline that runs from Russia to China via Mongolia would go ahead. Miller signed off on the agreement with Amarsaikhan Sainbuyan, the Mongolian Deputy Prime Minister, during an online meeting.

Russia enjoys strong support in Africa where it, together with China, is a major investor and maintains close ties with many of the countries as well as supplying many of them with arms.

Iran and Iraq both abstained from the vote. Russia under Putin has made big inroads into the Middle East, where it is seen as a balancing influence to that of the US, as well as an important energy partner. The Arab world in general has become a big investor into Russia, with many of the projects coming in via the Russian Direct Investment Fund (RDIF), which has also been sanctioned by the West.

Notably both Kingdom of Saudi Arabia and Qatar voted for the motion to condemn Russia’s attack on Ukraine. Both countries have become key Russian allies in recent years during a show-down with the US following the “shale revolution” that has seen America become a rival to the Middle East oil producers. And both are increasingly heavy investors into the Russian economy.

King Salman of Saudi Arabia paid a historic four-day visit to Moscow in October 2017 to cement rapidly improving relations as Russia changed a long-standing policy and began to co-operate with the OPEC cartel, signing up to production limiting deals to manage the price of oil in recent years.

Those relations are not perfect and took a blow after Russia walked out of the OPEC+ deal in March 2020, causing a major price shock, but the fences were mended later that year and the two countries maintain close ties.

Qatar has been a similarly good friend. In 2016 Russia’s Finance Ministry faced a crisis thanks to its inability to fill a RUB2 trillion hole in its budget thanks to a post-2014 crisis deep recession. Eventually it was bailed out by Qatar that bought a 19.5% stake in the state-owned Rosneft oil major for €10.5bn in December 2016. It later transpired that the “sale” was actually a loan that Russia later paid back.