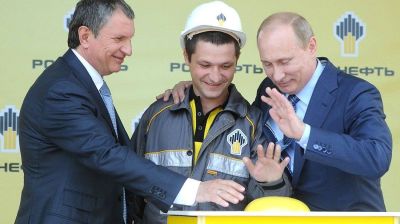 The deal will bring €10.5bn to the cash-strapped Russian government as it tries to close 2016 with a 3.7% budget deficit. It also ends weeks of speculation about what will happen to the stake in the world’s largest energy exporter’s largest crude oil producer.

“I want to thank all of you, all of your colleagues who worked on this, for this result,” Putin told to Sechin during the meeting later televised on the Rossiya 24 TV Channel.

According to the Financial Times, Swiss-based oil trader Glencore and Qatari Investment Authority (QIA) are setting up a 50-50% joint venture, with Glencore committing “just €300mn in equity with the rest of the money being provided by QIA and non-recourse bank financing arranged by a European bank, understood to be Intesa Sanpaolo”.

Glencore has a long track record of cooperating with Rosneft, such as signing a five-year oil supply deal (with another major trader Vitol) in 2012 for 67mn tonnes of oil, estimated at $10bn.

Most analysts had expected Rosneft to buy out its own shares and hold on to them after meeting the goverment’s deadline for the sale. Just as with the controversial acquisition of Bashneft by Rosneft in October, the sale of the 19.5% stake came suddenly, reflecting the behind-the-scenes nature of Kremlin decision-making.

In the run-up to the sale, former Russian economy minister Alexey Ulyukaev was arrested and sacked over bribery allegations and replaced, the real motifs of which still remain unclear. Ulyukaev had to sign off on the privatisation, but was taken into custody on November 15 and charged with trying to extort a $2mn bribe from Rosneft.

In his meeting with Sechin, Putin stressed that the deal was closed on the upward trend of oil prices following last month’s Opec oil production cut deal, for which he is also largely personally credited in the Russian media.

The issue of conversion of the Russian currency was also discussed, as Sechin was warned by the president about triggering strong ruble fluctuation as the foreign cash from the deal is exchanged. Putin urged the Rosneft head to consult with the Central Bank of Russia on the issue.

Just prior to the stake’s sale, Rosneft issued RUB600bn ($9bn) worth of domestic ruble-denominated bonds, reportedly to a single buyer, most likely a state-controlled bank, Vedomosti daily reported on December 7.

After the privatisation deal the Russian government retains a majority stake in Rosneft, with British Petroleum holding a 19.75% stake. The sale to Glencore and Qatar was financed by investors’ own funds, according to Sechin, and was also supported with financing from a leading European bank.

As part of the agreement, Glencore also agreed a five-year supply agreement with Rosneft, which will see the Russian company supply 220,000 barrels a day to Glencore’s oil trading arm, the FT reported. QIA is also Glencore’s biggest shareholder with a 9% stake.

In 2016, the ministry cashed over $5bn from the sale of Bashneft oil company to Rosneft, and plans to raise at least RUB300bn in privatisation revenues annually in the next three-year budget framework, according to Moiseev.

During Ulyukaev’s tenure at the head of the economy ministry, it spoke of plans to sell 25% plus one share in maritime shipping company Sovcomflot, 20% in Russia's largest sea port NSCP, 8% in diamond major Alrosa, as well as shares in Russian Railways, and the Sberbank and VTB state-controlled banks.

The appointment of new economy minister Maksim Oreshkin could give a boost to the privatisation programme. While previously working at the finance ministry, Oreshkin argued for reducing state influence in the economy, and is regarded as being pro-privatisation.

Analysts at Gazprombank see the fact of the sale to a foreign investor as having a positive impact on the share price of Rosneft since the company will not buyout its own shares, which would pressure liquidity and increase leverage.

The bank also welcomed the deal as the transfer of the funds to the budget will allow the finance ministry to limit transfers from the Reserve Fund and local debt placements to finance the 2016 budget deficit.

"From the standpoint of the balance of payments, the sale of Rosneft’s stake to foreign investors looks like a positive scenario," the bank wrote, noting that the impact of capital inflow of around $10bn will be limited on the Fx market as the funds will be received directly by the government.

At the same time, "the ability of a state-run company to attract any foreign investor could be perceived as indicating an easing of the so-called 'soft sanctions' regime in respect of Russia, which is a positive signal for the country’s capital account in 2017", Gazprombank believes.