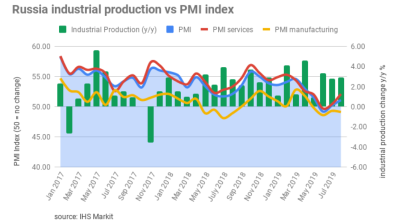 Business activity in Russia’s services sector expanded strongly to 53.6 in September offsetting the crash of manufacturing from 49.1 in August to 46.3 in September. / bne IntelliNews
By Ben Aris in Berlin October 3, 2019

Stronger business activity in Russia’s service sector has compensated for the crash in the manufacturing IHS Markit Russia Manufacturing Purchasing Index (PMI) in September, which just reported its worst results in a decade.

Business activity in Russia’s services sector expanded strongly, bringing the services PMI index up to 53.6 in September, rising from 52.1 in August. Anything over the 50 no-change mark is an expansion.

That compares with the manufacturing PMI which collapsed from a mild contraction in August of 49.1 to 46.3 in September – its worst result since 2009.

Taken together, Russia’s composite PMI index managed to improve slightly from 51.1 in August to 51.4 in September, as the strong activity in services lifted Russia’s overall score, Markit reported in a note.

The expansion of the services sector has held up Russia’s composite PMI score over recent years, partly driven by the explosion of e-commerce, which already accounts for 4.5% of retail turnover and is growing at circa 25% a year on aggregate, while the leading companies like Ozon are seeing growth rates on the order of 70% and 80%.

On the flip side the owners of manufacturing companies said that new orders have dried up in the last month and demand from foreign clients has also faltered, pulling down the index.

September data signalled a stronger business activity expansion across the service sector, with growth accelerating to a solid rate that was the fastest since March, reports Markit.

Supporting the upturn was a moderate, albeit relatively subdued, increase in new orders. Subsequently, firms expanded their workforce numbers for the first time since April. Nonetheless, business confidence remained muted and dipped to a six-month low.

This stands in contrast to the manufacturing sector where new orders contracted and owners laid off staff at the fastest rate all year.

A combination of factors have combined to keep inflationary pressures subdued, but falling demand in manufacturing has been a major contributor. Low inflation spilled over into services, further improving its position with increases in both input prices and output charges softening, also driven by efforts to remain competitive amongst owners. Cost burdens faced by firms rose at the slowest pace since the start of 2018. Output price inflation eased to a 19-month low.

The third quarterly service sector average signalled a stronger overall increase in output compared to the second quarter of 2019, says Markit. While the upturn was widely linked to greater client demand, panellists also said the rate of growth was still weaker than the series trend, which could indicate the index will fall again in the coming months.

New business increased only moderately in September, with the rate of expansion broadly in line with that seen in August and below the series trend, reports Markit.

External demand conditions also remained subdued in services, which was in keeping with what manufacturers are reporting. New export orders for services rose only fractionally in September and at a pace well below those seen earlier in the year. For manufacturing, weak external demand led to the sharpest decrease in new export orders for three years.

While manufacturing saw net layoffs, service companies were hiring in September, which has contributed to pushing unemployment levels down to a new post-Soviet low of 4.3% in August. Wages may be stagnating and demand is weak, but the Russian economy is enjoying full employment. September’s data brought to an end a four-month sequence of decline in staffing levels, with the rate of growth the fastest since March, but only marginal overall.

Russian businesspeople remain optimistic about the future, but as seems to happen every year in the autumn that optimism is beginning to fade somewhat.

Expectations towards business activity over the coming year dipped to a six-month low at the end of the third quarter, reports Markit.

“Although some firms stated that optimism stemmed from investment in marketing and new client acquisitions, others were downbeat about the outlook amid reports of difficult demand conditions for small- and medium-sized companies,” Markit said in a note.

Commenting on the PMI data, Sian Jones, economist at IHS Markit, said: “Russian service providers indicated a faster rise in business activity in September, despite only a modest expansion in new orders, as backlogs of work declined further. Although firms raised their workforce numbers for the first time since April, they expressed a lower degree of optimism towards future output. Firms highlighted difficulties facing small- and medium-sized firms.”