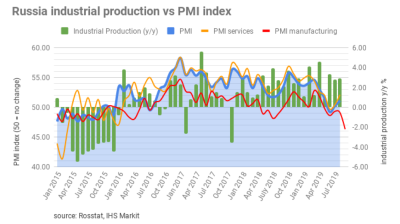 The Russian manufacturing sector registered the worst deterioration in operating conditions for more than a decade in September. The IHS Markit Russia Manufacturing Purchasing Managers’ Index crashed to 46.3 from 49.1 in August – the lowest level since 2009.

“The solid decline in the health of the Russian goods producing sector was the sharpest since May 2009. The latest quarterly average (48.2) signalled the worst performance across the sector since the second quarter of 2015,” Markit said in a press release.

Any PMI index result below the 50 no-change mark represents a contraction. September’s sharp contraction bucks the trend of a solid but modest recovery in manufacturing from earlier in the year.

Economists say that the poor business climate and the Kremlin’s failure to make deep structural reforms have constrained Russia’s growth potential to 1%-2% in the medium-term. The Kremlin is gambling on its May Decrees and heavy spending on the national projects to boost growth from 2021, but economists remain sceptical that this programme will make any real difference.

September’s production declines and a fall in new business were driving the fall as the nascent recovery seemed to stall in the summer months. Owners responded by sacking workers and business confidence tumbled to its lowest level since December 2017.

It is not clear if the fall in confidence is to some extent seasonal, as business uncertainty has risen in the autumn every year for the last three years. In 2018 business confidence as measured by a Rosstat survey was at -2 all spring and summer but sank to -8 in December. A similar pattern was seen in 2017 when business confidence actually broke into positive numbers for the first time since the boom years, before collapsing back to -5% December.

This year the Rosstat business confidence has been running at a modest -1 and more recently -2 level for most of the spring and summer, but if the Rosstat survey follows the same pattern as previous years – and the PMI results strongly suggest it will – then uncertainty amongst business leaders will rise sharply from here through to the end of the year.

However, the round of layoffs seen in September have not fed through to Russia’s overall unemployment, as the unemployment rate fell to a post-Soviet all time low of 4.3% in August, down from 4.4% in the previous two months. Even if the Rosstat unemployment rates tick up in September when they are released, the Russian labour market remains drum-tight and the country is still enjoys de facto full employment.

The lackadaisical production activity in the manufacturing sector is also contributing to faster than expected falls in the inflation rates. In 2018 inflation fell to another post-Soviet low of 2.3% but then grew in the second half of the year on the back of a very tight monetary policy as the Central Bank of Russia (CBR) prepared for another round of destabilising sanctions, which in the end failed to appear. Inflation started this year at over 5% — above the CBR’s target rate of 4% — but has been falling again throughout the first half of this year.

At the federal budget meetings this week Economy Minister Maxim Oreshkin announced that his ministry had reduced its inflation forecast for the second time in one month to end this year at 3.6% and 3% in 2020. This is less than the CBR’s own 4% to 4.5% estimate for the full year.

Just where inflation is going is the subject of a debate currently raging amongst the liberal faction. At issue is exactly what impact the release of large amounts of spending that come with the Kremlin’s RUB27 trillion 12 national projects programme will have, coupled with the rapid growth in consumer credits that the population have turned to this year in lieu of rising real income. However, the low levels of activity amongst the manufacturers suggest inflation will come out on the lower side towards the Ministry of Economy’s estimates than the CBR’s estimates at the moment.

Markit’s panellists reported that new orders suddenly slumped in September and demand was weak so there were difficulties gaining new clients, following much healthier demand in previous months.

Behind the slow growth in manufacturing is a stagnation in real income growth, which means consumption is playing a muted role in driving economic growth. What consumer spending there is at the moment is largely driven by credits. However, falling inflation will lift real incomes somewhat. The recent falls in inflation have already had a positive effect.

What improvement there was in disposable income can largely be ascribed to the fall in inflation as well as stronger growth of nominal unadjusted wages. Nominal wages rose 7.4% y/y in 2Q19, accelerating from 6.5% y/y in 1Q19 and up 7% y/y in the first half of this year – well ahead of inflation.

The steep decrease in total new orders was also reflected in a sharp fall in foreign client demand, reports Markit. The drop in new export orders was the quickest for three years and partly stemmed from greater competition for clients.

Despite the bump in the road panellists remain optimistic overall although there was a lower degree of confidence towards output over the coming 12 months in September, reports Markit. The optimism took a hit from the poor September results with positive sentiment dropping to its lowest since the end of 2017, reports Markit.

Finally, lower production led to a fall in purchasing. The solid decrease was also reflected in a sharp decrease in pre-production inventories. Lower new order volumes also resulted in a decline in stocks of finished goods.

Siân Jones, economist at IHS Markit, which compiles the Russia Manufacturing PMI survey, commented: "The deterioration in operating conditions across the Russian manufacturing sector gathered pace in September, as the PMI dipped to its lowest since May 2009, following the sharpest contractions in output and new business for over a decade. Weak domestic and foreign demand conditions also weighed on output expectations for the coming 12 months, as business confidence slipped to the lowest since December 2017. Subdued inflationary pressures, lower domestic demand and a global manufacturing slowdown have been highlighted by the Central Bank of Russia as key factors behind the recent cut in interest rates. We also expect further reductions to the policy rate going into 2020."