Russia’s manufacturing PMI still in the black, but down slightly from June 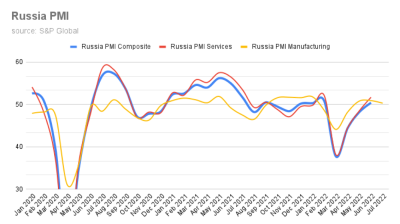 The seasonally adjusted S&P Global Russia Manufacturing Purchasing Managers’ PMI Index was still in the black with 50.3 in July, but down slightly from 50.9 in June. (chart)

The latest index reading signalled only a slight improvement in the health of the Russian manufacturing sector, which has done surprisingly well in light of the extreme sanctions imposed on Russia, albeit the growth was the slowest in the current three-month sequence of expansion, says S&P.

“July data indicated that operating conditions improved only fractionally in the Russian manufacturing sector. Weighing on overall growth was a sharper contraction in output as firms struggled to hire and retain workers amid salary competition. Subsequently workforce numbers declined,” S&P said in a press release.

At the same time, inflationary pressures remained subdued. The CBR more than doubled interest rates to 20% on February 28 following the invasion of Ukraine, and successfully nipped inflationary pressures in the bud. Since then the CBR has been able to cut rates four times, bringing them back below the pre-war level to 8%. Russia is now the only country in Europe where inflation is falling. Cost burdens rose at the second-slowest pace since February 2020, reports S&P, with softer increases in input prices reflected in a solid decrease in selling prices.

Contributing to the lower headline figure was a sixth successive monthly contraction in production during July.

Russian manufacturing firms registered the sharpest fall in output since April, as companies noted raw material shortages and relatively subdued demand conditions. Some firms also noted challenges hiring and retaining employees. Unemployment was at a record-breaking 3.9% low for the second month in a row, reported RosStat.

Although new order levels increased at a faster pace, Russian goods producers recorded a renewed fall in employment during July. The fall was marginal overall, but contrasted with the expansion seen in June. Where a decrease in workers was noted, firms linked this to challenges retaining and hiring staff due to salary competition.

The average nominal wages rose 10% from a year earlier to RUB62,457. In dollar terms, thanks to the strong appreciation of the ruble, nominal wages rose to $943 per month in May from $777 the month before, adding to the improving consumer sentiment. (chart)

“Despite being slower than the series average, the rate of expansion in new orders was the sharpest since April 2019. The rise in total new orders was largely focussed on the domestic market as new export orders fell further. The rate of contraction in foreign client demand was strong overall, but the slowest since February,” S&P reports.

Pressure on operating capacity was limited, however, as backlogs of work declined again. The rate of contraction in the level of work-in-hand was the quickest for three months, reports S&P.

Meanwhile, input prices rose at an historically muted pace in July. Although quickening slightly from that seen in June, the rate of cost inflation was far slower than earlier in the year and was the second-softest since February 2020.

Softer upticks in costs were reflected in a decrease in selling prices at the start of the third quarter. Output charges fell for the second month running and at their steepest pace since January 2009.

Business confidence across the Russian manufacturing sector picked up in July, S&P panellists told the consultant. The level of optimism regarding the outlook for output over the coming 12 months improved to the strongest since February. Hopes of greater stability in domestic economic conditions and further increases in new orders supported positive sentiment.

Price increases and unfavourable exchange rate movements led firms to rein in their input buying during July, as purchasing activity fell at the sharpest pace since March.

In line with a fall in input buying and the use of stocks to supplement production, both pre- and post-production inventories declined at faster rates.