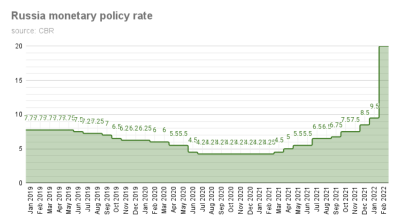 The Central Bank of Russia (CBR) put in an emergency rate hike, more than doubling interest rates to 20% from 9.5% previously, in an effort to put a floor under the collapsing national currency on February 28.

Separately, France’s Societe Generale and Switzerland’s Credit Suisse Group announced they have halted the financing of commodities trading from Russia on concerns about the widening impact of sanctions, Bloomberg News reported.

The two banks, key financiers to commodity trading houses, are no longer providing the money needed to move raw materials such as metals and oil from Russia, the report said.

The ruble tumbled over the weekend after the EU announced sanctions on the reserves of the CBR on February 27. According to the European Union's top diplomat Josep Borrell, up to half of Russia’s $643bn in gross international reserves (GIR) could be seized and made unavailable to the country.

The ruble was trading at cRUB84 to the dollar before the measures were announced but started trading at RUB108 on the first day of the working week. Analysts say that the rate could fall below RUB115 later during the day, or further. The CBR has temporarily closed the exchanges due to extreme volatility on the market. The stock market has also been closed and the CBR ordered brokers not to process sell orders from abroad nor individual sell orders for the meantime.

The CBR said: “the rate hike is designed to offset increased risks of ruble depreciation and inflation,” in a statement, added it is “ready for further action.”

CBR said that Governor Elvira Nabiullina will hold a briefing at 1300 GMT later on February 28.

Meanwhile, Reuters reported that the Russian Finance Minister will decide whether to order exporters to sell foreign exchange revenues on the market in a move that is tantamount to the introduction of capital controls to shore up the currency.

Russia used a foreign exchange “surrender requirement” rule in the 1990s in an effort to rebuild depleted gross international reserves (GIR) following the collapse of the Soviet Union, where Russian companies earning dollars from exports were forced to surrender at least a third of their revenues to the Central Bank.

The reintroduction of the surrender requirement rule is an extreme reaction and brings back part of the infrastructure associated with the chaos of the 1990s, the end of which is one of the greatest achievements credited to Russian President Vladimir Putin.

The Russian ruble had crashed over 40% by the time of writing on the morning of February 28.

The ruble fell to a record low of 119.00 against the dollar in early trading but the CBR has already intervened and the emergency rate hike had brought the exchange rate back to near RUB82 as of 9:30am Moscow time.

The last time the CBR introduced an emergency rate hike was during the oil price shock crisis in 2014, when the ruble also crashed through the psychologically important RUB80 to the dollar mark, increasing the overnight rate to 17%. It took seven years to unwind that hike, with the rates finally falling to a post-Soviet low of 4.25% in July 2020.

Analysts were expecting one more rate hike this year, before Russia’s attack on Ukraine on February 24 sparked the current crisis, saying the current tightening cycle had come to an end. However, the EU’s sanctions on the CBR’s GIR have changed the rules of the game, plunging Russia into its worst crisis in almost a decade.

Inflation was 8.73% in January but it is also expected to spike now, on the feed through from the collapse of the currency against the dollar.

The 20% overnight rates will also kill off economic growth for this year. Previously economists forecast growth of 2.2%-2.4% for this year but following the invasion of Ukraine Capital Economics is now forecasting a 5% contraction – or more.