MOSCOW BLOG: Putin promises to take out the garbage in his annual phone-in 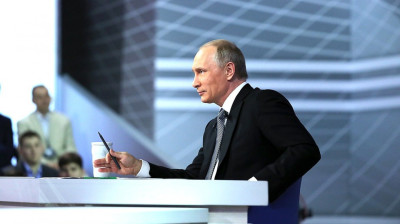 Putin promises to take out the garbage in his annual phone in amongst many other promises to improve the average Russian quality of life
By Ben Aris in Berlin June 20, 2019

Russia faces protests and widespread social unrest if the government fails to pull off its economic transformation that is the goal of the RUB25.7 trillion ($390bn) investments planned for the 12 national projects, former finance minister and Audit Chamber head Alexei Kudrin warned on June 19.

Kudrin reiterated that the Russian economy is stagnating after growth in the first quarter came in well below expectations and expanded by only 0.5% year-on-year in the first three months of the year and real incomes have been flat or falling for six years in a row. And it could get worse: Fitch Ratings just downgraded the GDP growth outlook for 2019 to 1.2%, whereas the government started the year predicting growth of close to 2%.

These were the issues that Russian President Vladimir Putin faced during his annual phone-in where he attempts to address the questions and concerns of the population. His answer was to promise to take the rubbish out.

"Rubbish dumps have kept growing ever since the breakup of the Soviet Union,” Putin said during the phone-in that was reportedly watched by three quarters of the population. “What makes the situation still worse is that our society has largely turned itself into a consumer society. New packaging materials have emerged. Alongside packaging paper and cardboard there are much plastic materials. These are an enormous problem. We will address this issue, of course," Putin said.

Not really the sort of rhetoric one associates with dictatorships, but despite the accusations of authoritarianism, Putin’s regime has perhaps its weakest hold on power since he came to office two decades ago and as a result the government have become a lot more responsive to popular demand.

The propensity to protest is on the rise and the Kremlin is clearly nervous. When investigative reporter Ivan Golunov was arrested early in June on trumped up drug charges the Kremlin quickly backed off when spontaneous protests were held outside the court and in an unprecedented outcome the charges were dropped a few days later. Likewise, there have been a series of local protests against landfills in the region and in one case against a decision to build a church on a park, where the authorities also rapidly backed down.

Concern about the environment has rapidly risen in importance as a Russian domestic issue and was the subject of many questions. And this public pressure is producing results and forcing the Kremlin to become more responsive. It was the environmental issue that drove protests in the Baltics and led directly to their decision to leave the Soviet Union, precipitating the breakup of the USSR. The landfill protests have the potential to be a flashpoint for Russia and the Kremlin has already acted to contain the problem and set up a national rubbish management company at the start of this year, pouring real resources into it.

“No one wants to have a landfill near their home,” Putin told one viewer complaining about a local landfill. “But you have to take into account the costs and the amount of rubbish. But we have a multi-year plan and 200 recycling plants that are being built at a cost of RUB300bn – and not just public money, but private investors too.”

In the same week Moscow announced new rules to make Muscovites start separating their rubbish for recycling and transition to citywide recycling collection by the end of the year, the city government said. Separate bins for recyclable materials will appear in the courtyards of all residential buildings by January 1, 2020.

While the few purely political rallies organised by people like anti-corruption blogger and opposition activist Alexei Navalny are rapidly crushed, the protest movement is large and alive and well in the region. The authorities are a lot more careful when it is ordinary people on the streets demonstrating about mundane local issues and often back down rather than risk radicalising local populations.

Medicine and medical services also featured big on the agenda. There were relatively frank reports on the poor state of medical services in the small regional towns and promises of help from the centre. Putin repeated promises from earlier speeches to up the spending on cancer treatment and research.

"Speaking about financing and, most importantly, oncology, a significant increase has been reported," Putin said. "We have doubled financing for the purchases of oncology treatment medications. The figure for chemotherapy stood at RUB80bn and now it equals RUB150bn."

Putin’s national projects are designed to address these issues and materially improve the quality of life in Russia. In the previous call-in the sharp rise in petrol prices got 15 minutes of discussion as the issue du jour, but this time issues like health care and the national projects were the main focus.

Kudrin warned of a possible “explosion” of protests caused by falling living standards and widespread poverty. The only way to prevent this is if the national projects are successful in transforming the country’s economic system, Kudrin added.

“For the past six years, the country has not taken advantage of the opportunities, and our share in the global economy has fallen. We have not become more competitive and efficient. We are in a state of economic stagnation that doesn’t lend itself to optimism,” Kudrin said.

Putin’s regime is increasingly facing an existential challenge due to the decaying standard of living. Only 17% of Russians believe the economic situation in the country is improving, while 41% think it’s getting worse, according to a survey published this week by the Moscow-based Public Opinion Foundation (FOM).

Likewise, while Putin’s personal popularity remains above 60%, the population’s trust in Putin has fallen to 31.7% — the lowest level since he took office, according to the state owned pollster, the Russian Public Opinion Research Centre (VTsIOM).

The call-in is closely watched by international observers but this year was almost exclusively about mundane domestic issues like collecting trash and providing enough doctors. Putin kept his comments on international affairs to a minimum saying that western restrictions had cost Russia $50bn, but they had cost the European Union more – some $240bn – in missed opportunities since 2014.

"According to expert data, western restrictions cost Russia $50bn in missed opportunities over the years, starting from 2014, the European Union [lost] $240bn, the United States lost $17bn, though our turnover with them is small, and Japan – $27bn. All this affects jobs in these countries," he said.