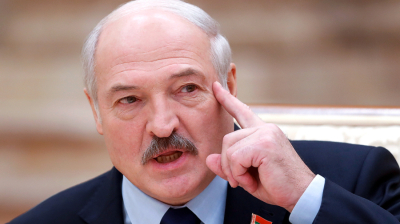 Belarusian President Alexander Lukashenko has closed the borders with his western neighbours and sent three of his top aides to western regions to shore up defences in a piece of political theatre he hopes will rally support behind his cause. / wiki
By Ben Aris in Berlin October 30, 2020

Border crossings to Poland, Latvia, Lithuania and Ukraine were all closed to anyone other than Belarusian citizens and diplomats, with the authorities citing the escalation of the coronavirus (COVID-19) infections as the cause. The border with Russia remains open.

Lukashenko also sacked his interior minister and named three security hawks to new prominent roles as the strongman president attempts to tighten his control over the system that has failed to quell a popular protest demanding his resignation.

Lukashenko had already shaken up the government before the presidential elections on August 9 that were massively falsified to give the incumbent a landslide win. Lukashenko reshuffled the government again shortly after the protests broke out following the election. On both occasions Lukashenko promoted people with security service backgrounds to top jobs.

This is not the first time that Lukashenko has threatened to close the borders in his disputes with his neighbours, which have all come out in support of the opposition led by Svetlana Tikhanovskaya, who is now in exile in Lithuania. He even announced on September that the border with the Baltic states had been shut, only for it to transpire that the actual order was never issued by the government.

This time he seems to have followed through and the neighbouring states report that traffic over the border has been halted. Cars going into Belarus were barred from entry from 14:00 GMT, and in few hours the border was closed for outgoing cars, Rustamas Liubajevas, chief of the Lithuanian border guard, told Reuters. The change came without an advance warning, he added.

On the same day, Interior Minister Yuri Karayev was sacked and replaced by Ivan Kubrakov, who was head of police and led the crackdown on the biggest demonstrations in Minsk in the first days following the disputed election.

Karayev was one of three men named as presidential aides and inspectors responsible for key regions of Belarus, as Lukashenko attempts to shore up his control of the country and respond to the mass protest that take control of the streets of all the major towns and cities each weekend.

Barsukov will be responsible for Minsk, Vakulchik for Brest on the Polish border and Karayev for Grodno, near the borders with Poland and Lithuania, reports Reuters.

Lukashenko has also ordered the strengthening of armed volunteer militia, which have terrorised the largely peaceful protests with random acts of violence.

The president appears to be preparing for a counter-offensive after Tikhanovskaya’s call for a general strike to start on October 26 seems to have flopped, undermining her authority and puncturing the momentum of the protest movement.

While workers have downed tools in many factories, the strike has failed to reach critical mass and most of the biggest state-owned factories appear to be still working, albeit at reduced levels of productivity.

Commenting on Lukashenko’s decision to close the borders and shake up his security team, Tikhanovskaya said: “The regime destroys itself. Both the closure of the borders and the next appointments are signals of a weakening of his power. He makes inconsistent decisions because he is in a panic,” she said in a statement as cited by Reuters.

Security forces have arrested more than 16,000 people since the presidential election according to local NGOs, with more than 1,000 being arrested at the weekend.

There is almost certainly a large element of political theatre motivating Lukashenko’s actions that plays to his constant refrain that Belarus is facing an existential threat from the Nato member countries on his western border.

Last month Lukashenko put the military on full alert in the western part of the country as he attempted to fan the flames of fears that Belarus was about to be invaded by its neighbours and that Nato and the US were funding the insurrection.

Taking a leaf out of the Kremlin’s play book following Russia’s annexation of Crimea in 2014, Lukashenko is hoping an “enemy at the gate” threat will rally support in his favour.

Closing the borders and dispatching three of his top lieutenants to the western border regions to beef up security there all play to this theme. However, the move also smacks of frustration, as there is no actual threat from the West and by removing three of his top men from the real centre of the conflict – Minsk – he will probably weaken his hand.

Lukashenko’s position remains tenuous, as his only real hold on power is his control of the security services and the violence they can inflict on the protesters. Weakening his control over that apparatus is a dangerous game to play.

Russia also appears to be supporting Lukashenko and Russian President Vladimir Putin’s statement on August 27 that he was willing to send a special military unit to quell the protests “if necessary” prevented Lukashenko being ousted in the first weeks of the protest. But since then Russia has done as little as it can to help Lukashenko. The two loan restructuring deals worth $1.5bn transpired to be little more than accounting tricks that simply moved Belarusian debt to large Russian corporate entities off their books and on to the sovereign balance sheet, while no desperately needed fresh cash was made available. The only cash loan that the Kremlin has made to Lukashenko of $500mn is a third of the $1.4bn of cash the population has withdrawn from the banking system in the last two months. There are already anecdotal reports that the state-owned enterprises (SOEs) and already having trouble paying wages.

Addressing the three new aides, Lukashenko said they were heading to “very important” areas of the country “in connection with the events that have occurred and are not yet over – we still don’t know what this may result in,” in remarks cited by Reuters. “Why you? You are military people. You’re knowledgeable. You don’t need to be brought up to speed and taught.”

Government claims three quarters of foreign companies in Russia are still working
6 hours ago
Moldova says it won't be able to make next payment to Gazprom
6 hours ago
Russia resumes oil supplies to Slovakia and Hungary but imports to Czechia remain halted
6 hours ago
US charges Iran operative with plotting to kill former Trump hawk John Bolton
15 hours ago
Ukraine will receive $5.5bn in support from the US later this month
1 day ago