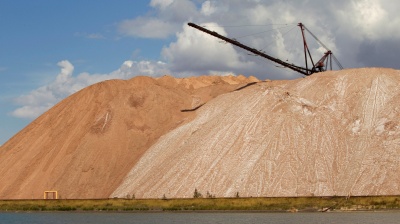 Potash heaps in Belarus. / reuters.com
By bne IntelliNews May 3, 2022

With Belarus being the world’s third-largest potash producer, the global potash market has been uneasy ever since the EU and the US along with their western allies sanctioned its potash sector. Since the war started and sanctions have mounted around it, major importers are actually beginning to move away from Belarusian potash.

2022 – a troublesome year for Belarusian potash

During February alone, Belarus was cut off from its potash export routes, both to the north through Lithuania and to the south through Ukraine.

On March 21, independent Belarusian media reported that three out of five mines of Belarus’ largest potash producer Belaruskali had stopped their work due to the lack of export routes; the company was even reported to be taking out loans to pay salaries.

Potash makes up a large part of Belarus’ exports. Together with sanctions on other sectors and the withdrawal of foreign companies from the Belarusian market, Belarus’ export-driven economy has contact with a lot of its export markets. Due to sanctions, Belarus is already estimated to have lost 70% of its exports to the EU alone.

China (whose third-largest potash supplier is Belarus) has had problems with its potash supplies since the war, while last year’s sanctions were relatively calm.

Earlier this year, the executive director at China’s state fertiliser producer Sinofert, Feng Mingwei, was quoted as saying that current sanctions will not have an impact on China’s supply of potash fertilisers due to domestic stocks. This indicates that while it has sufficient domestic stocks, there is an impact on its imports.

Brazil, which imports about 20% of its fertilisers from Belarus, had to cancel its imports after Lithuania halted the transit of Belarusian potash.

This resulted in Brazil’s agriculture minister declaring fertilisers a matter of national security and made the country look into developing its own production and exploiting the largest potash mine in Latin America. This means that even if Belarus finds a new way of exporting its potash, it might permanently lose one of its largest markets in the long run.

Just before the war in Ukraine, the latter’s state-owned company Ukrzaliznytsia announced that it would no longer transport the output of Belarus’ largest potash producer Belaruskali through Ukraine anymore.

This blockaded trade route has not only affected Belarus’ potash supplies to several EU countries (Slovakia, Hungary, Austria, Romania) but also to several other post-Soviet countries. And after Lukashenko’s alliance with Russia in invading Ukraine, this decision will surely not be reversed.

After the US imposed sanctions on Belaruskali on 8 December, 2021, supplying India immediately became a lot harder for Belaruskali.

In February, one of the larger importing Indian companies was in discussions with Russian banks about exchanging rupees for rubles to pay Belaruskali.

Belaruskali on its part was having discussions with Russian companies on the possibilities for exporting through Russian ports.

Presidents Putin and Lukashenko announced last year that the Russian port of Ust-Luga would be expanded and modernised to be able to take all of Belarus’ large potash exports. However, this notorious port building, which Putin and Lukashenko have spoken about throughout 2021, (and in 2022) hasn’t happened, and probably won’t happen for quite some time.

Right now, Russia needs all the money it can get for its war with Ukraine and even after the war there are many more immediate problems that it will likely prioritise before Lukashenko’s Belaruskali.

Already in February, an anonymous source told Bloomberg that before India’s biggest potash importer had signed a new deal it had asked for clarity on which shipping routes were going to be used by Belaruskali.

In addition to this, an analyst at Russian VTB Capital (VTBC) told Bloomberg: “Russian ports may handle the volumes instead of Lithuania, but given the sanctions risks, it is not yet clear if it will happen.”

As Belarus and India celebrated the former's’ 30-year anniversary in April, Belarusian state media mentioned increased future co-operation, but not a word about potash.

The Times of India reported on Thursday that due to nearly half of India’s potash needs being hit by the sanctions against Belarus and Russia, Indian importers have now struck deals with Canada, Israel and Jordan.

India needs 2,000 tonnes of Potash fertilisers for April-September. While India last year imported around 1,400 tonnes from Belarus alone, this year it has already secured 1,200 tonnes from Canadian, Israeli and Jordanian exporters. Prices have soared and more than doubled between November last year and March this year (from $280 per tonne to $590 per tonne).

According to Indian officials, the Indian government has begun to explore options to keep buying from new sources for the winter season in case the sanctions are prolonged.

Some people, especially Russian policy makers, seem to have thought that the sanctions would not be kept in place very long, but the sanctions against Belarus and Russia will most likely define the world economy for many years to come.

If countries like India and China can find other producers or different ways to avoid sanctions, then there’s no reason to ease up on sanctions for the West, since no food crisis is imminent.

The problem with this peculiar situation, especially for Belarus, is that although it has the products, there is simply no way for them to reach its markets. If the port in Ust-Luga expanded this year and Belarusian could again reach its former buyers, the risks are now that its previous buyers will already have switched to new suppliers, or decided to become largely self-sufficient on potash.

Moreover, the port and railway there would be a massive investment for both Russia and Belarus under the current sanctions conditions, and the increased transportation costs from Belarus to Ust-Luga compared to Klaipeda or Odesa will considerably lower profit margins.

Either way, Belarus seems to be losing out in both the short and the long term.