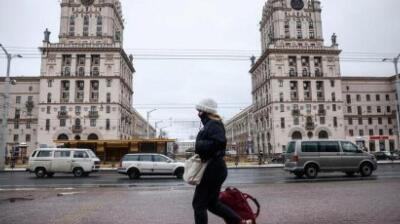 The mounting sanctions pressure on Belarus keeps hitting its financial sector hard, and Russia’s deteriorating financial situation isn’t making things any better. Nevertheless, Belarus has announced increased future military spending and the regime has stepped up repression within the country.

On February 27, Belarusians voted in a constitutional referendum, which the country’s opposition and western officials have called a sham, used by Belarus’ strongman Alexander Lukashenko to further consolidate his power. According to the adopted changes, Belarus does no longer have to be a neutral country. After March 15 Belarus’ updated constitution will take effect, and afterwards it could become host to Russian nuclear weapons, something which Lukashenko and Russian officials have threatened before.

According to US estimates, 70 out of 480 missiles fired at Ukraine in the first week of the war were fired from Belarus. Lukashenko has along with Belarusian officials claimed that the country is not participating in Russia’s invasion of Ukraine. The rest of the world thinks otherwise, and hard sanctions have been imposed on Belarus for its participation in the attack.

Perhaps Lukashenko believes that Moscow will leave the requested missile systems in Minsk for an indefinite amount of time, even though Minsk certainly isn’t in danger of being attacked any time soon. Either that, or he plans to acquire a loan – but neither Russia nor Belarus can afford to take any financial adventures at the moment.

The EU has recently announced the suspension of its cross-border and transnational co-operation with both Belarus and Russia. Among other things, this means no further payments to its current programmes in Belarus totalling €257mn.

Furthermore, the World Bank and the EBRD are leaving Belarus, and the country’s domestic banking system is crumbling quickly, with many banks unable to meet their customers’ increased demand for foreign currency.

Even China’s Asian Infrastructure Invest Bank (AIIB) has put all of its activities in Belarus “on hold” due to the war in Ukraine. In a statement, the AIIB said that it would do its utmost to “safeguard the financial integrity, against the backdrop of the evolving economic and financial situation.” The bank is likely to be worried now, considering Belarus’ increasing risk of defaulting on its loans.

On Friday 4, Standard & Poor chose to downgrade Belarus’ long-term foreign and local currency sovereign credit ratings from “B” to “CCC” and placed it on a credit watch. S&P expects the sanctions to get tighter, and therefore considers it likely that Belarus will default over the next 12 months.

With both its north-western and southern transport routes close off due to sanctions from Lithuania and war in Ukraine, one of Belarus’ largest potash producers JSC Grodno-Azot is considering halting its production. Since potash is such an important foreign currency earner for the regime, this will markedly reduce the state’s ability to pay off foreign currency-denominated loans this year.

Vladimir Putin last week supported the development of Russian ports in the Baltic Sea by the Belarusian regime for the purpose of potash exports. According to Putin: "They are important not only for Belarus, but also for us. Because it is the development of our infrastructure, the development on our shores, the increase in freight traffic for our country. Accordingly, all the benefits that Belarus will get will also extend to the economy of Russia."

Minsk and Moscow have been discussing these port developments for over a year now, but little has been done. Political and economic analysts have long doubted its feasibility, since the reconstruction of the ports, increased transport distance and acquisition of new train wagons will become too expensive for the Belarusian regime to finance.

Belarus’ is the third-largest potash exporter in the world and potash market analysts have long warned that shutting it out of the market could lead to a world-wide crisis in potash fertilisers. Last year, increasing potash prices nevertheless benefited the Belarusian regime. While sanctions more than halved its world exports of potash measured in tonnes, it could still take part on the world market.

On March 2, the EU ratified a new sanctions package against Belarus’ potash industry, which effectively banned around 70% of the EU’s potash imports from Belarus. In the new sanctions package, supply contracts agreed before the latest sanctions are included and not just new contracts – as has been the case in previous measures.

Now, the global effects from Belarus’ forced market exit are beginning to be felt as one of Belarus’ largest export destinations, Brazil, has declared fertilisers a matter of national security.

Brazil imports about 20% of its fertilisers from Belarus, imports which have now been forced to be cancelled due to Lithuania halting the transit of Belarusian fertilisers through its port of Klaipeda. What’s interesting is that Brazil is now looking into developing its own production and to exploit the largest potash mine in Latin America.

This means that even if Belarus finds a new way of exporting its potash, it might permanently lose one of its largest markets in the long run.

Belarus is also China’s third-largest supplier of potash fertilisers. China’s domestic availability of potash is tight and prices for Russian potash have allegedly spiked due to supply concerns about the ongoing conflict.

Concerns are mounting among Chinese importers as to how payments for Russian potash will be affected by western banking sanctions. However, this Belarus-China export route will probably survive, the only thing being needed is for payments to be conducted through unsanctioned banks, or bilaterally with the Belarusian regime.

Russia denies defaulting on $100mn bond coupon payment
4 hours ago
A maze of smuggler tunnels: the Kyrgyzstan-Uzbekistan border
4 hours ago
Ukraine's Zelenskiy calls on the US to recognise Russia as a state sponsor of terrorism
5 hours ago
Amnesty International issues damning report on Lithuania’s migration centres
5 hours ago
At least a dozen killed in shopping mall bombing as Zelenskiy urges G7 leaders to impose more sanctions
5 hours ago