One of the main surprises in global financial markets this year was the rebound in emerging market (EM) equities. From February lows to the end of the first half of 2014, the MSCI emerging market index surged 15% - despite the "tapering" by the Federal Reserve of its bond-buying programme, uncertainty over China's growth and lingering geopolitical risks. Yet, caution prevails. Many EM watchers see the first-half rally as a flash in the pan, mostly triggered by lower-than-expected US interest rates. As soon as the latter start firming, according to this view, the dollar will also strengthen, ending the rally of EM equities and reversing their second-quarter outperformance vis-à-vis developed markets (DM).

Of course, we all know that a similar story of rising yields and a strengthening US currency was already told six months ago as warning against adding EM exposure. However, it has not materialized. In fact, the decline in US treasury yields from 3% (10-year) at the start of the year to below 2.5% in May was one of the biggest surprises in recent financial history. That said, things have changed in the meantime. The US recovery, which was held back by a particularly harsh winter, seems back on track and inflation, for the first time in years, is gaining momentum. While views on when the Fed will start raising its policy rate diverge, the expected date of it to happen has moved forward in recent weeks, with a hike in the second quarter of 2015 evolving as the base case (see eg. Tim Duy). Some researchers even suggest a hike as early as the first quarter of next year.

Everybody still remembers last May and June, when the Fed’s announcement of its tapering plans fuelled market volatility and triggered a massive sell-off of EM assets. So, should EM investors again be afraid? Not necessarily, based on the longer-term empirical pattern. Charting the quarterly performance of the MSCI emerging markets index versus changes in US treasury yields (2-year) since 1990 – altogether 97 observations – results in a contourless data cloud that does not point to any obvious relation between the two time series. 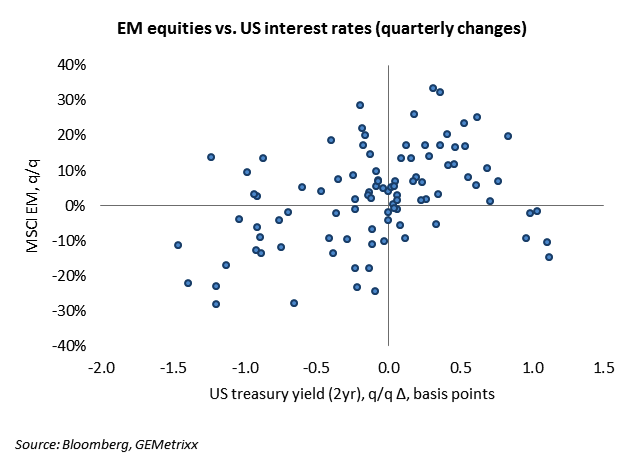 However, a closer examination of the data reveals some regularities. Since 1990, US interest rates posted 44 quarterly increases. Out of those, 34 quarters (75% of all observations) came together with rising stock prices in emerging markets. Only in 11 quarters when US yields went up, EM stock prices fell. On average, the MSCI EM index posted a gain of 8.1% during quarters with rising yields. In contrast, in quarters when US rates declined EM equities also lost in 28 cases, while posting gains only in 25 quarters. On average, EM equities lost 2.3% in quarters when US rates softened. Basically, these results also hold when we look at relative instead of absolute performance (as can be seen in the lower part of the table below): Typically, EM have outperformed developed markets when interest rates were rising - on average by about 4% per quarter - and underperformed during times of falling rates by slightly more than 2%. (For the sake of completeness: replicating the analysis with monthly or semi-annual data and using 10-year instead of 2-year yields does not alter the results in any significant way). 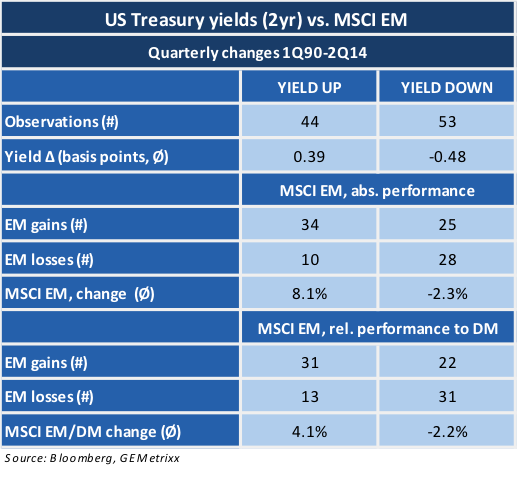 The available empirical evidence above does not suggest that rising US interest rates inevitably depress the performance of EM equities. Rather the contrary: Certainly market interest rates but to some degree also policy rates are endogenous to the economy. Their rise, in most cases, is a sign of health, reflecting that nominal and/or real growth is picking up. Particularly in the current situation, with interest rates at historical lows and economists debating the risks of a secular stagnation, any signals that the economy is strengthening will likely be supportive for EM, which are high-beta plays on global growth.

The prospect of higher interest rates should not derail the EM rally, as long as the US and Chinese economic news flow remains positive and European data stop disappointing. Moreover, the valuation gap between DM and EM still leaves room for further gains. DM equities are trading on 16-times forward earnings, EM equities on less than 12-times, implying a discount of close to 30% - well above historical levels. 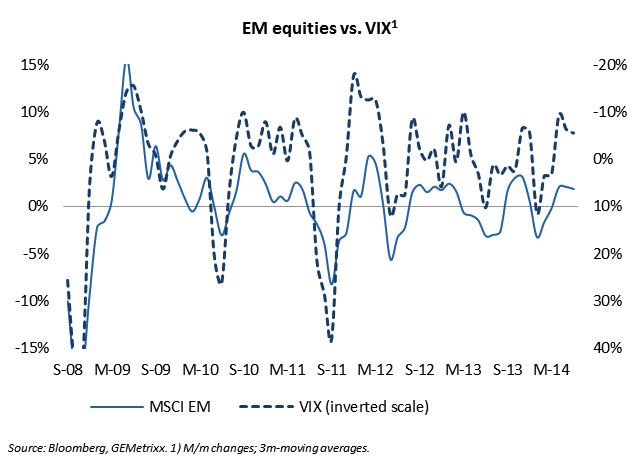 However, it will be important that - in contrast to last year - the trajectory towards higher rates will not go together with rising volatility. EM equities regularly perform when interest rates are rising and even in periods of a strengthening dollar, but rising volatility and a related increase in investors’ risk aversion is probably the most important negative impact on the performance of EM assets. With the VIX trading at seven-year lows, it is difficult to imagine any further support from this side.