Central and Eastern Europe and the Commonwealth of Independent States’ (CEE/CIS) countries performed particularly well in the World Bank's "Doing Business 2016" survey, with nearly all countries within the region enjoying an increase in their ranking.

As the first bne:Chart shows, when indexed against 2010 scores, CEE/CIS countries have far outperformed the EU in terms of improvements in the distance to frontier (DTF) value from 0 to 100. Germany, on the other hand, actually got worse.

CEE/CIS nations made up only 16% of the total number of countries studied, yet accounted for seven – or 29% – of the 24 countries that improved in three or more areas in this year’s report.

Russia just missed out on entering the world's top 50 economies in the World Bank's "Doing Business 2016" survey, ranking 51st out of 189 countries. While President Vladimir Putin had targeted 50th slot this year (taken instead by Peru), the position still marks an improvement on last year's assessment, which put Russia in 62nd place.

In 2012, Putin promised that Russia would reach 20th in the World Bank's report by 2018. While this year's place is still some distance away, it is a vast improvement on previous years. In 2011 Russia sat all the way down in 120th place.

The strides being made are a vindication of Putin's efforts, and the breakdown by the World Bank of the reforms made by Moscow show that real efforts are being made to improve the business climate in the CEE/CIS’s biggest economy.

Russia this year improved in five key areas: starting a business; getting electricity; registering property; and getting credit and paying taxes. These improvements, the report says, "were most successful in regions with greater government transparency" and "greater fiscal autonomy".

Kazakhstan also impressed in this year's report, climbing 12 places to 41st. Along with Russia, it was one of only 12 economies to implement four or more reforms since the last "Doing Business" report, at seven and five reforms, respectively.

Meanwhile, Ukraine jumped 13 places to 83rd slot, fulfilling President Petro Poroshenko's earlier pledge of a rise of "at least 10 places" in the ranking as a result of reforms carried out under his watch. 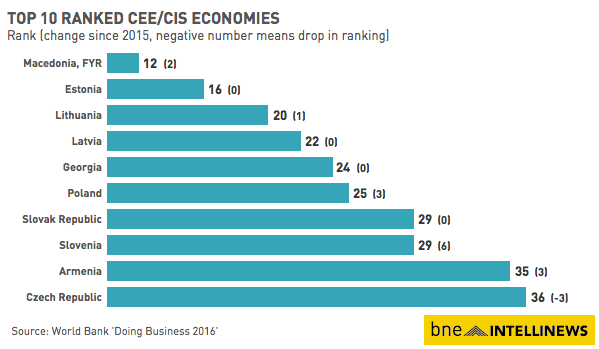