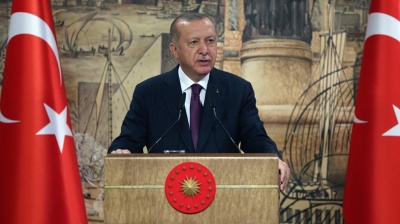 Erdogan announces the gas find at a press conference held in an Ottoman palace in Istanbul. / Presidency of Turkey.
By bne IntelIiNews August 21, 2020

No one can accuse Turkish President Recep Tayyip Erdogan of underselling Turkey’s gas find in the Black Sea.

The wily monocrat built up expectations and suspense by two days ago promising that he would today (August 21) announce some “good news” that would change the country’s destiny. Of course, as wags were quick to point out on social media, the subtext to all this is that the Turkish lira, and by extension Turkey’s economy, are in deep crap on the markets and Erdogan’s lickspittle officials are now working overtime to deliver some good news every week to distract the naysayers and avoid an irreversible slide into the mire. Erdogan, they implied, had also discovered new reserves of hot air.

But the master rhetorician worked the gas discovery hard. Though the size of the identified reserves—320bn cubic metres (11.3 trillion cubic feet), relatively small compared with other major gas fields—turned out to be somewhat more modest than expected from briefings given by supposedly informed sources to news agencies the day before, the executive president was able to declare in a televised address from an Ottoman palace in Istanbul that “Turkey has realised the biggest natural gas find of its history in the Black Sea” and rejoice: "My Lord has opened the door to unprecedented wealth for us."

From the immediate reaction of the markets it appeared that Erdogan had overplayed his hand—the Borsa Istanbul BIST-100 index fell as much as 1.8% and ended August 21 1.5% down, while shares in Turkish energy companies including refiner Tupras, Aksa Enerji and Aygaz retreated sharply after the news and the lira was trading 0.5% lower at 7.33 per dollar by the end of the day—though he must be given some benefit of the doubt for, who knows, if fortune gives the widest of grins to Turkey’s gas explorers in the years ahead, some of his further lashings of rhetoric—“This reserve is actually part of a much bigger source. God willing, much more will come. There will be no stopping until we become a net exporter in energy,” Erdogan also told assembled media—could come true.

As for the discovery as it stands, Jonathan Lamb, a senior oil and gas analyst at investment bank Wood & Company, was not talking of a game-changer, instead telling Bloomberg: “The question now is how much of this gas is recoverable. This is not clear yet. What the market really wants to know also is how much they can produce per year, but I don’t think they are in the position to say that yet.”

Turkey, almost entirely reliant on imports from countries including Russia, Azerbaijan, Iran and Iraq to meet its energy needs, had an energy import bill of $41bn last year. Bigging up the impact the gas resource could have on the country’s economy, Erdogan’s son-in-law finance minister, speaking by video link from the deck of the Fatih drill ship instrumental in identifying the Black Sea gas, said: “We will remove the current account deficit from the agenda of our country.”

Such a stunning prospect would of course be a life-saver for the lira—Turkey market watchers said this week’s impact of the headline gas story may have saved the lira, which hit a record low of 7.40 earlier in the week, from plunging beyond 7.50—but Jason Tuvey at Capital Economics offered a rather more sober outlook in a note to investors, saying: “Turkey’s discovery of gas in the Black Sea will provide some boost to the country’s external position, but it might be quickly eroded.

“President Erdogan unveiled the discovery on Friday of a field containing 320bn m3 of gas. While this is pretty small compared with other major gas fields globally, the deposit will help to cut Turkey’s energy import bill, which amounted to 2% of GDP last year. That said, there are reasons to be cautious. For one thing, it will take time for the necessary infrastructure to be put in place before the gas can be extracted—Mr. Erdogan said that the aim is for gas to be ready for use by 2023. Even then, the boost to Turkey’s external position may only be temporary.

“There is a risk that the authorities respond to the improvement in the balance of payments position by loosening policy. The resulting pick-up in domestic demand would leak into imports and cause an offsetting deterioration in the current account position.”

Reuters reported many officials and analysts as cautioning that it could take up to a decade for gas from the Black Sea find to come online, while it would need billions of dollars of investment to build up the infrastructure for production and supply, but it also cited Sohbet Karbuz, director of hydrocarbons at the Paris-based Mediterranean Observatory for Energy, as observing that Turkey may move ahead swiftly with investment decisions.

“The process will move very quickly, in terms of financing, time and procedures. Help will probably be needed from foreign companies from a technical and technological perspective but I see 2023 as a reasonable target [for extraction],” Karbuz said.

The gas discovery is located in waters 2,100 metres deep in the Tuna-1 zone, 150 kilometres (93.2 miles) from Turkey’s coast. Turkish Energy Minister Fatih Donmez said drilling extended another 1,400 metres below the sea bed, adding: “We will go down a further 1,000 metres ... and data shows we will probably reach gas there too.”

The find is close to an area where maritime borders of Bulgaria and Romania converge and not far from Romania’s Neptun block. That, until now, was the largest gas find in the Black Sea in decades. It was discovered eight years ago by Petrom and Exxon. Romania so far only has shallow-water gas projects, with the deep-water find yet to be exploited. A company backed by The Carlyle Group is also exploring off Romania, with the objective of bringing up gas in 2021. Rosneft has explored in the Russian part of the Black Sea but without concrete results.

The Black Sea reserve is unlikely to sate the appetite of Erdogan for hydrocarbons. Turkey remains in dispute with Greece and Cyprus over the borders running through the eastern Mediterranean as it searches for oil and gas in contested waters. A similar row with Egypt is rumbling. Crete, meanwhile, has complained that the Erdogan palace refuses to recognise its existence on the map where potential gas and oil deposits are concerned.

Erdogan said he also expected “good news” from exploration activities in the eastern Mediterranean. If that particular good news turns out to be particularly “good”, the oil and gas execs might have to factor in the arrival of more French warships. Standing shoulder to shoulder with Greece, French President Emmanuel Macron has lately become deeply unimpressed by the activities of Turkey’s survey vessels and drill ships, invariably out at sea with a naval escort.

ISTANBUL BLOG: With official inflation a hair’s breadth from 70%, Turkey is on the tail of Zimbabwe