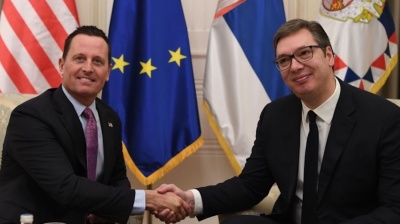 The US is back in the game in the Western Balkans, as President Donald Trump’s new envoy for the Serbia-Kosovo dialogue has brokered a deal on the resumption of air traffic between the two countries’ capitals, and says he is moving closer to a second deal on rail transport.

The news comes after a couple of years during which relations had been steadily deteriorating, and just months after the appointment of Richard Grennel, the controversial US ambassador to Germany, as the special envoy for the region.

Both Grenell and US President Donald Trump's national security adviser, Robert O'Brien, contributed to the signing of the letter of intent (LoI) between German airline Lufthansa and Kosovo's Civil Aviation Authority on the resumption of flights from Pristina to Belgrade, as announced by Kosovo’s President Hashim Thaci on January 20. The LoI with Lufthansa was also signed with the Serbian authorities.

The agreement envisages the relaunch of direct flights between Belgrade and Pristina after being halted two decades ago during the Kosovan war of independence.

Trump welcomed the news on his Twitter feed, writing: “Everyone said it couldn’t be done. But for the first time in a generation, there will be direct flights between Serbia and Kosovo. Another win. Thanks to @WHNSC Ambassador Robert O’Brien and Ambassador @RichardGrenell!"

Grenell — a highly enthusiastic Trumpian — threw the credit back onto the US president, writing: “President @realdonaldtrump once again led us to an historic victory. Kosovo and Serbia today signed an agreement to create the first direct flight between Pristina & Belgrade in 21 years. Thank you @lufthansa, @NATO, @robertcobrien and the leaders of Kosovo and Serbia.”

The air transport agreement was followed swiftly by a statement from Grenell that the reopening of rail services could be imminent.

On January 25, the US envoy indicated in Belgrade that he had managed to persuade the parties to reach an agreement in principle on reopening a rail link.

"Come sit down and make arrangements for the railways," Grenell said.

“I am very grateful to Richard Grenell for understanding the needs of Serbia with a rational approach and a strong desire to move forward. We had a good, open and honest conversation,” Serbian President Aleksandar Vucic said in a tweet.

The discussion of a rail service between the long-divided cities is all the more remarkable looking at the last time Serbia planned to send a train into Kosovo, in 2017, when it sparked a diplomatic row between the two countries, as the Russian-made train in question was painted with the sentence “Kosovo is Serbian” in over 20 languages.

The train was supposed to run from the Serbian capital to Mitrovica in northern Kosovo, along a line that had been closed since the NATO bombing in 1999. However, it was sent back on Vucic’s orders, following threats from the Kosovan authorities to arrest the driver and passengers.

Relations worsened further in the last year and a half, with Serbia calling off the EU-brokered talks on normalisation of relations between Belgrade and Pristina altogether after the Kosovan government announced 100% import tariffs on goods from both Serbia and Bosnia & Herzegovina (which, like Serbia, does not recognise Kosovo as an independent state) in November 2018.

Serbia is losing €1.39mn per day from the import tariffs imposed by Kosovo, Trade, Tourism and Telecommunications Minister Rasim Ljajic said on January 20, with the highest losses seen in the food processing sector. In total, Serbia’s exports of goods have decreased by €435mn since the tariffs were imposed.

Pristina has so far resisted calls from its international partners to lift the tariffs, pointing to Serbian actions such as the “de-recognition” campaign. Belgrade — supported by Russia — has successfully blocked Kosovo’s entry into international organisations such as Interpol and has been pursuing a de-recognition campaign that has seen several countries, mainly from Africa and Asia-Pacific, withdraw their recognition of Kosovo. The Serbian foreign ministry announced in November 2019 that a total of 17 countries had made such a decision.

The breakthroughs on air and rail transport were hailed in Washington, not least because they contrast with the stalled progress in the EU-mediated talks between Belgrade and Pristina.

A few months ago it looked like the Trump administration had little interest in Balkan affairs, but with the appointment of Grenell, the process has been reinvigorated and US influence has revived.

In normal times, Grenell would have been an unusual choice of ambassador for one of the most important diplomatic posts in the world. A former right-wing talking head, best known for his aggressive social media style that led some to label him simply an internet troll, he won the favour of the similarly minded US president. Grenell’s Twitter feed is full of laudatory comments about his president, and the sentiment seems to be reciprocated. Grenell also the highest ranking openly gay official in Trump’s administration.

As ambassador to Germany, Grennel has been highly controversial due to his open criticism of the German government, especially over Berlin’s failure to spend the NATO-mandated 2% of GDP on defence, Chancellor Angela Merkel’s migration policy and Germany’s involvement in the Nord Stream pipeline with Russia.

Such sentiments went down so badly in Berlin that Wolfgang Kubicki, the deputy chairman of the opposition Free Democrats (FDP), called on Foreign Minister Heiko Maas to declare him persona non grata. Indeed, his comment that “I absolutely want to empower other conservatives throughout Europe” was seen as a call for regime change in his host country.

By contrast, this approach went down so well in the White House that Grenell has been mentioned as a potential candidate to become the next Secretary of State should the current holder of the position, Mike Pompeo, decide to run for the Senate.

The US breakthrough highlights the contrasting stagnation of the EU-mediated process in the region, as Brussels has seen its stock fall across the region amid the slowdown of the enlargement process.

Previously, there had been slow but visible progress in improving relations between Belgrade and Pristina following the signing of the landmark Brussels Agreement back in 2014. Now, however, there is scepticism in all the Western Balkan capitals about their prospects of eventual EU membership, previously seen as the single most important incentive for reform across the post-socialist region.

French President Emmanuel Macron’s decision to veto the start of accession talks with Albania and North Macedonia in October, and call for a rethink of the enlargement process, had repercussions beyond the two countries immediately affected. While top EU officials and politicians including Merkel have been seeking to resolve the issue and revive the process, it remains unclear how long it will take the candidate countries to achieve membership. A tentative date of 2025 was put forward for Serbia and Montenegro, but this is looking increasingly far off.

Kosovo is the furthest of the Western Balkan states from achieving EU membership, as it is not recognised as an independent state by five current EU members. They include Spain, the home country of the new EU High Representative for Foreign Affairs Josep Borrell, whose predecessor in the last European Commission, Federica Mogherini, was one of the key actors in the talks between Belgrade and Pristina.

Long on bombast, short on detail

But despite the notable achievement not just in bringing the two sides to resume negotiations, but in actually reaching one agreement and closing in on a second, there remain unanswered questions about the practicalities of resuming air and rail transport between the two countries.

The Kosovo Democratic Institute, the local division of watchdog Transparency International, questions which Kosovan documents will be accepted by the authorities at Belgrade’s Nikola Tesla Airport, and what the approach will be toward travellers holding other passports: “Will they be able to enter Serbia at the Belgrade airport if they first entered Kosovo via a border not recognised by Belgrade? In other words, will the flight be classified in Serbia as a domestic or an international service?” the NDI asks on its Facebook page.

Currently flights to and from Kosovo are barred from Serbian airspace, forcing operators to fly across North Macedonia, which increases flight times by 15-20 minutes.

More importantly, the Serbian government has said that in order for flights between Belgrade and Pristina to be restored, Kosovo’s government should abolish the 100% tariffs imposed on Serbian products — precisely the issue that has been holding back the normalisation talks for more than a year.