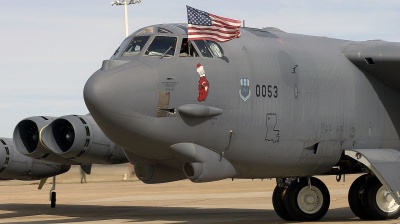 A bomber task force made up of four B-52 aircraft now sits at an air base in Qatar across the Persian Gulf from Iran.
By bne IntelliNews May 10, 2019

Iran’s Islamic Revolutionary Guard Corps (IRGC) on May 10 knocked back the suggestion from Donald Trump that the country’s leadership should sit down and talk with him over the growing crisis between the US and Islamic Republic.

“No talks will be held with the Americans and the Americans will not dare take military action against us,” Yadollah Javani, the IRGC deputy head for political affairs, was quoted as saying by Tasnim News Agency. “Our nation... sees America as unreliable.”

As the day also brought news of the arrival of American B-52 bombers at a US base in Qatar over what Washington describes as threats—the intelligence is widely reported to have come from the Israelis but what has been publicly detailed is vague and in no way independently verified—and the aircraft carrier USS Abraham Lincoln passed through the Suez Canal, analysts continued to assess the likelihood that neocon hawks in the Trump administration are bent on a military confrontation to secure regime change in Tehran.

War of attrition
The unprecedented war of attrition on Iran’s economy is continuing apace—May brought in the policy of attempting to force Iranian oil exports towards zero and this week the US also sanctioned Iran’s sizeable exports of metals—and Trump, while suggesting talks, said he could not rule out military action.

Iran describes the US military build-up on its doorstep as “psychological warfare” and says the deployment of the aircraft carrier was a routine matter ordered long ago that has been dressed up as a “response”, but the threatening military presence is nevertheless real and Trump was, on May 9, asked by reporters whether there is real potential for a military clash.

“I guess you could say that always, right? I don’t want to say no, but hopefully that won’t happen. We have one of the most powerful ships in the world that is loaded up and we don’t want to do anything,” he responded.

The B52s and USS Abraham Lincoln operate under US Central Command (CENTCOM) that covers the Middle East and Afghanistan. In April, Iran designated CENTCOM as “terrorist” after the unprecedented announcement from the White House that the US had placed the IRGC on its list of foreign terrorist organisations.

Thousands join marches
Thousands of Iranians took part in state-sponsored marches on May 10 to voice support for the government’s move on May 8 in which it gave the remaining nuclear deal signatories (most pointedly Europe) 60 days to do significantly more to protect Iran’s oil and banking industries from US sanctions under the nuclear deal—or face the scenario of Iran scaling down its commitment to the accord, and most probably at least gradually moving for the exit.

State television showed thousands marching after Friday prayers in Tehran and reported that similar marches were held across the country. “America should know, sanctions have no effect!” chanted the demonstrators, many of whom carried signs reading “Down with USA”.

The US contends that Iran is a “malign” player and “rogue nation” that is a threat to Israel and peace in the Middle East given its nuclear programme, growing capabilities in anti-ballistic missiles and support for various militant groups across the region. But Iranian officials continue to push the case that the Trump administration has turned the US into a “rogue nation” that is attempting to manufacture and inflame a crisis, with John Bolton, the president’s national security advisor, who was an architect of the 2003 Iraq invasion, manipulating intelligence and tensions.

Trump, for instance, is demanding that Iran gives up its nuclear programme but the 2015 nuclear deal brought in measures that bar any potential path Tehran could take to developing a nuclear weapon—while permitting some activities enabling a civilian nuclear energy industry—and apart from the US, all the accord signatories, namely France, Germany, the UK, China and Russia, as well as UN nuclear inspectors, are satisfied that Iran remains in full compliance with the agreement.

He dismissed US allegations of an Iranian threat first promulgated by Bolton as “fake intelligence” and said that they were “being produced by the same people who in the run-up to the US invasion of Iraq did the same”.

As things stand, the US has Iran in a tightening noose. It is quite plainly under siege. The Europeans have delivered little in coming to Iran’s aid beyond symbolic support for retaining the nuclear deal. Fine words, little action.

European energy companies, banks and other businesses have fled Iran in the face of threats from Washington that staying put would trigger secondary sanctions and the door closing on any prospect they would have of continued, or new, business in the world’s largest economy. They have taken their pick and Iran, now trapped in a biting recession growing worse by the day, cannot realistically expect any commercial salvation.

“The Europeans thought they would appease Trump and ease the ‘maximum pressure’ policy on Iran. Clearly that is not working out,” Dina Esfandiary, an Iran expert at the Belfer Centre for Science and International Affairs at Harvard University, was cited as saying by the Guardian.

As for the prospects of an anti-war movement in the US managing to put a brake on the hawks in the White House, that has to be in severe doubt. There have been 40 years of enmity between Washington and Tehran since the 1979 US embassy hostage crisis and one recent poll showed that some 71% of Americans perceive Iran as “mostly an enemy” of their country.