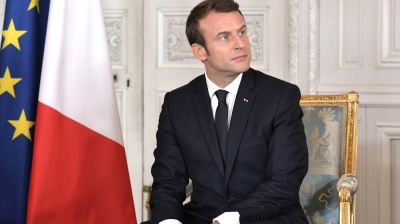 Macron and Merkel both urged calm.
By bne IntelliNews May 9, 2019

French President Emmanuel Macron and German Chancellor Angela Merkel on May 9 urged calm to prevent any escalation in the dispute over the Iran nuclear deal in response to Tehran the previous day threatening that in 60 days it would resume the enrichment of uranium beyond the purity needed for civilian nuclear power generation unless the remaining accord signatories found a way to protect Iran’s lifeline oil exports and banking industries from US sanctions.

As has become familiar in relation to almost anything to do with Iran, the US jumped on the development to talk up tension, while the European powers tried to tamp things down. US envoy for Iran, Brian Hook, accused Tehran of resorting to "nuclear blackmail".

Macron spoke in Romania ahead of an EU summit. He told reporters that "Iran must remain in this [nuclear] agreement, and we must do everything we can to ensure that it stays in". He called on the agreement's signatories not to "get caught up in any escalation" and to "jointly watch over our collective security".

Merkel said Tehran must acknowledge that its own interests are served by remaining a signatory of the nuclear deal, formally the Joint Comprehensive Plan of Action (JCPOA). "Our hand remains outstretched at this point; we want to continue to push for a diplomatic solution," Merkel said after the EU meeting.

There have been recent fears that hawks in his administration are pushing for a military showdown with Iran, but Trump added that his administration was not looking for a conflict with Tehran. "I want them to be strong and great, to have a great economy," Trump said, adding that "we can make a fair deal."

The nuclear deal was signed by Iran, the US, UK, France, Germany, China and Russia. Since January 2016 it has shielded the Iranians from international sanctions in return for measures designed to bar any potential path Tehran might take to develop a nuclear weapon. But, after unilaterally pulling the US out of the multilateral deal in May last year, Trump has imposed US sanctions, which are the most economically damaging sanctions that Iran, now in a biting recession which is deepening by the day, has ever experienced. Trump claims the nuclear deal is too weak as it does not address other issues such as Iran’s ballistic missile programme and support for certain militant groups in conflict zones in the Middle East. He intends to strangle Iran’s economy to the point where the Iranians make concessions on such matters. The strategy has the full backing of Israel and Saudi Arabia.

Macron said the JCPOA is "a good agreement" but added that it should be complemented with other pacts that would get a grip on Iran's missile development and potentially destabilising role in the Middle East.

The EU's foreign policy chief, Federica Mogherini, and the foreign ministers of Britain, France and Germany said in a joint statement that they still backed the accord but rejected "ultimatums" from Tehran to keep it intact.

The EU powers said they "regret the reimposition of sanctions" by the US. They added that they remain "determined to continue pursuing efforts to enable the continuation of legitimate trade with Iran". It’s partly the stark lack of progress by Europe in this area in the past year that has led to the ultimatum from Iran. Matters have come to a head with the US announcing in late April that it will attempt to use sanctions to drive all Iranian oil shipments out of the world crude export market. On May 8, the Trump administration introduced sanctions on metals exports which it says make up 10% of Iran’s export economy.