TEHRAN BLOG: “Dangerous and disingenuous”—Is Trump building a case for war with Iran? 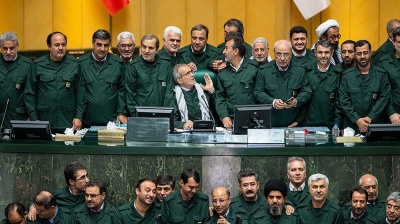 Iranian MPs wore IRGC uniforms to parliament in a show of support for the Guard after it was designated "terrorist" by the US.
By bne IntelliNews April 15, 2019

A former top US State Department official is among experts concerned that the Trump administration’s unprecedented designation of Iran’s elite Islamic Revolutionary Guard Corps as a foreign terrorist organisation (FTO)—which takes effect on April 15—is part of a plan to lay the groundwork for strikes on Iranian forces, especially in Iraq or Syria where Iranian forces might encounter US troops.

“One of the reasons why this action occurred could be because there’s an actual interest to do things directly against the IRGC,” Jason Blazakis, who served as the director of the State Department’s Counterterrorism Finance and Designations Office from 2008 to 2018, was quoted as saying by ABC News on April 14.

While the designation doesn’t provide legal authority itself, it could be part of the administration’s argument, Blazakis added.

Critics are concerned that the uber-hawkish White House may be planning to stretch or bend the law to the limit to claim US legal authority for strikes on Iranian forces.

“I am troubled that the administration can’t unequivocally say that you haven’t been given power. I can tell you explicitly, you have not been given power or authority by Congress to have war with Iran,” Republican Senator Rand Paul, told US Secretary of State Pompeo on April 10.

In response, Pompeo refused to rule out whether the US Authorization for the Use of Military Force (AUMF) authorised military action against Iran or the IRGC, telling Paul: “I’d prefer just leave that to the lawyers.”

“Priming the public”
Tess Bridgeman, who served as deputy legal adviser to President Barack Obama’s National Security Council, told CBS: "The Trump administration seems to be priming the public for an argument that the 2001 AUMF covers Iran."

The AUMF, passed by Congress on September 14, 2001, gives the executive branch broad authority to use force “against those nations, organizations, or persons” that it determines “planned, authorized, committed, or aided the terrorist attacks” on 9/11 “or harbored such organizations or persons.”

Majority-Shia Iran has always pointed out that al Qaeda is a Sunni Muslim terror group and that al Qaeda and some of its affiliates have even conducted numerous terror attacks on Iran, including a February attack in Iran’s southeast claimed by a Pakistan-based Sunni extremist group that killed at least 27 IRGC soldiers.

However, the Trump administration is busy attempting to draw a clear link between Iran and al Qaeda. In its announcement on the FTO designation, the State Department said one reason for the move was that “Iran continues to allow al Qaeda operatives to reside in Iran, where they have been able to move money and fighters to South Asia and Syria”.

Since 2012, the State Department’s country terrorism report has stated that Tehran has allowed al Qaeda “facilitators to operate a core facilitation pipeline” through Iran.

Pompeo also said last week that the US will pursue Major-General Qassem Soleimani (or Suleimani), leader of the IRGC Quds Force that conducts foreign operations, such as in Iraq and Syria, where it backs certain Shi’ite militias. He did not explain whether that meant a policy of capturing or targeting Soleimani, but he told Fox News: “He is a terrorist. … Soleimani has the blood of Americans on his hands, as does the force that he leads, and America is determined … to reduce the risk that any American will be killed by Qassem Soleimani and his merry band of brothers ever again.”

The FTO designation applied to the IRGC marks the first time the US has ever used the move against an entity of another country’s government. It is particularly notable because experts say that on face value it will add little to efforts made against the IRGC—the Guard, said to be behind businesses that account for a huge amount of Iranian GDP, is already under heavy State and Treasury Department sanctions, including as a Treasury special globally designated terrorist entity.

Thousands protest across Iran
The step has undoubtedly angered Iran’s leaders and on April 12 thousands of Iranians carrying signs reading “I’m a Guard too” and “Down with USA” marched to protest against the designation.

“Americans should know that this is a self-inflicted blow, meaning that they are jeopardizing the security of their own troops in CENTCOM and across the world,” General Kioumars Heydari, head of the regular army’s ground forces, was quoted as saying by the semi-official ISNA news agency, in a reference to how Tehran retaliated against Washington’s move by designating the regional United States Central Command (CENTCOM) that covers the Middle East as a terrorist organisation.

Foreign Minister Mohammad Javad Zarif, meanwhile, announced on April 14 that Tehran would ask the international community to take a position on the designation.

“Today ... we will send messages to foreign ministers of all countries to tell them it is necessary for them to express their stances, and to warn them that this unprecedented and dangerous U.S. measure has had and will have consequences,” Zarif was quoted as saying by state news agency IRNA.

Iran has to an extent relied on support from major European powers France, Britain and Germany to push back against the aggressive stance taken by the Trump administration to the Islamic Republic. The trio are against the sanctions approach at trying to force Iran to change its Middle East policies and last year set up a new mechanism for non-dollar trade with Iran to protect against the US measures.

But in his latest remarks, Zarif complained about the delay in the implementation of the mechanism. He urged Europe to make it operational as quickly as possible, saying: “The Europeans should not believe that the Islamic Republic of Iran will wait for long,” he said.