X5 bets on data and retail tech to stay ahead 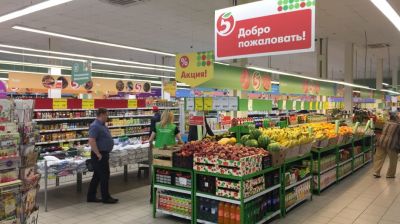 X5 Retail Group is turning to technology to stay in the lead in Russia's retail business / wiki
By bne IntelliNews November 25, 2019

X5 Retail Group is turning to technology in an effort to stay ahead of the disruption Russia’s food retail market is going face as the business goes digital. E-commerce is flourishing and increasingly eating into traditional retail and the industry is facing a do or die moment.

Relying on economies of scale to hone efficiency isn’t enough, X5’s Head of Strategy Vladimir Salakhutdinov, told bne IntelliNews in an exclusive interview. Russia’s largest retailer by revenue must maintain a relentless focus on innovation and adopting cutting-edge retail tech across every aspect of its business if it is going to remain Russia’s number one, Salakhutdinov says.

“Our goal is to make all of our decisions data-driven and to automate more of our processes,’’ said Salakhutdinov. “This approach can help us achieve greater efficiency in everything we do, from centralised monitoring electricity use at our stores to ensuring our produce shelves are properly stocked with fruits and vegetables or that queues at the checkout tills don’t get too long.’’

X5 uses data to pinpoint areas where the food retailer can become more efficient and sustainable. The company has already set up its own in-house tech team to develop bespoke solutions and it has a global startup scouting program to unearth new retail tech solutions to problems, which are then adapted to X5’s business by the in-house team.

One of the most recent examples was a combination of video monitoring and artificial intelligence to watch produce sections and automatically inform store staff if a certain product runs low, or if an employee needs to tidy up the section.

“We are testing this tech to see whether it can tell if cucumbers are about to run out, or if apples and oranges have been mixed together,” says Salakhutdinov who adds the technology should improve the in-store experience for the customer, while freeing up staff to take care of other tasks.

“We test innovations by piloting them in select stores and making the necessary adjustments before rolling them out across our entire network of over 15,700 stores,’’ Salakhutdinov said. “As a publicly traded company, it’s important for us to be cost-conscious. We adopt innovations and roll them out across our stores only when it makes sense from the financial perspective.’’

X5’s new self-checkout tills are another example of a recent innovation that have been introduced to the Pyaterochka supermarket stores across Moscow.

Self-checkout tills are already becoming common and used by many US and European retailers, but X5 has built its own version. Its own tech team created both the hardware and the software that runs tills to ensure they integrate with X5’s existing software while keeping production costs down.

“We are a big chain, so we developed our own tills because it’s cheaper. In fact, it’s several times cheaper, which enables us to scale the technology across our stores,” Salakhutdinov said.

Other innovations are more radical. The company is currently experimenting with a new store concept similar to the Amazon Go stores, which focus on faster service and greater convenience. X5 has built a 20 square meter prototype store that is almost 100% automated called “Pyaterochka S Soboy”, Russian for “Pyaterochka On the Go.” The concept store uses a combination of video technology, a mobile app and AI to minimise the staff needed to run the store to the absolute minimum.

Salakhutdinov says that X5’s goal is not to remove the human element from stores completely, but to free up staff time to focus on helping customers on the shop floor, which X5 believes is becoming increasingly important to Russian consumers.

Its an on going process and X5 has two “Lab Stores,” which operate on-site a Pyaterochka proximity store and Perekrestok supermarket where new ideas are constantly being tested. These on-site offices enable X5 to try out new tech solutions in a real store environment and see how consumers respond to innovations before they are rolled out across one of the world’s largest food retail networks.

“Innovation is about trial and error,’’ Salakhutdinov said. “We are continuously testing new things to make sure we are prepared for the future.”

Belarus’ turn to China
2 days ago
East and West clash in Bulgaria’s snap general election
2 days ago
Old faces set to keep ruling Bosnia post-election
3 days ago
Georgia’s border clogged with thousands of Russians fleeing the Kremlin’s mobilisation
3 days ago
Meloni won the elections, but her programme won’t make Italy the next Hungary
3 days ago