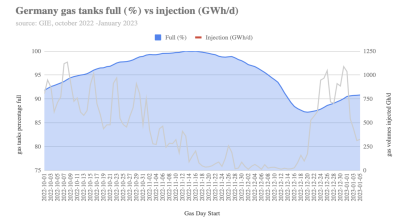 An unusually warm winter and record levels of LNG imports have allowed Germany to inject move gas into its storage, where the tanks are currently 90% full. / bne IntelliNews
By bne IntelliNews January 9, 2023

Record-high December and January temperatures have allowed Germany to inject more gas into its gas tanks to hit 90% full as of January 6, from 87% a few weeks ago, in an unprecedented result. (chart)

Europe has scrambled to buy LNG supplies mainly from the US and Qatar after it was plunged into an energy crisis in 2022 after Russia cut supplies of piped gas to next to nothing in the second half of the year.

Europe’s average gas tank storage was 83% as of January 6 and although Europe as a whole has continued to receive new and record level supplies of LNG, it had been withdrawing gas from storage since November. (chart)

After a brief cold snap in the first half of December where gas started to be withdrawn, a 25C increase in temperatures over the holiday period has destroyed demand and new record-high supplies have led to more gas being injected into the tanks than has been withdrawn and the overall level of gas in storage has remained flat at about 83%.

The combination of very full tanks and low demand for gas for heating has driven down the prices on the Dutch TTF hub, which have fallen below the levels they were at before the start of the war in Ukraine on February 24.

The front-month TTF contract closed at €55 per 1,000 cubic metres on January 4 – its lowest level since mid-February a year ago. Capital cities such as Berlin and Paris experienced temperatures of between 15-20 degrees Celsius in the first days of the new year – a time when they typically ensure temperatures closer to freezing.

The low prices and full tanks will significantly reduce the pressure on Europe in the 2023/24 winter season as Russian deliveries of gas are expected to halve this year, making it difficult to refill the tanks for the next heating season, which is due to begin in November.

The Kremlin needed a cold winter this year in the hope that Europe would burn through its reserves fast with few options to replenish them in 2023, thus perpetuating the energy crisis for another year. Instead, Europe will have to import significantly less gas than last year thanks to the warm winter, making supplying itself with LNG instead of Russian piped gas much easier.

There is still a chance that the temperatures will turn cold again, as the heating season typically continues until the end of March, but the mild Christmas and New Year’s holidays significantly increase Europe’s chances of avoiding a new and even worse energy crisis in 2023. 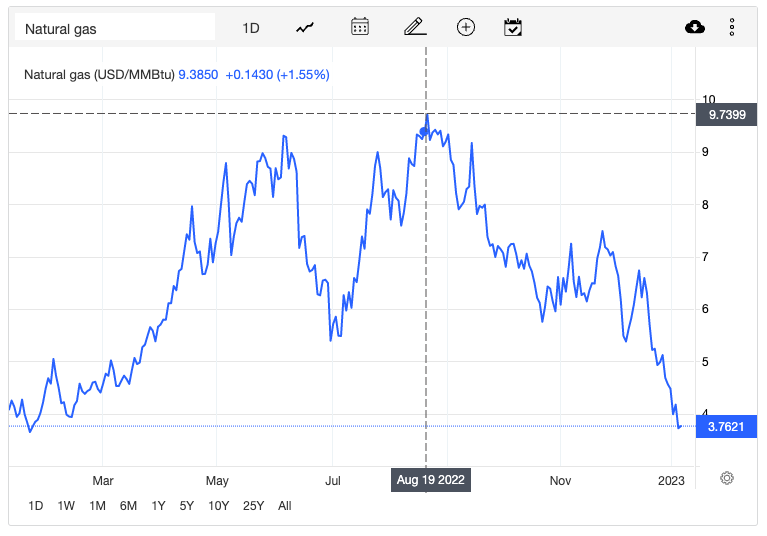 Russia’s industrial output resilient in 2022 on war spending
Russian budget deficit soars in January, full year deficit could double to over 6% of GDP
Jury still out on the effectiveness of the oil price cap scheme on Russian exports

Russia’s industrial output in 2022 declined by 0.6% year on year in 2022, according to the latest data from state statistics agency RosStat, thanks to heavy spending by the state to put Russia's economy onto a war footing.

The Russian budget started January in its deepest deficit in years, according to the result released by the Ministry of Finance on January 6.