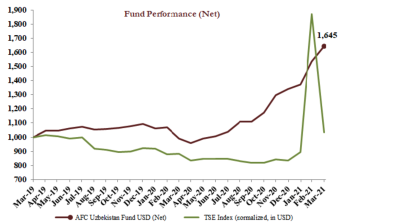 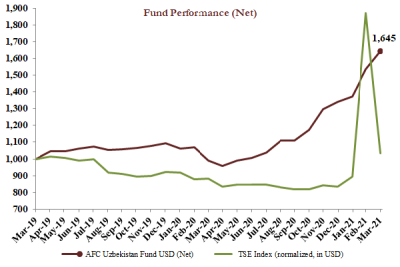 Tashkent’s Stock Exchange (TSE) had a rude introduction to the world of capitalism in January after shares in insurance company Universal Sugurta soared, taking the TSE index from around 900 to almost 1,900 points in a matter of a few weeks, only for the index to crash back to where it was by the start of March.

Controlled by Uzbek business man Anvar Irchaev, Universal Sugurta is part of the Orient Group, a diversified holding that also owns, amongst other things, a majority stake in Universal Bank and an asset management firm also under the “Universal” umbrella.

No one is quite sure what happened, but it looks like the local stock market has been introduced to the world of the fictional Wall Street investor Gordon Gekko, who made his money manipulating stock prices and from insider deals. Universal Sugurta's stock price boom seems to have been the victim of a classic “pump and dump” play.

Turnover on the TSE is tiny. Despite reforms that now make it possible for foreign investors to buy shares and, crucially, repatriate their profits to their home country without restriction, few international investors are in the market.

That is important, as in other frontier markets like Vietnam there are some international players that largely track the index and a favoured scam is to pump up a stock to the point where it has to be included in the index because that forces the international index trackers to buy the shares and sucks in investment, at which point those that have been doing the pumping start the dumping.

However, Uzbekistan’s stock market is so underdeveloped that it doesn't have any index trackers yet, so there doesn't seem to be any point to pumping a stock and there is little money available to attract.

Nevertheless, starting at the end of December someone began buying large blocks of shares, pushing the share price up close to the 20% gain-a-day limit, after which the market rules trading is stopped to prevent market volatility. This went on for several weeks, until the unknown traders stopped buying and the share price rapidly collapsed again in February.

At the start of December the stock was trading at UZS0.01 and the stocks had literally zero daily turnover. Then on Christmas Eve someone began buying in ever increasing blocks until the share price peaked on February 26 at UZS20 – a whopping 2,000-fold increase in just two months.

The trade volumes fell off after the peak and the share price quickly dropped by half. However, there is still some trading in the stock now, albeit at much reduced volumes, and the share price as of the start of April was UZS3.89 – still up 389-fold from its December start. The collapse of the Universal Sugurta share price dragged the TSE Composite index down with it by 45% from 1,442 to 793 in March.

Market participants interviewed by bne IntelliNews were perplexed, as they couldn't see how a speculator could benefit from a pump and dump scheme.

The smaller stock markets are prone to these scams. The Turkish stock market has a trader universally known as “The Dude”  who has not been identified but periodically enters the market and makes large purchases, sending the index up, before dumping the shares again.

“And it's not just frontier markets that have these problems. It's better to describe it as a small cap problem, as even in the West this happens all the time: traders target a company with a small capitalisation, and pump up its stock, before dumping it again,” one trader told bne IntelliNews.

While pump and dump scams are an ugly aspect of money-making on a stock market, the case of Universal Sugurta’s surging shares is also encouraging, as it shows that someone is now interested in local stock prices and willing to put some money into manipulation. Turnover on the TSE had been as still as a millpond since the exchange was launched in April 1994.

That is good news as the government is revving up to significantly expand the free float on the TSE as part of its privatisation drive. Currently the entire market capitalisation of the TSE is equivalent to 12% of GDP. It is mostly made up of state-owned companies that are not freely traded.

As part of the capital market reforms launched in 2019, under the latest development the government hopes to increase just the free float of tradable shares to 5% of GDP and will list some of its most attractive companies, freeing their shares to be traded, to get there. Up to 5% of Uzbekistan’s banking shares have already been made available to foreign investors last year to kick the process off.

In parallel the government launched the Tashkent Commodities Exchange. Over the past several years, the government has required an increasing number of commodities to be traded through the exchange to promote efficiency, and more importantly transparency, in a bid to stem corruption. Cement, plastics, timber, rebar and so forth are all traded through the exchange. The exchange has flourished and also has a platform for government procurement where tenders for services and equipment are listed, as well as platforms for car licence plates and mobile phone numbers, which can be traded; they are social status symbols and so are in high demand.

Another concrete step was taken in implementing this plan this week when the Capital Market Development Agency of Uzbekistan was abolished by presidential decree and its functions were transferred to the finance ministry. The decree also stated that Uzbek companies will be allowed to list their shares on foreign exchanges starting from January 1, 2023.

But the TSE is starting to attract interest. AFC Capital is a fund set up by foreign investors who want to take an easy position in what should become a leading exchange in Central Asia due to Uzbekistan’s large population and already diversified economy.

And the re-rating has already started, albeit it is still in the very early stages. In December, AFC said in a comment published by bne IntelliNews: “It’s early days for a once-in-a-generation revaluation on the Tashkent Stock Exchange. Many listed companies have merely gone from being “unreasonably cheap” to “deeply undervalued”. There should be several more years of upside ahead.”

Likewise, in March the state said it plans to abolish a monopoly on sales of state-held shares. The country's Agency for State Asset Management is to unlock access to all those state-owned companies that are listed on the TSE but that are not traded.

The privatisation drive has already begun after the state sold off the iconic Hotel Tashkent last year and put two dozen state-owned petrol stations under the gavel in March. This month it announced another long list of state-owned real estate assets that will be sold off soon.

The big privatisations of the sexy companies are still ahead but they are now on the docket, says Fiezullah Saidov, director of Uzbekistan Equities in Tashkent and a consultant for the IFC.  Just last week, the government picked Deloitte, Grant Thornton and KPMG to advise it on the sale of 18 state-owned enterprises, UzAssets, an investment company established under the State Assets Management Committee announced. 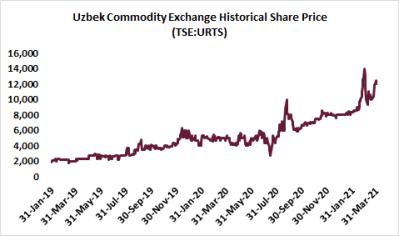 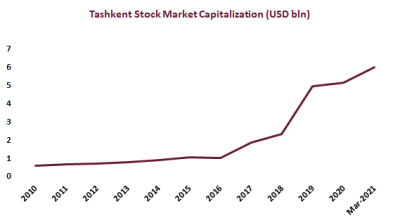