TURKISH MARKETS: Shares and lira sturdy despite ‘tanks at Syria border’ and ‘The Dude’s’ in action 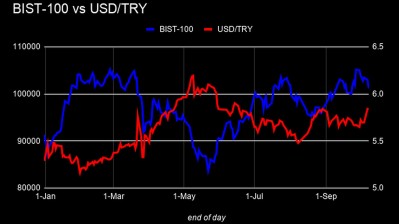 Turkey’s Teflon markets have remained pretty resilient despite the two consecutive shocks that arrived on October 7.

The first shock came early in the day as the White House confirmed Donald Trump had agreed to pull back US forces from the Turkey-Syria border to pave the way for a Turkish incursion, leading to cries of “betrayal” from the Syrian Kurds stationed there who served as the Americans’ indispensable allies in the campaign to destroy the so-called Caliphate of Islamic State on Syrian territory.

The second shock came as the Borsa Istanbul trading session was drawing to a close—Trump, facing a storm of criticism from opposition Democrats and the most senior senators in his own party, tweeted to caution Turkish counterpart Recep Tayyip Erdogan that he shouldn’t go anywhere close to gung-ho in the move across the border. “As I have stated strongly before, and just to reiterate, if Turkey does anything that I, in my great and unmatched wisdom, consider to be off limits, I will totally destroy and obliterate the Economy of Turkey (I’ve done before!),” wrote Trump.

As things stand, the exact details of the deal between Trump and Erdogan are not known, though Pentagon officials have been briefing that the US does not approve of any impending incursion, it has merely said it will not place its forces in the way of one. However, the risks of Erdogan failing to abide by the boundaries of Trump’s “great and unmatched wisdom” (if indeed they are knowable) are unsettling for markets. The advance across the border remains imminent and perhaps the best that can be hoped for is that Ankara will opt to just take an initial thin strip of territory not occupied any longer by Kurds that will serve as a buffer zone.

Another stabiliser for the market came as Trump denied he had abandoned the Kurds, whom he described as a "special people", and praised Turkey as an "important member in good standing of Nato" and a "big trade partner" of the US, despite having previously said he would be quite prepared to blow its economy to smithereens if necessary.

The White House, meanwhile, confirmed a visit from Erdogan had been arranged for November 13.

“Lira down at 5.84, despite talk of state bank selling of dollars,” Timothy Ash, senior emerging markets sovereign strategist at BlueBay Asset Management, said late on October 7 in an emailed note to investors, adding on the morning of October 8: “Looks like Turkish state owned bank intervention again this morning given FX moves....”

“Lira holding around 5.80, but seemingly only because of state bank selling of FX,” Ash added later in another email.

Since most such transactions take place on over-the-counter (OTC) markets, chasing up Turkish state banks’ transactions on the USD/TRY market is impossible, but observers have clocked unexplainable local currency moves and unexplained developments in the central bank’s reserves to identify currency market interventions since last November. Additionally, transaction counterparts have disclosed some details of public lenders’ involvement in interventions, feeding speculation.

The unexplained sum seen in the central bank’s net official reserves to date this year declined to $24.7bn at end-August from $29.6bn at end-July, Kerim Rota, a former Turkish banker, said on September 30 in a tweet.

FX interventions conducted by the central bank noticeably began with the taking of huge short positions in USD forward contracts on the Borsa Istanbul’s derivatives markets following the currency crisis of last August.

“Geopolitical risks will rise once the Syrian operation… commences but until then, run with 'The Dude' this preposterously named, mythical punter who is a huge buyer of Turkish equities today. He's been quiet for a while and his identity remains nebulous but I suspect it is [E]rdogan's private punting pot,” Julian Rimmer of Investec Bank said on October 7 in an emailed note to investors.

There is no certain data available for The Dude’s trading but he was seen on the radar by market players in 2016 after the trading volume of Yatirim Finansman, then a small brokerage in Istanbul, significantly jumped and it started to make the market.

Yatirim Finansman was this year’s largest net buyer on the Borsa Istanbul as of October 2 with TRY3.4bn worth of net purchases, according to a bulletin released on October 3 by Garanti Invest. BGC Partners was the second largest at a relatively limited TRY1.57bn.