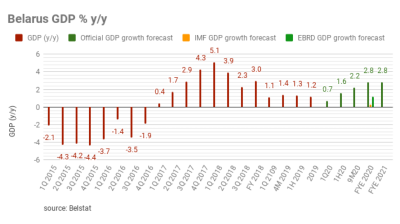 The Belarusian government forecasts a 2% year-on-year GDP drop in January due to the energy dispute with Russia
By bne IntelliNews February 17, 2020

Belarus' GDP shrank by 1.9% year-on-year in January as the post-Soviet country's unreformed economy has been hit by the energy dispute with Russia, the nation's statistics agency Belstat reported on February 17.

Last week, the nation's PM Sergei Rumas attributed the expected result to the cut of oil supplies from Russia to Belarus, as well as crisis in the nation's potash industry, according to Minsk-based online outlet.

The Belarusian economy grew by 1.2% y/y in 2019, according to national statistics agency Belstat. The Belarusian government forecasted earlier a 4% y/y growth last year.

Belarus faces shortages of Russian oil for its two refineries, as Moscow halted crude supplies to Belarus on January 1 after a contract expired, and the two countries are in negotiations over a new agreement. Minsk said later in January that it had secured a temporary limited solution on shipment from Russian oligarch Mikhail Gutseriev's company Safmar, without paying a premium. In past years Belarus bought oil on terms similar to those for Russian independent refineries, which involved a small premium.

The IPM Research Center, a Minsk-based think tank, expects economic growth of 1% y/y in 2020 and 0.8% y/y in 2021, if Russia does not recompense Belarus for the tax maneuver.

The Belarusian Economic Research and Outreach Center (BEROC) said that growth may accelerate to 2% y/y in 2020 because the government plans to raise wages in the run-up to next year's presidential election. In the midterm, however, growth will stay at 1-2% y/y without structural reform, according to BEROC, Minsk-based news agency BelaPAN reported in December.