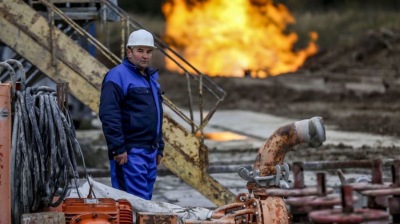 Ukraine already produces 20 bcm of gas a year but consumes c.35 bcm. The head of Naftogaz says the country could become self-sufficient in five years by developing its existing resources as well as biogas.
By Ben Aris in Berlin October 21, 2021

Ukraine will be able to fully supply itself with gas and abandon gas imports entirely within five years, Yuriy Vitrenko, chairman of the Ukraine’s national gas company Naftogaz said during a panel discussion at the Ukrainian Gas Investment Congress (UGIC) in Kyiv on October 20, the company said in a statement.

“We can achieve this goal within five years thanks to three major factors. We have huge potential, and we are inspired by the example,” Vitrenko said.

Vitrenko noted that increasing biogas production is also an extremely important area of development for Ukraine.

Ukraine already produces some 20bn cubic metres of gas domestically from two medium-sized gas basins it has in the east and west of the country. Ukraine consumes approximately 35 bcm a year of gas, with the rest being imported from partners in the west. Ukraine stopped importing gas from Russia about four years ago.

However, almost all the existing gas fields were developed in Soviet times and most of them are close to the end of their useful lives. Since independence the country has not done much to develop the existing resources. The proven reserves could be sufficient for several decades and experts believe there is even bigger deposits that remain unfound that could be enough to make Ukraine self sufficient for even longer.

Additionally the government energy strategy to 2030 calls for a significant increase in renewable energy which is currently making up 12% of the energy mix, that will be increased to 25% and so spin out the gas resources even longer.

“Coming back to the bigger picture, in order to be self-sufficient, in addition to increasing natural gas production, we need to substantially increase production of biogas,” Vitrenko said. “It is sustainable and environmentally friendly. Ukraine has huge potential for biogas production as the largest country in Europe by land area. Land here is much cheaper than in Western Europe. We have huge potential for solar farms or wind farms and for biomass production. We have a very developed agricultural sector, which is also important for biogas production,” he noted.

The Naftogaz CEO also highlighted that improvements in energy efficiency would help Ukraine achieve energy independence. Ukraine used to be the most wasteful user of energy in Europe but has made enormous progress in improving energy efficiency in the last decade, but still has a long way to go.

“Ukraine is two times less energy efficient that the average Eastern European country. Maybe some would say this is good for the energy industry because Ukrainians consume a lot of natural gas. However, in order to achieve energy independence, Ukraine must reduce inefficient energy costs. The cheapest and the most reliable energy is the energy that you don't waste,” commented Vitrenko.

US warns Belarus to keep its commitment to neutrality
54 minutes ago
US Secretary of State Blinken in Kyiv, warns Russia could attack “at very short notice”
2 hours ago
Defence agreement between Slovakia and the US divides politics and society
14 hours ago
Uzbekistan launches production of military drones
19 hours ago
New impetus between Bulgaria and North Macedonia at top-level Skopje meeting
1 day ago