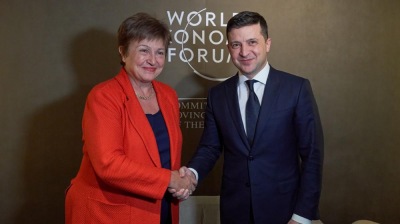 IMF head Kristalina Georgieva with Ukrainian President Volodymyr Zelenskiy at the World Economic Forum. After a year-long delay Ukraine has finally signed off on a new SBA deal with the IMF that opens the way for billions of dollars in aid, just in time to avoid a new crisis
By bne IntelliNews May 22, 2020

The International Monetary Fund (IMF) has signed off on a new staff-level 18-month Stand-by Arrangement (SBA) with Ukraine on the same day that Ukrainian President Volodymyr Zelenskiy signed the new anti-Kolomoisky banking bill into law on May 22.

The crucial deal opens the way for tens of billions of dollars in multilateral aid and makes default on Ukraine’s large debt repayments and a debilitating crisis much more unlikely.

Foreign investors were already buoyed the passage of the so-called anti-Kolomoisky banking bill, which bans the state from returning nationalised banks to their former owners and passed its third reading earlier this week - the key piece of legislation the IMF had been waiting for.

An IMF staff team led by Ivanna Vladkova Hollar concluded remote discussions with the Ukrainian authorities on May 21 and reached a staff-level agreement on economic policies for a new 18-month SBA, the IMF said in a statement on May 22.

The deal will also allow Ukraine to tap more donor money from partners like the World Bank and the EU, which have pledged significant amounts of money, but which was all tied to first getting an IMF deal in place. Earlier Kyiv said that it could receive some $10bn in aid this year.

"The new SBA, with a requested access of SDR3.6bn (equivalent to $5bn), aims to provide balance of payments and budget support to help the authorities address the effects of the COVID-19 shock, while consolidating achievements to date, and moving forward on important structural reforms to reduce key vulnerabilities," Hollar said in a statement emailed to bne IntelliNews the same day. "This will ensure that Ukraine is well poised to return to growth and resume broader reform efforts when the crisis ends. The arrangement is also expected to catalyse additional bilateral and multilateral financial support," she added.

Ukrainian Finance Ministry Serhiy Marchenko said on May 21 that he expects the first tranche from the new $5bn programme to arrive before the end of the month. Ukraine has to repay some $2bn worth of debt, mostly to international financial institutions (IFIs), by the end of this month.

Marchenko also said that he expects the programme to last 18 months. The SBA represents a downgrade from the previously agreed Extended Fund Facility (EFF), a longer-term and more comprehensive deal. However, the IMF said last month that it was switching to the simpler and shorter SBA because of the “unprecedented economic instability” caused by the double whammy of the oil price shock and the coronavirus pandemic.

The change of status was an implicit rebuke for the difficulty Kyiv has had in passing the banking law. The EFF deal was agreed in December, but was not approved by the IMF board of directors and was made contingent on the passage of both the banking law and a bill to create a market for land. The land bill was passed on March 30 in a late night session, but in a massively watered down form that limits sales to small plots and calls for a referendum before sales to foreigners can be allowed, gutting the bill of all its short-term economic benefits.

Oligarch Ihor Kolomoisky, who has been lobbying to have his PrivatBank returned to him after it was nationalised in 2016, is the object of the new banking bill and has attempted to sabotage its passage, slowing the process down.

The presidential media service said on May 21 that the implementation of the law will help improve the "quality and efficiency of the National Bank of Ukraine (NBU)'s fulfilling its functions in the field of banking regulation and supervision, complete the withdrawal of banks from the market/liquidation of those banks, the decisions on which have been cancelled by courts".

“President signs Law on banks necessary for co-operation with IMF. This document fills the legal gaps found during the banking system cleanup in 2014–2016,” the NBU said in a tweet. The NBU has been fighting a running legal battle with Kolomoisky who has launched a blizzard of lawsuits against the NBU and the new state-owned PrivatBank in his attempt to get the latter back. There have also been fire-bombings and violent attacks on the central bank staff and their property that the NBU has branded a “terror” campaign and named Kolomoisky as the instigator.

Rada deputies associated with the oligarch introduced over 16,000 amendments to the banking bill after it passed the first reading on March 30, but the need to read them all was circumnavigated by the introduction and passage of a new law that allows deputies to consider amendments in bulk.

The downgrade to an SBA from the EFF was also motivated by the need for speed, as an SBA is a simpler deal to approve than an EFF that comes with more strings. While the approval of the previous EFF deal was made contingent on new legislation, the approval of this week’s SBA has no strings attached to it and the IMF’s board is expected to approve the deal in the coming week.

“The President @ZelenskyyUa has signed the banking law aimed at improving regulations in the banking sector. The law is the last remaining prior action needed for Ukraine’s new IMF Program,” Ukraine’s finance ministry said in a tweet after the IMF’s announcement.

The IMF deal is of crucial importance to Ukraine, which faced a debilitating default and crisis that would have condemned the country to years of poverty and pain if it had not been adopted. Analysts noted that Ukraine cannot meet its debt obligations without the IMF’s help.

Stuck between a rock and a hard place, the need to reach an agreement with the IMF has forced Zelenskiy to take a stand against Kolomoisky and he has pushed for a deal to be done. On the day of the second reading of the banking bill the president went to the Rada building to lobby deputies to vote for the bill. He also rallied the opposition, and his nemesis former president Petro Poroshenko and his party in particular, in order to raise enough votes for the bill to pass.

In the end the bill was supported by 270 MPs, surpassing the required 226 votes and more than the 246 votes that Zelenskiy’s Servant of the People (SOTP) party commands in parliament. About a dozen members of Zelenskiy’s party are loyal to Kolomoisky and rebelled against Zelenskiy in order to vote for the banking bill. One of the results of this saga is Zelenskiy has de facto lost his majority in the Rada and will have to do deals with opposition parties to get more reformist legislation passed.

Foreign investors have been anticipating the deal after the banking law was passed and Ukraine’s yields have fallen back to the same levels as last year after spiking in March and April as fears of a sovereign default grew. The Ministry of Finance raised some $800mn in its weekly bond auction on May 19 as investors are returning to the high-yielding market.

Even with the IMF deal in place analysts estimate that Ukraine will need to raise at least $10bn on international and domestic capital markets this year to meet its debt repayment obligations and cover a very large increase in the deficit spending to counteract the effects of the coronavirus economic stop-shock.