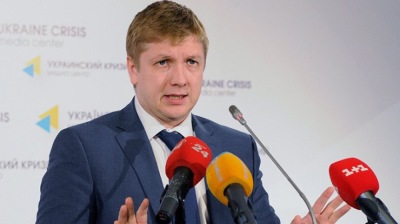 "Naftogaz filed a new claim amounting to $12bn against Gazprom. The main base of this claim is impairment of our [gas transport system] because Gazprom will build bypassing flows and will not honour its obligations to Naftogaz as to the contract holder," Kobolev said as cited by Interfax.

This will provide an opportunity for Ukraine to compensate losses from bypassing transit of Russian gas, Kobolev noted.

Naftogaz is ready to withdraw a lawsuit against Gazprom from the Stockholm Arbitration in the gas transit tariff reconsideration case if the Russian side provides guarantees of compensation payment in the new long-term transit contract, Kobolev said.

Two contracts are currently in effect between Gazprom and Naftogaz, on gas supplies to Ukraine and gas transit to Europe. Both contracts will expire at the end of 2019.

It is looking increasingly likely that Russia will cut much, if not all, of its gas transit via Ukraine when the Nord Stream 2 pipeline, that bypasses Ukraine entirely, comes online in 2020.

The implementation of the Nord Stream-2 project is proceeding as scheduled, with about 370km of the pipeline already laid, Nord Stream 2 AG, the pipeline construction operator, said in December. Gazprom CEO Alexei Miller confirmed that the pipeline was on schedule to come online on January 1, 2020, the day after the transit contract with Urkaine expires.

“We are working on plans that were approved from the very beginning. The plan for the start of gas supplies is January 1, 2020,” Miller said on January 9.

“In the next two years we plan to decommission four more,” Babakov said of pumping stations that compress gas to push it through pipelines. Ukraine inherited 38,550 km of pipelines from the Soviet Union. The main function is to send Russian gas to Europe. This job that could be largely superseded by the commissioning of Nord Stream 2, a doubling of an existing Russia-Germany pipeline. On Sunday, Interfax-Ukraine quoted Babakov’s boss Miller saying of Nord Stream 2: “The plan for the start of gas supplies is January 1, 2020.”

Trilateral Ukraine-EU-Russia talks on gas transit will take place in Brussels on January 21.

"Pleased that the second round of political trilateral talks with Russia and Ukraine on the long-term transit of gas to Europe will take place in Brussels on 21 January. The meeting will build on the progress achieved during previous political and expert rounds," the European Commission’s Vice President in charge of the Energy Union Maroš Šefčovič tweeted.

As reported, the first round of talks in July, according to Šefčovič, was successful. Its main result was the launch of a new trilateral Ukraine-EU-Russia negotiation process on the transportation of Russian gas.