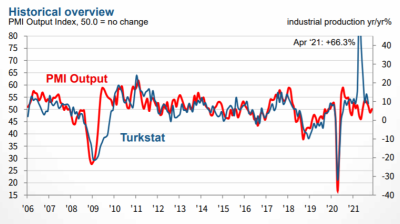 Turkish manufacturers in November raised their selling prices at the sharpest pace on record in response to a marked acceleration of input cost inflation, in turn largely reflective of the Turkish lira weakness, according to the latest Istanbul Chamber of Industry Turkey Manufacturing Purchasing Managers’ Index (PMI) data.

The headline PMI, however, signalled a marginal increase in output in the manufacturing sector during the month following an October slowdown, despite signs that inflationary pressures and supply-chain disruption impacted negatively on demand, survey compiler IHS Markit said. The headline PMI was 52.0 in November, up from 51.2 in October, marking an improvement in business conditions for manufacturers for the sixth successive month (anything above 50.0 is taken as positive).

Andrew Harker, economics director at IHS Markit, said: “While the Turkish manufacturing sector overall remained in growth territory in November, firms are coming under increasing pressure from sharply rising costs as currency weakness exacerbates already high raw material prices. In turn, factory gate prices were raised at the fastest pace on record, contributing to a dimming of new orders. If firms are to gain some respite from these pressures in the coming months they will need to see some stabilisation in the lira.”

The PMI data showed production was supported by a further rise in employment, with job creation now having been recorded in each month during the past year-and-a-half.

“There were further signs of weakness in new orders, however, with total new business slowing for the second month running despite continued growth of new export orders. Where new business eased, panellists linked this to price rises, shortages of electronic components and issues in the automotive sector,” IHS Markit said.

Input costs increased at a substantial pace during November, with the rate of inflation accelerating sharply to the fastest seen since September 2018.

IHS Markit added: “Anecdotal evidence suggested that the latest rise in costs was due to weakness of the Turkish lira. In turn, manufacturing firms raised their own selling prices at the steepest pace in the 16-and-a-half year survey history.

“Meanwhile, suppliers’ delivery times lengthened to the greatest extent since April 2020 amid ongoing challenges sourcing raw materials and issues with transportation. With price rises and supply-chain disruption continuing, firms made further efforts to temper the impacts by expanding their input buying and stocks of purchases. That said, the respective rates of expansion eased amid the slowdown in new orders.”