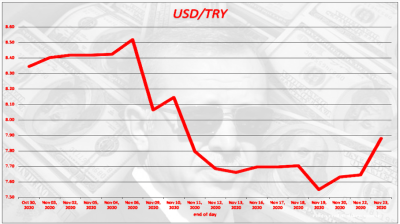 There’s been rising volatility in the Turkish lira since the November 19 rate hike. There will be more and more market pressure for the Erdogan administration to bless more rate increases.
By Akin Nazli in Belgrade November 23, 2020

On November 19, central bank data showed $928mn of portfolio inflows in the week, raising questions over President Recep Tayyip Erdogan’s claim that suggested Turkey attracted $2.7bn of inflows in just the first two to three days of the trading week.

The central bank does not provide clean data for the swap market but bankers’ calculations showed that Turkey actually attracted around $5bn of portfolio inflows in the week, including $928mn that went into Borsa Istanbul, domestic government bonds and domestic corporate bonds plus about $4bn via swaps.

Via the swap channel, foreign investors buy Turkish lira (TRY) in exchange for USD and deposit their TRY at spot to Turkish banks. They eventually benefit from high lira interest rates from the strategy known as the carry trade.

On November 20, the central bank hiked its one-week swap rate to 15% from the previous 13.25%. One-week swaps take a relatively small share in the central bank’s open swap stock with local lenders, but this is really about providing a benchmark for other swap channels, where mainly banks have lower rates.

As of November 20, the lira rate on the one-week swap market stood at 11.78%, lower than the central bank rate (chart below by BloombergHT).

Since the lira is cheaper on the London swap market, Turkish banks prefer to use that market as far as the limits placed on them allow.

On November 11, the banking watchdog BDDK increased local banks’ swap limits on the provision of USD to London at spot in exchange for lira.

This scheme has worked so far to attract portfolio inflows while absorbing lira liquidity in London, but foreign players can at any time use their lira to short the currency.

Due to the curbs placed on the banks’ swap limits with foreign counterparts, the stock in swaps providing USD at spot from Turkish banks declined to $3bn at end-September from $62bn at end-February 2018, suggesting around $59bn of portfolio outflows, according to calculations by @VeFinans (chart below).

On November 23, the first trading day of the third week to commence since the November 6 start of the Erdogan administration’s latest economic U-turn process that commenced with the sacking of the central bank governor, there was a continuation of the volatile course of the lira although its wavelength was relatively smaller compared to the pre-November 19 rate-setting meeting period.

On the Borsa Istanbul front, foreign investors are playing with banking shares. The banking index goes up and down by 5% d/d while stock-based and intraday volatility is higher.

Turkey’s 5-year credit default swaps (CDS) also provide good volatility though the course they have taken has mainly been downwards.

On November 24, the Treasury will hold a 10-year domestic bond auction for the first time since July 2018.

The market has been demanding 10-year papers but the previous top economic management officials rejected such issuance assuming costs were too high as things stood and that they would decline in the period ahead.