TURKEY’S SYRIA INCURSION: How much Kurdish blood will Erdogan risk getting on Trump’s hands? 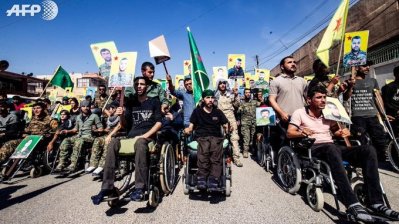 Kurdish fighters. left wheelchair-bound after being wounded in the fight against Islamic State, protest in Qamishli, Syria against Turkey's invasion. Photo by @Delilsouleman.
By bne IntelliNews October 9, 2019

The Turkish lira suffered a modest decline of 0.9% to 5.87 on October 9 as Turkey’s President Recep Tayyip Erdogan finally realised his long-held ambition to push his armed forces into northeast Syria to create a buffer zone free of what he claims are “terrorist” Kurds.

Air strikes and artillery bombardments were in the evening followed by the start of a ground offensive and there were reports that the Kurdish-led Syrian Democratic Forces (SDF) were “responding” in clashes along the border. Very late on October 9 the Turkish military said it had hit 181 “militant targets”. Activists and observers said at least seven civilians have been killed so far and video footage showed people fleeing towns and villages.

As he moves ahead with his military adventure, Ankara’s strongman will be keeping one eye on Turkey’s financial markets—lately described as still “fragile” by the IMF—and another eye on Donald Trump. Although the US president at the weekend agreed to Erdogan’s request for American soldiers to stand aside while the Turks cross the Turkish-Syrian border, he quickly encountered an outcry from Democrats and Republicans alike that the free pass would mean abandoning the very Kurdish fighters who were so crucial in the US-led campaign to destroy the so-called Islamic State Caliphate in Syria. Cue some backpedalling from Trump, in which he warned he could obliterate Turkey’s economy if the offensive went “off-limits”, followed by some further backpedalling from the man on the end of the not-so-secure hotline in the Oval Office in which he said the US did not “endorse this attack” and described the operation as a “bad idea”.

So, as Erdogan pursues what he referred to on Twitter as the “Operation Peace Spring” mission "to prevent the creation of a terror corridor across our southern border, and to bring peace to the area" how much Kurdish blood does he risk getting on Trump’s hands and just how cautious might he be when it comes to attacks that could result in the escape of all or many of the 12,000 Islamic State members that the SDF says it is holding in seven prisons in the targeted region? The US-armed SDF, which lost an estimated 11.000 fighters as the Americans’ indispensable ground force in the battle against Islamic State, claimed that an early Turkish air strike had hit one of the prisons and that they may necessarily have to withdraw forces from the detention sites to help in the fight against the Turks.

Given how much he has boasted about the defeat of Islamic State in Syria—while making little reference to the pivotal role the SDF, including the Kurdish People’s Protection Units (YPG), played in the triumph—Trump will not want to look like a prize arse for waving through an operation that resulted in a revival of the brutal terrorist organisation in Syria. Erdogan has said that he assured Trump that Turkey will take over responsibility for the continued detention of Islamic State members but whether, in the chaos of battle, that will come to pass is far from settled.

As the Turks, allied with Syria’s rebel National Army, and the Kurds awaited further revealing word from Trump on what would be acceptable to him—Turkey’s battered and bruised economy could certainly do without another salvo of US sanctions—the SDF appealed to Washington to enforce a “no-fly zone” to stop “attacks on innocent people”, the UK and France were planning to request an emergency meeting of the UN Security Council to discuss the situation and Nato Secretary General Jens Stoltenberg said that while Nato member Turkey had “legitimate security concerns”, he expected the country to “act with restraint and to ensure that any action… is proportionate and measured”.

“Have to define that as we go along”

As night fell in Syria, Trump said he would support sanctions if Erdogan did not carry out the invasion “in as humane a way as possible”.  Quizzed on what that meant, the president replied: “We’re going to have to define that as we go along.”

US Senator Lindsey Graham, who has warned Turkey he would call for the freezing of its Nato membership should it go ahead with the Syria incursion, is a close ally of Trump on many issues, but after the attack began he said: "Pray for our Kurdish allies who have been shamelessly abandoned by the Trump Administration."

In remarks made late on October 9, however, Trump attempted to paint the clash between Turks and the Kurds as a fateful inevitability because they “have been fighting each other for centuries”. He also showed little regard for the debt owed by the US to Kurdish fighters, remarking: “They didn’t help us in the second world war, they didn’t help us with Normandy..but they’re there to help us with their land.”

Trump also reiterated: “Turkey is now responsible for ensuring all Isis [Islamic State] fighters being held captive remain in prison and that Isis does not reconstitute in any way, shape, or form.”

He also said: “We are taking some of the most dangerous Isis fighters out … and we’re putting them in different locations where it’s secure.” Asked about what would happen to the captured European Islamic State fighters, Trump responded: “Well, they’re going to be escaping to Europe. That’s where they want to go. They want to go back to their homes.”

As Turkish forces continued with their operation in the north, Syrian President Bashar al-Assad pushed soldiers to the south of Syria’s Kurdish-held region, leaving the SDF hemmed in between the two. Early on October 9, Assad-allied Iran, which opposes Turkey’s move into Syria, said its army had begun an unannounced military drill in the northwest of Iran bordering Turkey. ISNA said the drill included rapid reaction units, mobile and offence brigades, and helicopters from the Army Ground Force’s Air Unit. Iranian state TV, meanwhile, said Iran's parliament speaker Ali Larijani had cancelled his scheduled trip to Turkey.

Turkey says that once it has secured territory in northeast Syria it will create a quasi-permanent “safe zone” up to 20 miles deep and 300 miles long (32km and 483km). The plan, it adds, is to resettle two million Syrian refugees currently hosted by Turkey in the zone. Proposals for a $26bn housing construction programme for the territory have been drawn up by Turkish officials. These may come as a boon to construction companies in Turkey humbled by their country’s economic woes triggered by the summer 2018 currency crisis.

The SDF-affiliated Syrian Democratic Council has said an attack on northeast Syria would produce a new wave of mass displacement in the civil-war-torn country. Much may depend on whether the US continues to keep forces in certain parts of the northeast and east.

The northeastern border region currently controlled by Kurdish-led forces stretches 300 miles from the Euphrates river in the west to the Iraq border in the east. The immediate focus of Turkey’s military plans appears to be around a section of the border between the towns of Ras al Ain and Tel Abyad, which are about 62 miles apart. A US official told Reuters on October 8 that US forces had withdrawn from observation posts there.

Referring to the area in which the attack was focused, Ozgur Unluhisarcikli of the German Marshall Fund, said: “It’s a region where the population is Arab and where Turkey has good ties with the leading groups.” If the YPG attempted to hold territory there “it will lose a lot of blood,” he added.