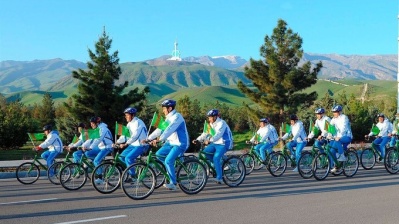 Turkmenistan went ahead with a mass cycling rally to mark World Health Day. Any mention of the "coronavirus" within earshot of officials was not advisable.
By bne IntelIiNews April 7, 2020

Turkey appears to have the fastest rising number of confirmed coronavirus (COVID-19) cases in the world—while Turkmenistan, which is sticking to its official story of “no cases”, and was on April 6 holding a mass cycling rally to mark World Health Day, could be the country most in denial about the threat posed by the virus pandemic.

By the end of April 7, Turkey officially had 34,109 recorded COVID-19 infections (up 3,892 on the day) with 725 deaths (up 76 on the day). However—much to the disbelief of academics who raised fears about its pandemic strategy throughout March—the country claimed to be “coronavirus-free” until March 10 and the veracity of the official virus reporting process faces much scepticism. Some experts fear Turkey’s coronavirus outbreak could be much worse than is painted by the government and might even be “out of control”. Its number of reported infections is increasing at a rate of more than 3,000 a day.

Politically vulnerable because of his country’s fragile economy, Turkish President Recep Tayip Erdogan has resisted calls by doctors’ unions and opposition politicians to order people to stop going to work and stay home. The “wheels of the economy must keep turning”, he has said.

The government has gradually increased measures to battle the virus—for instance people under the age of 20 and over 65 are now subject to curfews, while face masks are being distributed to households free of charge and their use is now mandatory on public transport and in shops and public spaces—but the mayor of Istanbul, Europe’s largest city with 16mn people, is among those who have said that full lockdowns are an urgent requirement. Istanbul, its mayor Ekrem Imamoglu said on April 2, was running out of time to stop a COVID-19 surge.

Meanwhile, there is deep disappointment and frustration among civil society campaigners that a bill due to be passed by parliament this week to free up to a third of Turkey’s prison population on home arrest or early release will not include hundreds of jailed human rights activists, journalists and opposition politicians.

Also, Reporters without Borders said that seven journalists had been arrested for reporting on the pandemic and charged with “spreading panic”. At least 385 people are being investigated for critical social media posts related to Turkey’s approach to its coronavirus emergency.

Over in tightly controlled Turkmenistan, one of the most repressive states in the world, uttering the word “coronavirus” in public can get a person arrested. Cafes and restaurants are open, big weddings remain permissible and mass events—such as the cycling jamboree sponsored by President Gurbanguly Berdimuhamedov, always portrayed as an active participant of all kinds of sports and often pictured on state TV lifting weights in the gym or on his bike—go ahead. 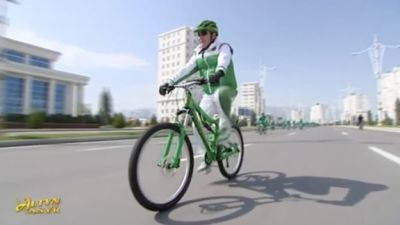 All you gotta do is bicycle... State TV shows Berdimuhamedov on his bike.

Observers fear that Turkmenistan is refusing to acknowledge it has a coronavirus problem—even though it has brought in some restrictions such as the closure of borders and restrictions on inter-city travel—because the image of “health and happiness” is part of Berdimuhamedov ‘s cult of personality.

Berdimuhamedov  proclaimed his presidency as the "era of might and happiness", a message that might prove rather hollow should the pandemic be widely seen to take a terrible toll.

"Official health statistics from Turkmenistan are notoriously unreliable," Professor Martin McKee from the London School of Hygiene and Tropical Medicine, who has studied the Turkmen healthcare system, was reported by the BBC as saying on April 8.

"For the past decade they have claimed to have no people living with HIV/Aids, a figure that is not plausible. We also know that, in the 2000s, they suppressed evidence of a series of outbreaks, including plague."

He added: "We have seen how the Covid-19 infection moved rapidly from China to all parts of the world. In this globalised economy that we now live in, every country is only as secure as the weakest country in the world."

"Even if other countries manage to get the epidemic under control, there is a risk of continued seeding of infections from those countries that have failed to. It seems that Turkmenistan may well be another example."