ISTANBUL BLOG: If you believe in the Erdogan Republic’s coronavirus free status, honk your horn 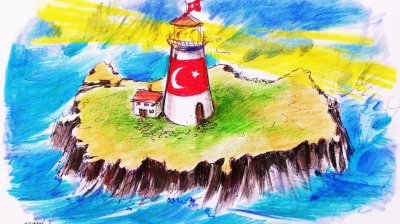 There's Turkey. Then there's the rest of the planet.
By Akin Nazli in Belgrade March 10, 2020

So, what’s the latest on the miracle that is Turkey’s coronavirus-free status? Well, the phenomenon as portrayed by officials clearly hasn’t convinced everyone—Istanbul has been tormented by traffic jams with the sadly unconvinced avoiding public transport—and health minister Fahrettin Koca trod gingerly on March 10 when he conceded that “he can’t say there’s no coronavirus in Turkey” but could say that there haven’t been any confirmed cases to date.

“They said I said this outbreak doesn’t exist in Turkey. I didn’t say it. It’s highly likely that this outbreak exists in Turkey. We can just say for now: we’ve not been able to detect the virus,” the minister added.

It sure is hard work being an official of a banana republic when all you have to offer is illogicalities in front of the camera. Best keep things as incoherent as possible.

Some say the main reason behind the Turkish government’s inability to detect a coronavirus infection is its insistence on made-in-Turkey testing kits, apparently developed after news broke of the new virus spreading from its epicentre in China.

Over in breakaway Turkish Cypriot republic Northern Cyprus, officials found themselves going against the grain as they announced a German woman on holiday had been diagnosed with a coronavirus infection, giving them their first recorded case, Turkish government-run Anadolu Agency reported on March 10.

Screwing money out of Europe

Meanwhile, Turkish President Recep Tayyip Erdogan remained in his parallel universe, but stopped shaking hands. His main agenda item right now is to screw money out of Europe by threatening the continent with another invasion of refugees.

Talking to his hacks aboard his flying palace while returning home from stern faces in Brussels not pleased by what he had to say on matters at the Greek border, Erdogan said on March 9 that he is to host a summit in Istanbul on March 17 with the leaders of France, Germany and possibly the UK.

The dear man has also been talking more nonsense about S-400 and Patriot missiles. It is such utter rot that I can’t be bothered to look up how much Turkey has paid the Kremlin for its S-400s, suffice to say that Erdogan is now stating that the US is indicating that if Ankara doesn’t take the expensive hardware out of its box, Uncle Sam will provide Patriots. Does this blog have any readers who go hungry?

Anyway, at this juncture we find Erdogan, among other things, juggling the slippery balls of conflict-torn Idlib, narked Nato, wretched refugees, pain in the neck Kemal Kilicdaroglu, aggrieved EU officials, the miffed Bulgarian PM, Schengen, Mustafa Kemal Ataturk…, and, how could one forget, the coronavirus.

Erdogan is shown responding to questions about the outbreak at the end of a press release-formulated text, as usual commonly published by all Turkish media outlets. Turkey’s virus-free status, he said, showed how successful the country’s measures have been since coronavirus was detected (what exactly has it been doing that nobody else has? It would be rude to ask). If the status holds, scientists will probably work overtime probing samples of ‘un-infectable’ Turkey and Turks in labs for decades to come.

Erdogan also mentioned that Tourism Minister Nuri Ersoy is good at reading international trends and that foreign visitor developments through July would be important. The executive president trod carefully with his comments on tourism compared to what his trolls have been putting out. They have systematically circulated how virus-free Turkey is set to get a boost from selling holidays and anyone talking about the coronavirus actually being present in the republic is simply trying to undermine the boom in prospect.

Erdogan showed more bravado when it came to the oil price collapse. Turkey is for ever irked by its lack of natural resources, so as a big energy importer it doesn’t forget to send up a winner’s throaty cheer when the cost of oil crashes to earth. Coupled with falling interest rates, Erdogan saw cheap oil as pretty positive for Turkey, but, the personification of charm that he is, he didn’t forget to outline how unsettled he is about the “disaster” for OPEC countries.

Erdogan then shared good tidings on fuel prices in Turkey. The petrol price is to fall 0.6 lira, the diesel price 0.55. Those Istanbullers sat in their city’s traffic constipation won’t be able to express their happiness in words! How about cutting prices on metro tickets to add to the fun!?

But back to health minister Koca for some solemn tweeted words. “A story has been spread suggesting that a US CITIZEN, an 86-YEAR OLD PATIENT, was diagnosed with coronavirus after her Turkey visit. In the records for the last two weeks, there is only one US citizen 86-year old woman. She didn’t visit Turkey. On March 3, she went to Washington from Tirana over Istanbul.”

Singapore and Nigeria have previously made claims that the first coronavirus-infected people recorded on their territories were carried there by Turkish Airlines but such gibberish won’t get a hearing here.