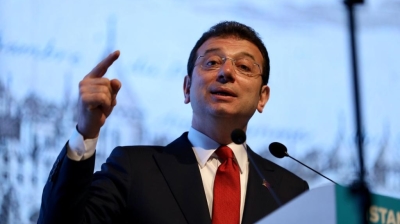 Imamoglu says he wants to take the "politics" out of attempts to ensure Istanbul has an adequate response to the pandemic.
By bne IntelIiNews April 2, 2020

Europe’s biggest city is running out of time to stop a coronavirus (COVID-19) surge.

That was the chilling message put out by the mayor of Istanbul Ekrem Imamoglu on April 2 in an interview with Reuters.

Two million people were still going out into the streets of Istanbul every day and the city, home to 16mn people, badly needed a Turkish central government announcement of a lockdown, Imamoglu, speaking at the mayoral residence, said.

bne IntelliNews throughout March ran reports of experts warning that the Erdogan administration was slow to acknowledge Turkey has a potentially catastrophic problem in the face of the pandemic and was in danger of doing too little, too late.

A difficulty for Imamoglu is that he is an opposition mayor—as the Republican People’s Party (CHP) party candidate he last spring beat the Justice and Development Party (AKP) candidate backed by President Recep Tayyip Erdogan in the Turkish local elections, winning the vote and then storming to victory in a ‘revote’—and is seen as a potential future challenger for the presidency.

In the interview, Imamoglu made it clear he thought revived tensions between the CHP municipality and Erdogan’s government were compounding difficulties in arranging an adequate response to the business and cultural capital’s virus outbreak.

The state, he said, had been slow to react to his repeated calls for talks, and it was wrong that he was only able to meet the state-appointed provincial governor as late as last weekend, a month into the fight against the spread of the virus. “Clearly it has a political basis and this saddens us because such environments cannot have politics,” Imamoglu said.

The mayor reiterated his call for a stay-at-home order for his city, where 60% of Turkey’s officially logged 18,135 cases (linked to 356 deaths as of April 1) have been recorded. “The measures you take for 16 million people, the methods for stopping the pandemic will save Turkey,” Imamoglu said, adding: “We are in the most critical time. Looking at the situation across the world, we are in a period that is very intense and could lead to figures that will upset us very much.”

Imamoglu estimated that 15% of Istanbul’s population were still using public transport or private vehicles. “This means more than two million people [are still going out], and this is very frightening. It’s as much as the population of a prominent city in Europe.”

This week Erdogan clashed with Imamoglu after the mayor initiated a fundraising campaign for the needy in the city. It was blocked by Ankara after the president said the presidency must run such aid efforts. Erdogan subsequently launched his own appeal.

The mayor said he had sent messages to Erdogan. An atmosphere in which they could work together had to be established, he said, noting that he and the president were yet to speak since the outbreak began.

“Around 60-65% of the problem in Turkey is in Istanbul right now. Therefore, we must be able to contact them directly and solve our issues together,” he said.

Having so far resisted calls for a lockdown, Erdogan has said Turkey must “keep wheels turning” to protect and sustain an economy recovering from recession, although he has also stated that if citizens ignore “voluntary” quarantine rules and the virus keeps spreading, measures to contain the COVID-19 outbreak would be stepped up. But indicating the depth of Turkey’s economic troubles, the Turkish lira this week has been trading at weak levels not seen since the country’s 2018 balance of payments crisis.

Turkey’s moves to deal with its coronavirus outbreak have included the halting of all international flights, the limiting of inter-city bus and other domestic travel, the closing of schools, cafes and bars and the suspending of mass prayers and sports fixtures.

Imamoglu said he had taken part in a video conference on the pandemic with around 45 of the biggest municipalities across the world, during which he heard warnings, especially from Milan, Madrid and Rome, about how bad things could get.

“Istanbul is one of Europe’s busiest cities economically. Stopping the pandemic in such a big city will bring comfort to Europe and the world too,” he said.