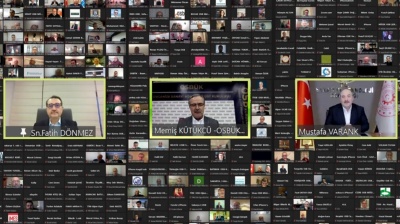 Turkey’s state-run monopolistic pipeline operator Botas has sent e-mails to pharmaceutical, meat and milk producers stating that the natural gas cuts applied on a rolling basis to industry from the start of January 24 no longer apply to their production, local media reported on January 24.

Bread production, however, was not exempted from the gas cuts.

On January 20, Iran announced that it was cutting its natural gas flow to Turkey due to a technical failure. Botas then asked industrial producers to cut their gas consumption by 40%.

On January 22, Turkey’s state-run electricity transmission company TEIAS, another monopolistic enterprise, informed organised industrial zones that electricity use should be restricted to lighting and heating for a given period of “at least” three days.

On January 23, bne IntelliNews explained how Iranian gas does not account for a big share in Turkey’s gas consumption including for the generation of electricity—such a big energy crisis in the country can thus not be attributed to the Iranian gas cut. Turkey, also mired in a lira crisis, is having to dig deep to find the FX to pay its energy import bills.

Although four days have passed since the beginning of Turkey’s energy crisis, the seriousness of the situation has not yet been recognised in Turkey or abroad. In the coming days, there is a good chance the crisis will be making some big headlines.

Such a major energy shortfall is a first for Turkey. The current situation in the country outdoes what was seen during the balance of payments crisis the country suffered at the end of the 1970s. The next stop looking back for negative milestones is the first half of the 1940s during World War II, when bread in Turkey was rationed.

On January 23, we also noted: “Under normal conditions, Borsa Istanbul-listed industrial producers should be hit on January 24 when the market opens.”

On January 24, Borsa Istanbul produced “bloody” trading. Circuit breakers were activated on the shares of many industrial producers.

Global stock exchanges are also suffering stark losses as the end of the new-year rally has already begun (the hypothesis that the beginning of the end would not come until the results of the next Fed meeting are relayed on January 29 proved too optimistic). The “trailer” for the Fed tightening drama is currently on “screens”. Russian trading was also said to have been hit by the tensions over a possible invasion of Ukraine.

There were no notices as yet from major industries such as steel and automotive.

“The industrialist is puzzled, daunted, dispirited. There’s no one who knows or who tells where and when the solution is. It is unclear whether this problem is really temporary or permanent,” Mujdat Kececi, head of the chamber of industry in Denizli province told the same newspaper.

“All of us are in shock,” Mustafa Gultepe, head of the readywear exporters association in Istanbul (IHKIB), said.

Power shortages could cost $250mn per week in readywear exports while exporters in the sector could lose customers that recently shifted their sourcing from China to Turkey, according to Gultepe.

It is particularly those industries that use high-temperature furnaces, such as steelmakers and glassmakers who will face serious costs amid the energy deficit. They are not able to simply switch off and switch on their furnaces.

Costs for re-heating furnaces are high. Additionally, if the steel-iron or glass becomes cold in the furnace, the materials stick to it. Cleaning is expensive and time-consuming.

“Goodness, if they’d informed us about this earlier producers and industrialists would have informed their customers and precautions could have been taken. It happened at the last minute. Everyone is in a panic. Is this temporary or short-term? Everyone is awaiting a statement,” Ramazan Kaya, head of the readywear industrialists association (TGSD), said.

Speculations suggesting that power grid operators were getting ready to cancel contracts, signed earlier this month for electricity acquisition in 2022, were also fuelling panic, according to Yavuz Eroglu, head of plastics industry assembly at the Union of Chambers and Commodity Exchanges (TOBB), and Burak Onder, an audit board member at the homeware and kitchenware manufacturers and exporters association (EVSID).

The electricity restrictions are also shocking news for foreign partners, both it terms of customers abroad and foreign investors in Turkey. They were enjoying nosediving costs in the country. Capital often loves “orderly” regimes, but country risks are currently being activated in Turkey.

Meanwhile, there is snarling in the Turkish real sector. Some industrialists want the grids to pay the cost of the difficulties while some others are blaming intermediary goods producers.

The crisis may repeat itself depending on weather conditions by March 15, Mehmet Dogan, general manager of GazDay Enerji, told Dunya.

On the evening of January 23, industrialists held an online summit with energy minister Fatih Donmez, industry minister Mustafa Varank and officials from Botas and TEIAS. All the sector representatives requested power cut exemptions, but they were all rejected.

On January 19, Turkey’s daily gas consumption was record-breaking at 288mn cubic-metres (m3). It retreated to 240mn m3 during the January 21 to January 23 weekend.

As of January 24, the contribution of natural gas plants to Turkey’s electricity production had only marginally declined.

Meanwhile, much of Turkey remains snowbound. Flights in Istanbul were cancelled.