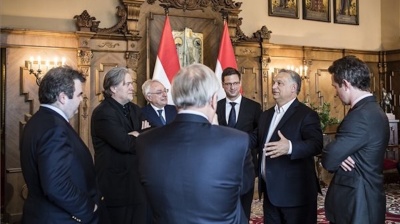 The Orban government did not hide its enthusiasm for Donald Trump's improbable candidacy and distaste for Hillary Clinton ahead of the November 2016 US presidential election. Orban was amongst the first to defend the policies of the then president-elect on immigration and security. Orban himself has become a popular figure among alt-right supporters for his tough anti-Muslim and anti-migration stance.

The conference, organised by government think tank Szazadveg and the Public Foundation for the Research of Central European History and Society for HUF500mn (€1.6mn), was publicised as a key event of Hungary's presidency of the Visegrad Four countries ending this year.

“The Future of Europe” conference was initially scheduled for January, but it was postponed after the elections due to controversies surrounding the speakers, which included British political commentator Milo Yiannopoulos. The former senior editor for Breitbart News will speak at a separate event on Friday.

Organisers refused to give accreditation to Hungarian and international media outlets such as the Guardian or Index that are critical to the government, citing a lack of space; however, footage from the event showed evidence of empty chairs.

YouTube took off the live broadcast of the event due to music rights infringements. During Bannon's lecture, no cameras or recording devices were allowed.

The main topics evolved around how Europe can preserve its culture and identity amid mass migration, which panellist said threatens its existence, and how V4 countries showed a beacon light for the rest of Europe in “defending Christian culture”.

Speaking about Orban, Bannon said that the Hungarian prime minister is motivating Hungarians the way Trump is motivating Americans. He said Orban had gained an opportunity to prove himself.

Bannon, Trump's former campaign chief and chief strategist, said it was a fundamental question of the age whether “we have the courage to protect our civilisation from those that want to destroy it”. The Hungarian people answered this question in the April general election by voting in support of Orban staying in office, he said. “What we have today is not political, but a media opposition”, he said.

Bannon was repeating his well-known theory of corrupt elites leading society for most of his speech. The working class, blue-collar workers in the US and the middle class were completely abused by the globalist elite that ran the country for the past 20 or 30 years, he said, and Trump's victory was a complete rejection of the status quo.

The only time he got a loud applause was when he said that Orban was “Trump before Trump”.

Bannon also spoke to the Hungarian state news channel, where he repeated that “people are tired of being dictated to by people from Brussels, by a kind of  managerial, scientific, engineering elite.”

Commenting in the fence on Hungary's southern border, he said: “You guys built the wall before we did; we'd like to have your wall”.

“If you can't defend your borders, you don't have sovereignty,” Bannon said, calling the southern border of the US “a total joke and President Trump knows that it is imperative that he has to build a southern wall”.