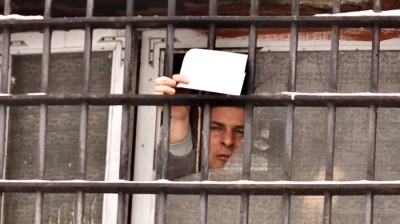 The Ministry of the Interior says it will release all those detained in the last week but NGO claims some 4,000 protestors are still in jail / wiki
By Ben Aris in Berlin August 18, 2020

Thousands of people gathered outside the infamous Okrestina (Akrescina in Belarusian) jail in Minsk on the evening of August 17 demanding the release of detained protesters and political prisoners still in custody now that the street battles with the police are over.

The protest was not far from the prison on Valadarskaha Street where Sergey Tikhanovsky is being held, the popular jailed blogger who was intending to run for president until he was arrested on charges of instigating public disorder. His wife, former English teacher and nominal victor in Belarus’ presidential election, Svetlana Tikhanovskaya, ran in his place.

The Nexta Telegram channel called on protesters to demand all prisoners be immediately released and the crowd brought doctors with them to treat those in detention. The authorities have not responded to the crowd’s demands.

“In Minsk people are holding white-red-white flags literally everywhere in the city. Cars are honking. It doesn’t end,” tweeted Hanna Liubakova, a local journalist that has been reporting on the protests. “It’s the 9th consecutive day of the protests, and people are still outside on the streets. They’ve been walking for kilometres to the Akrescina prison, notoriously known – especially in the past days when Belarusians heard about widespread torture.”

There is some confusion over how many people are still being held in detention. The Interior Ministry reported a few days ago that a total of 6,700 people had been detained during the protests, but it is unclear how many have been released.

Maria Kolesnikova, an ally of presidential candidate Svetlana Tikhanovskaya, said on Sunday around 4,000 people are still being kept at detention facilities following the mass protests of the previous week.

"According to the latest update I have, there are about 4,000 detainees. We demand their release. We also demand the release of political prisoners who were detained before the elections," she told TASS.

The Belarusian interior ministry immediately denied reports about some 4,000 people being still kept in detention, according to Interior Ministry Spokeswoman Olga Chemodanova reported by TASS.

"It is a fake. It is not true. All the lists of those kept at detention facilities in Zhodino and Minsk are available at the doors to these facilities. Stop indulging in fake news," she said.

However, the ministry did say that 2,000 people have already been released, which does suggest at least 4,000 protestors are still in jail.

"The Interior Ministry is worried over the fact that detention facilities are overcrowded. More than 2,000 people have already been released. This process goes on non-stop, it is underway at this moment. Not that fast as one might want it to, although. We are doing our best to resolve the situation,” Chemodanova said in a separate interview.

The situation remains chaotic due to the number of services in involved, the different nature of the charges, the use of temporary detention centres such as school halls after prisons overflowed and the rapidity of the turnover of thousands of people through the centres.

The situation is further confused by the difference between the political prisoners and the protesters that were simply detained for participating in demonstrations.

Human rights defender Ales Bialiatski in Minsk claims the total number of political prisoners in Belarus has soared to 200-300 people in the last week from only a dozen before the elections started a week ago. They face multi-year sentences for trumped-up charges from everything from inciting riots to sedition.

And some people have simply disappeared. One NGO claims that a total of 76 people have disappeared completely as of August 17, according to a report by local media outlet tut.by.

“Neither relatives nor volunteers know anything at all about their loved ones. Their names are not included in the lists of convicts or in the lists of those in Akrestsin Street or in other temporary detention facilities,” the outlet reported.

There has been two confirmed fatalities during the week-long protests, but the loved ones of the missing fear the death toll is actually far greater, given the reports of torture and inhumane conditions in the prisons coming out follow the release of detainees.

Polish proposed ban on Russian rubber may give the European tyre industry a flat
7 hours ago
Prague to have a new municipal government after record-long negotiations
12 hours ago
Party congresses of Hungarian opposition demonstrate deep divisions
12 hours ago
At least 500 dead after huge earthquake hits Turkey, Syria in early hours
12 hours ago
Turkish minister tells US ambassador ‘Take your dirty hands off Turkey’ as sanctions sparks fly
18 hours ago