What sort of future awaits Ukraine? Given the horrific violence in Lugansk and Donetsk, violence that has already consumed hundreds of innocent lives and that will likely consume many more, there has been an understandable increase in pessimism. It’s really hard to hold out much hope for the country’s future when houses are being blown apart by artillery fire, former neighbours are shooting at each other with automatic weapons, and now passenger jets are being blown out of the sky.

However, even before Yanukovych’s messy overthrow Ukraine was on a long-term path to ruin, a path that would be difficult to change even under the most favorable circumstances. Why? What are Ukraine’s problems? While there are many areas of concern, I would say that the most pressing concerns fall into three main categories: demography, geography and politics.

Russia has attracted a lot of negative attention for its low birthrates and high death rates. It’s been called a “dying bear,” a “dying nation,” and “imploding,” among other things. Western experts express broad agreement that its demographic trends will cause serious (and perhaps irreparable) damage to its economy and military. There is also general agreement that the authorities have done little or nothing to address the problem.

However, although you will often hear Russia described as the world’s “most swiftly depopulating country” or read articles stating that it is “suffering from the world’s worst population crisis,” those dubious honours actually go to Ukraine. Since its independence from the Soviet Union, Ukraine has suffered the world’s largest absolute population decline, a cumulative loss of almost 7m people. 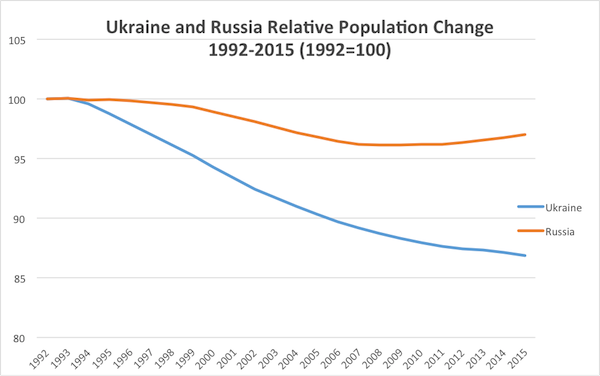 Unlike in Russia, where the economically active part of the population actually grew throughout the late 1990s and early 2000s, the Ukrainian workforce has already started to shrink. The number of economically active Ukrainians has declined by roughly a million people over the past 14 years, and the country’s general demographic trajectory means that, unless there is a dramatic and unprecedented increase in immigration, this decline will continue indefinitely. It might sound a bit overdrawn, but Ukraine’s economy will have to rely on an ever-shrinking number of workers forever.

Ukraine’s demographics aren’t just among the worst in the Europe, they’re arguably the worst of any country on earth. Regardless of which course Ukraine chooses, whether it integrated with Europe or the Russian-led Eurasian Union, its demographic trends will exert a strongly negative influence on its economy.

It’s not a coincidence that the most economically successful of the “new” EU entrants, the Czech Republic, Slovakia and Poland, are all located close to Europe’s largest economy. Proximity to Germany and its enormous domestic market gave these countries a realistic opportunity for export-led growth (in many cases led by German firms looking for low-cost manufacturing). The transport challenges associated with pursuing this growth model were real, post-communist countries generally inherited underdeveloped and poorly-maintained infrastructure, but the distances involved were small enough that they could be overcome.

Ukraine is in an entirely different situation. A large percentage of its population and almost all of its heavy industrial base is in the Eastern part of the country. Dnepropetrovsk, Kharkiv, Donetsk, and Lugansk are all several hundred miles away from places like Bratislava and Warsaw, much less major cities in Western Europe. Even if Ukraine’s infrastructure were up to par (and it’s not, its roadways are widely recognized as some of the worst in the world), the sheer distances involved severely complicated any attempt to pursue an export-led growth model.

Ukraine’s geographic position doesn’t make integration with Europe impossible, but, unlike the most successful post-Communist countries, it doesn’t have any lucrative export markets on its doorstep. Developing Ukrainian exports to Europe will be a much more difficult, expensive and time-consuming process

While many analysts now declare that, thanks to Russian intervention in Crimea, Ukraine’s political divisions are a thing of the past, independent polling conducted on behalf of US organizations like the Broadcasting Board of Governors (BBG) and the International Republican Institute (IRI) continues to show vast differences in outlook between the country’s western and eastern halves.

The IRI’s figures showed similarly vast differences between the two regions. 64% of west Ukrainians expressed support for the idea of joining Nato, while in the east the figure was a mere 14%. Similar gaps were encountered when Ukrainians were asked about joining the EU (90% support in the west, 20% in the east) and on the willingness to suffer temporary economic pain in exchange for long-term benefits (66% support in the west, 17% in the east). There wasn’t a single significant issue on which polling showed the two regions in agreement.

It is conceivable that, in the very long term, Ukraine’s regional divisions will become less significant. But at the present time they show no sign of diminishing in significance. In the past intense east-west differences, and the political deadlock they inevitably create, have made Ukraine virtually ungovernable, and this will continue to be the case for the foreseeable future.

Compared to the post-Communist countries that have had the greatest success in integration with the EU, Ukraine is in much worse demographic, geographic and political situations. The country’s population is in uninterrupted free-fall, it is far away from Europe’s economic center of gravity, and its politics continue to be riven with huge regional differences. Given these factors, it’s hard to see how the country could make a “European choice” even in the most favourable of circumstances.

Mark Adomanis is an MA/MBA candidate at the Lauder Institute at the University of Pennsylvania. He regularly contributes Russia-related writings to a range of outlets such as True/Slant, Salon, Forbes and The National Interest.