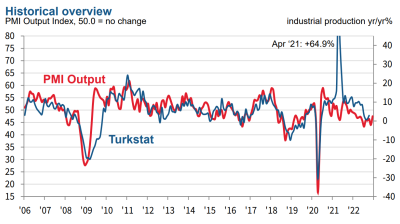 Tentative signs of improvement in Turkey’s manufacturing sector at the end of the year were detected by December’s Istanbul Chamber of Industry Türkiye Manufacturing Purchasing Managers’ Index (PMI) survey.

Andrew Harker, economics director at S&P Global Market Intelligence, said: "There were some tentative signs of improvement in the latest PMI survey, which if continued into the new year could see the Turkish manufacturing sector gaining some ground.

“While demand remains fragile, particularly internationally, cost pressures are not as extreme as earlier in 2022 and supply chain conditions are improving, hopefully providing a tailwind to the sector heading into 2023."

The headline PMI rose to 48.1 in December from 45.7 in November. Although still signalling a moderation in business conditions over the month (only figures above 50.0 denote a sectoral expansion), the latest reading was the highest since June and indicated a modest softening in the health of the manufacturing sector.

Total new orders slowed to the joint least extent in almost a year. “That said, there were some reports that inflationary pressures continued to weigh on demand, while global market weakness meant that new export orders moderated to a greater extent than total new business,” S&P said.

Input buying moderated to a much softer extent than in November, the survey also showed. “Meanwhile, these signs of improvement supported a second successive month of employment growth. In fact, the rise in staffing levels was the sharpest in 10 months,” S&P added.

After having slowed to a three-year low in November, the rate of input cost inflation remained relatively muted in December, the survey also concluded. In turn, output prices rose at the same pace as in the previous survey period, with the rate of inflation much softer than seen earlier in the year.