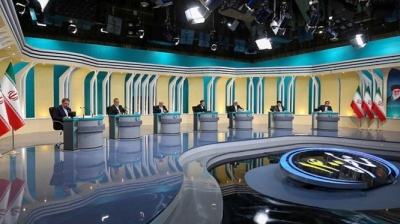 The second televised Iranian presidential debate took place on June 8 with the seven candidates permitted by the vetting body to contest the presidency engaging in sometimes stormy argumentation amid rows over the presentation’s ‘game show’ format and anxieties that the June 18 poll will produce a record-low turnout. Most potential voters were left scratching their heads.

Topics ranging from the role of women in society to the Iranian Azerbaijanis and US sanctions were discussed. Even Korean ‘K-pop’ music got a mention in reference to the poor state of the local music scene. Only one candidate appeared to shine during the Islamic Republic of Iran (IRIB) state TV broadcast, while the run-up to the actual debate outdid the talking points raised.

Abdolnaser Hemmati, previously dubbed the saviour of liberal urban voters in the country, given the exclusion of leading moderates from the contest—for reasons the Guardian Council did not deign to share with the electorate but which were accepted by the supreme leader—flailed around with various topics, while complaining that his position as central bank governor—from which he was dismissed almost immediately after he declared that he was bidding for the presidency—was always undermined by sanctions. At the same time, Hemmati, who said he was standing for the “silent majority”, went for direct hits on the candidacy of frontrunner and religious hardliner Ebrahim Raisi for his actions as head of the judiciary.

Hemmati said he’d entered the fray to bring change to people’s social and economic lives. There was a “corrupt” current flowing through and controlling the country’s entire economy, he remarked, adding that some in the present power structure actually benefitted from the sanctions imposed on the country by conspiring to raise margins within restricted business.

He also threw brickbats at the hardliners for the attack on the Saudi diplomatic mission amid a series of angry protests in 2016, which prompted Riyadh to cut ties with Tehran that year. Without stating it directly, he was essentially saying that there was a link that could be drawn between those who liked the country's isolation and attacks in Tehran and Mashhad on other countries' representations.

Hemmati dismissed criticism that he was responsible for the dire state of the economy, given that he only served as central bank chief for two years. “I think the gentlemen should write a letter to [ex-US president Donald] Trump to tell him that they are holding me responsible for all the plights that he caused to the people,” he said.

He also talked of the need to fully lift controls placed on peoples' lives and of how the young generation in Iran are growing disenchanted with the state of things and are ignoring the entire Islamic Republican system and want to emigrate.

Raisi, for his part, attempted to quell dissatisfaction among the sizeable Iranian Azerbaijani minority in the country, amounting to around a fifth of the 84mn-strong population, saying that “they are very kind to me” in his introductory remarks.

He insisted that the “cruel sanctions” should be lifted and said that any elected government should make sanctions-lifting and the neutralisation of US-directed economic embargoes priorities, but he added that he would also concentrate on ways to counter and dodge Washington’s economic assault.

Referring to a plan to revive the economy, he described 70% of the country as inactive.

Raisi has resisted opportunities to defend himself against claims that he has not received a decent education in economics. In the debate, he said he would not waste time on such matters given the very limited number of minutes he was awarded to address viewers as part of the programme format.

Apart from Hemmati, there is one other challenger who can be described as reformist, namely Mohsen Mehr Alizadeh, an Iranian Azerbaijani from Maragheh in Iran’s East Azerbaijan Province. He took offence at Persian assumptions over his native tongue.

In a previous event, another candidate, hardline former lawmaker Alireza Zakani, said that Azerbaijani was a dialect of Persian. That caused a fair amount of ire among Iranian Azerbaijanis. Mehr Alizadeh hit back at the assumption.

He also attacked Raisi, repeating claims that he was not qualified to run the country as he did not finish high school prior to heading to the seminary.

“If your vote didn’t count, why would they limit the number of the candidates the way they did?” he said looking directly into the camera, adding: “I know you’re tired of the difficulties, of the restrictions.”

He also criticised internet censorship in Iran and the failure of administrations to date to provide broadband connections to many people. He said a Mehr Alizadeh government would work to make the economy more connected with the worldwide web and internet economy.

Drawing anger from Raisi, he went on another attack in his closing speech, saying that “forces” were moving the “sun and moon to make one man president”.

One aspect of the debate were the apparently interchangeable positions taken by so-called hardliners and reformists. All sides referred to free state money that they would throw at the people. Housewives could be paid a stipend to stay at home, former Islamic Revolutionary Guard Corps (IRGC) chief Mohsen Rezaei suggested during his turn to talk. Let’s stop there.