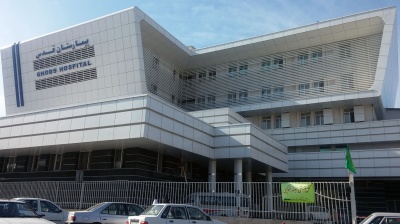 There are fears that the US “economic war” waged against Iran could imperil the country’s medical supplies if financing lines are blocked. Pictured is Quds Hospital in Arak, western Iran.
By bne IntelliNews November 5, 2018

The world's biggest interbank-transfer network, SWIFT, on November 5 announced that it was taking the "regrettable" step of suspending some Iranian banks' access to its messaging system "in the interest of the stability and integrity of the wider global financial system".

Belgium-based SWIFT (Society for Worldwide Interbank Financial Telecommunication) did not specify which “certain Iranian banks” it meant and did not mention the reimposed heavy sanctions triggered against Iran by the US earlier in the day. However, Washington had advised the service that it was expected to comply with the US restrictions and that it could face sanctions if it failed to do so.

The move came as a disappointment to those trying to protect Iran’s trading activities, particularly given the potential disruption the loss of the system could cause to supplying the country with basic foods, medicine and other humanitarian supplies. Two weeks ago, hopes rose that the Trump administration would tolerate Iranian banks using the worldwide financial telecommunication system—a report in a conservative media outlet, The Washington Free Beacon, said US officials had been persuaded by European counterparts who pointed out the danger of Iran suffering food shortages as a result of an ejection from SWIFT.

"The Europeans are clowning the Americans," one source familiar with discussions between American and European officials was cited as saying by the newspaper. "They sold [Treasury Secretary Steve] Mnuchin on this idea that keeping Iran on SWIFT will generate intelligence—the word they keep using is ‘leads'—and Mnuchin is now echoing Obama talking points about how sanctioning some banks is enough."

U-turn from Mnuchin?
If the report was accurate, Mnuchin has clearly made a U-turn. “SWIFT is no different than any other entity,” Mnuchin told reporters on a conference call on November 2, Reuters reported. “We have advised SWIFT that it must disconnect any Iranian financial institutions that we designate as soon as technologically feasible to avoid sanctions exposure,” he added.

Iran uber-hawks such as US National Security Advisor John Bolton, who has talked of achieving regime change in Iran, have advocated disconnecting Iran from all international trade.

Should the Democrats win control of the House of Representatives and Senate in the US mid-term elections on November 6 there is the possibility of the party using a blocking statute on the basis of a humanitarian argument to prevent the hardline Republican White House from pushing through the expulsion of Iran from SWIFT.

Fearing a blanket ban on Iranian banks being connected to SWIFT, French officials have been looking to keep at least one Iranian bank connected to the financial telecommunication system, AFP reported on October 22.

US Secretary of State Mike Pompeo on November 5 vowed that Washington would be "relentless" in pressuring Iran and that the sanctions would accelerate the rapid decline of Iran's international economic activity.

However, shortly after Washington’s heaviest sanctions ever levied against Iran kicked in on November 5, Iranian President Hassan Rouhani declared: “We are in the economic war situation. We are confronting a bullying enemy. We have to stand to win.” He vowed Iran would breach the sanctions regime.