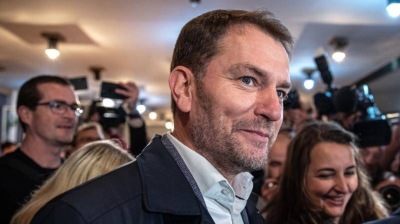 Slovak Prime Minister Eduard Heger’s minority government has fallen after 78 legislators backed a no-confidence motion initiated by his former coalition partner, plunging the Central European country into chaos just as it is struggling to cope with a worsening cost of living crisis and faces significant opposition to its support for Ukraine.

The collapse of the centre-right cabinet is the culmination of two and a half years of infighting between the populist Ordinary People party (OLaNO) of Finance Minister Igor Matovic and the neoliberal Freedom and Solidarity party (SaS) of Richard Sulik, worsened by the stresses of the pandemic and the current soaring cost of energy.

In a day of high drama and low farce,  Matovic first offered to resign in return for the SaS withdrawing its no-confidence motion and approving the state budget for next year.

“The fall of the cabinet at this time will cause total chaos and the unapproved state budget will see people in  hardship and exceptional economic damage done to the state,” Matovic said in a  statement in the morning, explaining that he does not want “the people of Slovakia to be hostages of political games”.

Matovic went to the Presidential Palace to hand in his resignation; however he then took the letter back from presidential officials, saying a friend had told him "fighters do not bow down to the mafia". He said later that Sulik had joined the "mafia" that had ruled the country before the last election. "I have evidence of Richard Sulík's serious corruption, which I will publish during the election campaign," he promised.

President Zuzana Caputova later confirmed this account on her Facebook page.  She wrote that Matovic “signed the resignation in front of the office employees but changed his mind at the last possible moment and abruptly took the signed document away from the hands of the head of the office”.

Sulik then issued a statement saying that “the fall of the cabinet is unavoidable” and that Matovic’s behaviour reflects his“unacceptable style of governance”.

Matovic's party subsequently left the chamber for the vote, which the government lost by 78 votes to 20 in the 150-seat parliament. 76 votes were needed for the no-confidence motion to pass.

Previously the two main governing parties had the support of 73 deputies in the parliament. When they took office after the 2020 election they commanded 95 seats in the chamber.

Matovic's party colleague, Heger, is due to hand in his resignation to the president on December 15 but is set to be asked to continue in a caretaker capacity while the politicians bicker about the next steps. The scheduled date for the next general election is February 2024 but most observers believe that early elections will now have to be held.

The vote leaves Slovakia in a state of political confusion, with  approval still needed for next year's state budget  as well as bills to help citizens cope with the soaring cost of energy. If the budget is not passed, Slovakia will continue with the budget totals for this year, restricting help for those struggling with the cost of living crisis.

The country is also deeply divided over the Ukraine war, with a significant minority believing that it should – like neighbouring Hungary – not take sides because of its heavy dependence on Russian gas. Former leftwing premier Robert Fico has led rallies against the war and has promised to end Slovak support were he to win early elections.

Fico, the country's dominant politcal figure of the past 15 years, was forced to resign in 2018 following the pressure from protests sparked by the killing of investigative journalist Jan Kuciak and his fiancé.

This wave of protests against corruption later propelled the OLaNO-led coalition to power but both OLaNO and its We are Family partners are young, populist vehicles built around one man, with little in the way of ideology or national organisations. As bne IntelliNews predicted in July, the government's collapse was only a matter of time.

Ending the political turbulence will not be easy. Caputova has said she does not want to appoint a technocratic government – something Slovakia has never had. Appointing her own government could damage Caputova's chances of winning a second term in 2024. She said it was "not the dream or wish of any rationally thinking president" and would only be a last resort.

Instead the politicians will have to come up with a new coalition that commands a majority or agree on a caretaker government leading to early elections, something that would require a three fifths majority in the parliament. Neither will be easy, given the deep divisions and the fact that Matovic and Sulik at least agree on one thing: they both are currently opposing a snap poll.

Sulik said his party will most certainly not back early elections so as not to pave way for the “early return of Robert Fico,” but did not rule out backing legislative changes which could lead to shortening of the parliamentary term.

Fico has said he wants early elections in May or June and would support such legislative changes. Regarding Matovic, he said: "I hope you no longer have any doubts that he is a psychiatric patient".

Fico's former colleague Peter Pellegrini, who took over after his resignation but then founded his own centre-left Hlas-SD party, has also backed snap elections. "A bad and incompetent government has fallen," wrote Pellegrini  on Facebook. "It is the most beautiful gift to the Slovak people under the Christmas tree."

Recently Boris Kollar, leader of the radical rightwing We are Family party in the government, has also come out in favour of early elections.

The infighting and the country's economic woes have cost the governing parties  most of their support, putting the opposition parties in a commanding position. According to a recent Focus opinion poll, Fico's populist Smer-SD has 15.8% support, while Hlas-SD has 19.9%.  The two ruling coalition parties – OLaNO and We are Family – are in sixth and seventh place in the polls, each winning around 7% support, just above the 5% threshold to enter parliament.

Given the deep political divisions, it is difficult to see how any group of parties will be able to form a stable future government either before or after the elections. Even a coalition designed mainly to keep Fico from returning to power would be difficult to form, because many parties continue to refuse (at least publicly) to contemplate working with each other.