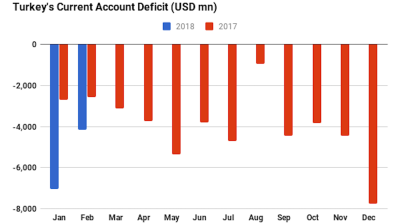 Even a marginally better than expected set of latest current account deficit data on April 11 did little to restrain the record-breaking slide of the Turkish lira (TRY), which set a new all-time low-point against the dollar of 4.1944 in early afternoon trading.

Turkey’s central bank announced a February current account deficit of $4.15bn, against a market expectation of from $4.2bn-$4.3bn. Nevertheless the deficit was up 62% y/y, bringing the cumulative deficit in the first two months of 2018 to $11.2bn, a significant 113% y/y deterioration.

Total portfolio outflows in February amounted to $297mn while FDI outflows were $268mn. Turkey mainly financed its deficit in the month via $1.38bn of inflows under the net errors and omissions item, indicating some locals were perhaps buying TRY on weakness.

“The reversal of portfolio inflows is a concern, as they have been funding half of the current account deficit, so if they reverse this causes double trouble for the central bank.” Timothy Ash, an analyst at Bluebay Asset Management, said in an e-mailed comment.

“This [current account] release just affirms the vulnerabilities on the balance of payments front for Turkey, and underlines the challenges for the central bank in managing the lira when Erdogan has tied both hands behind its back in terms of limiting its ability to hike policy rates”, Ash said.

Turkish Economy Minister Nihat Zaybekci kept up the government’s defiant tone against the sliding lira and macroeconomic imbalances, saying that 2018 GDP growth could come in above 6%, outstripping fellow OECD members.

“The exchange rate picture does not reflect Turkish reality”, according to Zeybekci. That brought a wry response from Ash, who said: “You might not like it, but it is the reality of where it is.”

The TRY’s woes on both domestic and international economic concerns were not at all helped by the dramatic increase in tensions over the alleged chemical attack in Syria, fuelled by an incendiary tweet from Donald Trump in which he responded to a threat from Russia to shoot down missiles fired at Syria with the retort: “Get ready Russia, because they will be coming, nice and new and ‘smart!’ You shouldn’t be partners with a Gas Killing Animal who kills his people and enjoys it!” The sell-off of the Russian rouble following Washington’s imposition of further sanctions against Russian oligarchs was also an aggravating factor.

PM tries to assure market of “necessary” central bank measures
The TRY ended April 10 on 4.1134. By around 18:15 Istanbul time on April 11 it had gained from the new historical trough of 4.1944—which took the currency’s depreciation against the dollar so far this year to 9.4%—to stand at 4.1521.

Comments from Prime Minister Binali Yildirim in which he said the central bank is responsible for monetary policy, is in command of the agenda and would take the “necessary measures” may have been of some benefit. Yildirim pointed to global conditions and regional geopolitical risks as driving what he saw as a temporary descent of the lira and said there would be no letup in the fight against the country’s double-digit inflation. Turkey, the PM, also underlined has strong instruments it can use against an FX rout.

However there are genuine concerns on the market that the central bank’s monetary independence has been hopelessly compromised by outspoken populist President Recep Tayyip Erdogan’s demands for interest rate cuts, as against hikes, despite the economic environment and traders may not feel that the situation can wait until April 25, the date of the next meeting of the central bank’s monetary policy committee. Action sooner rather than later is wanted by those not persuaded by Erdogan’s economic prescriptions.

Bloomberg Markets summed up the precariousness of the situation, writing on April 11: “Shorting the Turkish lira is becoming one of the easiest trades in town. The wager is simple: the central bank is going to hesitate to defend the currency by raising interest rates given President Recep Tayyip Erdogan’s explicit criticism of high borrowing costs. And that’s allowing hedge funds and other speculators to pile up one-sided bets against the lira as it extends one of the biggest declines in emerging markets this year, hitting record lows against both the dollar and euro.”