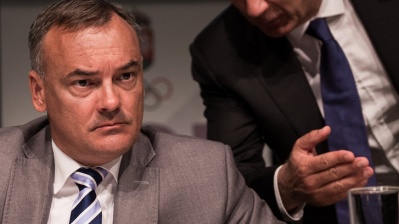 A sex tape showed Zsolt Borkai, Fidesz mayor of Gyor, with prostitutes one week before elections. / wiki
By Levente Szilagyi in Budapest October 7, 2019

An anonymous blogger has released a sex video showing Zsolt Borkai, the Fidesz mayor of one of Hungary's largest cities, on a yacht with prostitutes less than one week before the local government elections, local media reported on October 6.

Borkai, an Olympic gymnast champion and former head of the Hungarian Olympic Committee, is fighting for his political life after shocking revelations were made about him.

The mayor of Gyor, home to the largest Audi engine factory globally, cancelled a campaign rally on October 5 and posted a family photo on his Facebook page captioned “We stand by. For better or worse”. Neither he nor the ruling Fidesz party have commented on the corruption allegations or the sex video so far.

A blog called the Devil's Lawyer accused Borkai and his lawyer Zoltan Rakosfalvy of corruption and using laundered money to organise a cruise on the Adriatic Sea during the Pentacote holidays in 2018.

Initial pictures, released on October 4, showed him in the company of prostitutes. Two days later they were backed up by a video accompanied by scathing reports of corruption claims. The blogger, who seems to be an insider of the ruling Fidesz business entourage, promised to release new information and possibly more compromising photos on a daily basis.

"I'm a lawyer, as my Fidesz friends and clients call me, the Devil's lawyer. I'm not the only one dealing with dirty affairs, but the most shocking ones have been entrusted to me. An unscrupulous man serving the unscrupulous. What others see in the movies or read in books, I’ve been an active part of,” the blogger wrote, prior to citing a long list of murky dealings, which if verified, could be very damaging to the ruling Fidesz party.

Discussing his motives, the blogger wrote that he or she wanted to quit and step back, but was not allowed to do so and that threats were made against him or her.

Hungary's pro-government media has been entirely silent about the developments surrounding Borkai; but, at the same time, they continued with a sleaze campaign against opposition figures. Independent media's handling of the story seems to be very cautious as they work to verify the serious claims.

The blogger claims that Borkai received kickbacks from the owner of a plot after it was acquired by Audi.

His lawyer Rakosfalvy acquired the area at a depressed price. That rose multifold after Audi expanded its operations in Gyor.

The blog also alleges that Borkai has an illegal bank account in Croatia, where he deposited money during the Pentacote trip. The blogger cites tips on money laundering practices and dealings with various ministries.

The reaction from opposition parties suggests that they are waiting to see how the blogger's claims play out. So far they have been very cautious with their reactions.

The ruling Fidesz party looks set for its latest sweeping victory at the local elections on October 13, but the race is very tight in big municipal towns and in Budapest. Losing Gyor or other county seats and seats in the capital would be a major setback for PM Viktor Orban's party.