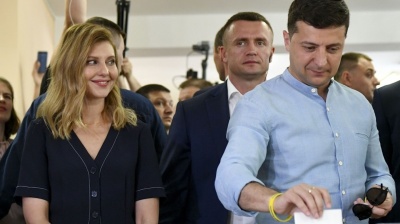 President Volodymyr Zelenskiy votes on July 21. His Servant of the People (SOTP) party is on course to take sole control of Ukraine’s parliament.
By Ben Aris in Berlin July 22, 2019

Servant of the People (SOTP), the party of Ukraine’s President Volodymyr Zelenskiy, is on track to take sole control of Ukraine’s Verkhovna Rada without the need for a coalition, following an unexpectedly good showing in the single mandate voting.

“With a likely score around the 44% mark according to the National Exit polls, SOTP took a bigger share of the vote than any other political party in any of the country’s seven previous parliamentary elections. Not only that, but it now looks like the party is on track to win an absolute majority in the parliament, again an incredible first in the country’s post-soviet history,” said bne IntelliNews contributor Fabrice Deprez, writing for BMB.

However, according to reports on July 22 Zelenskiy may invite Golos (aka Holos) of rock star Svyatoslav Vakarchuk to form a coalition government anyway to ensure a broad coalition and to prevent Vakarchuk's party aligning with the old guard. Golos’s top managers have suggested it might align itself with the parties of former president Petro Poroshenko and former prime minister Yulia Tymoshenko.

With 54% of the vote counted, SOTP won the most votes in 22 of the country’s 25 regions. European Solidarity, the party of former president Poroshenko, won in the foreign constituency with 29.55% of the vote, just ahead of Servant of the People’s 28.13%.

In Ukraine’s complex mixed electoral system, only half of the deputies are elected on party lists. The other half are chosen in single-mandate districts, and it’s because SOTP’s candidates did much better than expected in those local constituencies that the party will most likely win a majority. That might be because most Ukrainians did not really care whose name was on the ballot: they voted first and foremost for the party of Volodymyr Zelenskiy.

Despite a campaign catering specifically to voters from Western Ukraine, Poroshenko’s European Solidarity party failed to win a single region – almost a repeat of the presidential vote where Poroshenko beat Zelenskiy only in the Lviv region.

The other brand new party Golos is slightly ahead of Poroshenko’s in the single mandate vote (23.96%, to 21.71% for European Solidarity).

The results are a revolution for politics in the country. More than 70% of the deputies in the next parliament could be newcomers. In the single-mandate districts, members of the old elite were crushed by unknown candidates from SOTP.

The People’s Front, the biggest party back in 2014, was wiped out, just like the reformist Samopomich party (11% in 2014) and the populist Radical party. The share of the Bloc Petro Poroshenko, rebranded as “European Solidarity”, was more than halved, from 21% in 2014 to about 8% today. In this political storm, only the main pro-Russian party, the Opposition Platform, remained steady, at around 10%.

“The big question now is what Zelenskiy will do with this unprecedented mandate. Beyond a focus on anti corruption issues and the war in Donbas, there’s still little we know about his plans,” said Deprez.

“And in the parliament, it’s also very much unclear how this wave of new faces, split into many different interest groups (some with shady backgrounds) will act. With a parliamentary majority, everything will depend on Zelenskiy himself: there’s no doubt that many in Kyiv and abroad would have liked to see Servant of the People into a coalition with the young, pro-Western Golos party, who could have acted as a check on Zelenskiy’s power. But it now looks like the former comedian will be able to go solo, both a huge opportunity and a dangerous prospect,” Deprez added.

The Golos party would be ready to propose Vakarchuk for prime minister, the head of the party’s electoral headquarters announced on Sunday evening, but Zelenskiy seems to be intending to appoint a technocrat prime minister.

Ukraine’s Eurobonds rallied to new all time highs as the markets opened on Monday following the elections, but despite the euphoria Zelenskiy has actually said very little about what he will do.

In general Zelenskiy is seen as pro-Western, pro-business, and any less market favourable initiatives will be moderated in discussion with G7 ambassadors and IFIs, says Tim Ash, head of strategy at Bluebay Asset Management, adding that who is chosen as prime minister will be an important indicator of the direction the country is heading in.

“Over the weekend, Zelenskiy highlighted herein the important role of the Rada as a check and balance, and indicated that he will nominate a prime minister who is a respected economist, with good relations with the West and who has had no political career as yet. This suggests that he has someone clearly in mind. But it suggests a technocrat as prime minister – and I think it likely means one of the following: [Oleksandr] Danyliuk [head of the National Security and Defence Council of Ukraine], [former economy and trade minister [Aivaras] Abromaviscius, [banker and former Euromaidan activist Vladyslav] Rashkovan, Kobylev or [Naftogaz executive director Yuriy] Vitrenko. All would be excellent choices from the market perspective,” said Ash in a note.

Although SOTP has seemingly secured a majority in its own right, it will be interesting to see if Zelenskiy still looks to bring Vakarchuk and Golos into a broader reform coalition. Zelenskiy has already signalled that he will hold coalition talks with Golos. If he looks to create a coalition even though SOTP has a majority, it will send a very good signal, as it will imply he understands the need to build a strong coalition to push through a radical reform agenda – particularly important therein still will be furthering the fight against corruption, judicial reform, and land reform,” says Ash.

And a new and improved deal with the International Monetary Fund (IMF) is on the cards. The expectations are that the existing stand-by arrangement (SBA) will be revamped into a longer term Extended Financing Facility (EFF), with additional monies provided to augment the programme – perhaps up to $9bn from the current $3.8bn SBA deal.

“I would expect a new EFF to be in place, with important structural benchmarks added, by the autumn AGM of the IMF in mid-October,” said Ash.