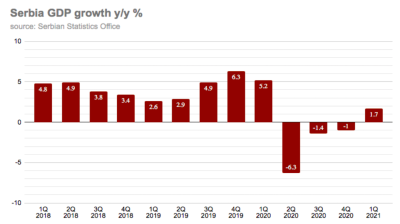 Serbia’s economy will grow by at least 6% in 2021, Prime Minister Ana Brnabic said on June 9.

Serbia was one of the countries in emerging Europe least affected by the coronacrisis in 2020, and is expected to achieve strong growth this year.

According to Brnabic, in addition to the robust rise in GDP, average salaries in the country are expected to overtake those in Bulgaria, the poorest country in the EU.

If calculated according to the Swiss formula, from January 1, 2022 pensions will increase by 5%, provided the positive trend in GDP growth continues, Brnabic added.