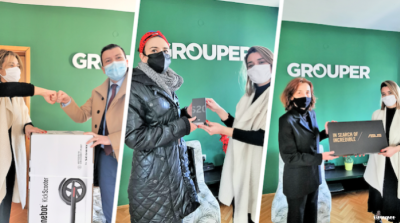 Grouper (grouper.mk) was set up as a startup by former ex-finance minister of North Macedonia Nina Angelovska in 2011. / Grouper
By Valentina Dimitrievska in Skopje October 10, 2022

Serbia’s Ananas E-commerce announced on October 10 it officially became the owner of the Macedonian online shopping brands Grouper.mk and Paopao.mk, after it acquired 100% of Vebspot company from Payten.

Ananas’ CEO Marko Carevic said in a LinkedIn post that the company’s plan is to offer the largest marketplace in North Macedonia with a wide range of products, as well as safe and fast delivery.

Grouper.mk sells vouchers for services, while the recently launched site Paopao.mk is an online marketplace.

"The acquisition of Grouper, as the leading e-commerce player on the Macedonian market with almost 300,000 users and 3,000 merchants, represents Ananas' first step towards regional expansion," the company said.

This acquisition will also enable Ananas E-commerce to quickly penetrate the Macedonian market with the introduction of Ananas' new concepts and novelties.

"With this acquisition, the market in Macedonia, customers, but also online sellers will get a safe, loyal and long-term partner, ready to invest in the development of this business,” Carevic said.

When it started operations, Ananas announced that the Serbian market was only a starting point, and that the ambition of the company is to expand into Western Balkans markets.

Grouper (grouper.mk) was set up as a startup by former ex-finance minister of North Macedonia Nina Angelovska in 2011.

In September, Angelovska announced that she joined the team of Ananas E-commerce as international business development executive.

Bloomberg Adria reported in September 14 it had information that Ananas E-commerce, owned by Delta Holding, was buying Grouper and had informed Serbian Commission for Protection of Competition about the concentration.